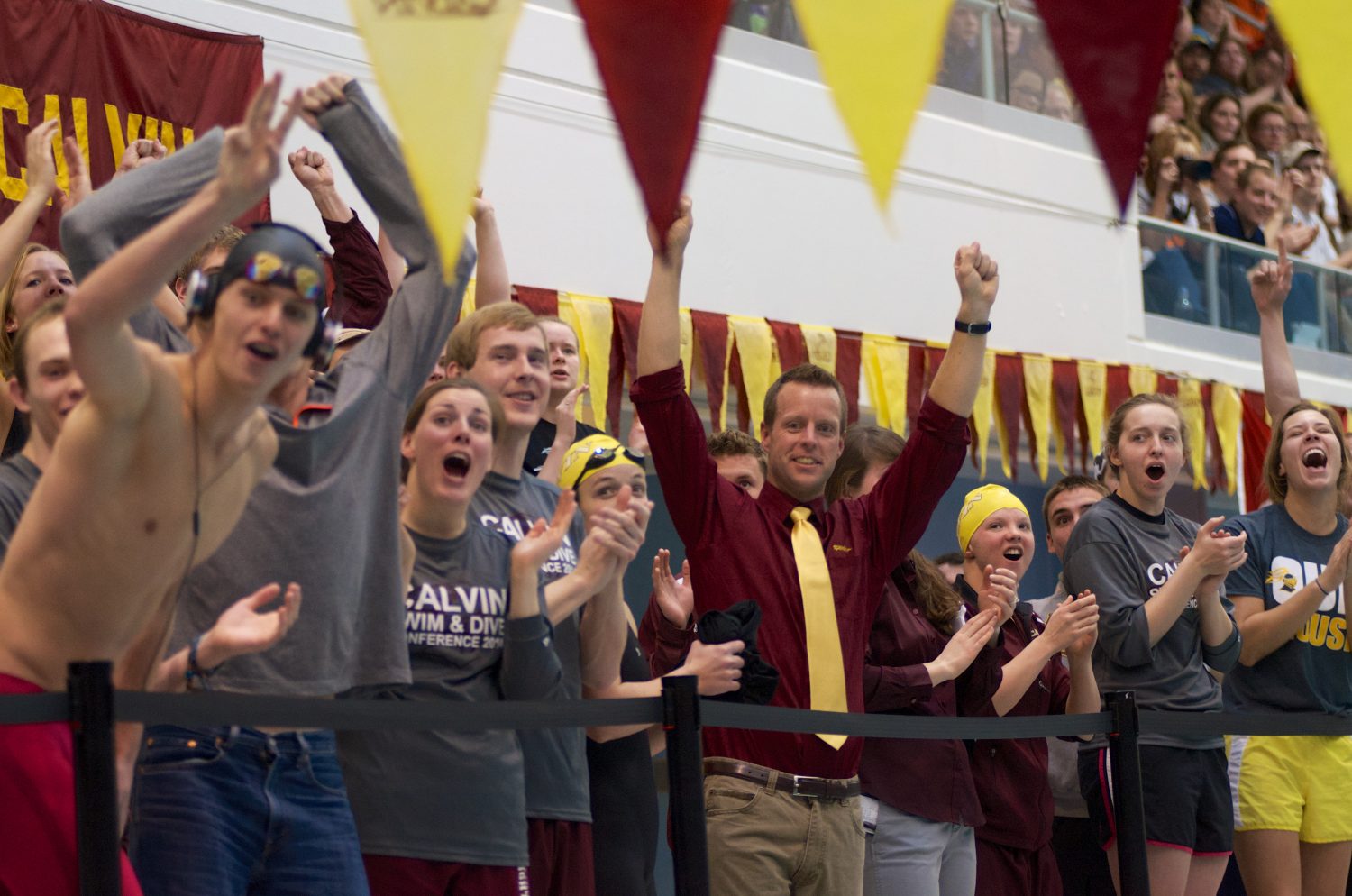 Coach Daniel Gelderloos has been Calvin’s head men’s and women’s swim and dive coach for the past 19 years. Since 2005, he has led the women’s team to 10 MIAA titles in a row.

Gelderloos, a Calvin alumnus, swam all four years of his career. As a senior in 1994, he was the captain of the men’s team; the team finished fourth overall in the MIAA ranking.

“Swimming has always been a big part of my life, and I was always around water as long as I can remember,” Gelderloos said. “I grew up hanging out at the neighborhood pool every summer and started swimming with their summer team.”

However, Gelderloos was not always a competitive swimmer.

“I didn’t get serious about competitive swimming until I started high school, as soccer was my sport through eighth grade.” When he did start to get serious about it, he swam the 200 fly, 400 IM and 200 backstroke. He also swam “the events nobody likes to swim.”

Just two years after graduation, Gelderloos came back to his alma mater and took the position of head coach for both the men’s and women’s swim teams. To him, this was an opportunity that he could not pass up.

He found his passion for coaching when he was 16 and coached eight-year-olds. He had a knack for making practice fun and challenging, as well as getting the kids to listen to him.

“I tried my hardest in college to tell myself I was an engineer and then a geologist. I was always coaching something on the side, and I was good at it,” Gelderloos explained. “I loved Calvin as a student and, at the time, the swim team was not in the best place; I thought I could make a difference if Calvin gave me a chance, and they did.”

Gelderloos is well-liked and highly respected by his swimmers, in part because he never fails to integrate faith into every practice and meet. He reminds his swimmers that “at Calvin we are challenged to integrate our faith in all that we do, which is always a rewarding challenge. I tell the team that just because we are at Calvin, our faith doesn’t automatically grow.”

There are three main things that he wants his swimmers to leave with after their four years of swimming under his coaching.

“First, build relationships. The deeper we know each other, the better our grades will be, the stronger our faith will be and the faster we will swim. Second, we want to be courageous enough to set big enough goals that force change,” he said.

“I want my athletes to leave Calvin four years stronger in their faith, four years better as a swimmer and equipped to go make a difference in God’s world. Finally, I hope to be a positive influence in my athletes’ lives; however, I do not want to run them.”

Coach Gelderloos is very humble in regards to his success as a coach.

“Personally, I don’t look at myself that way. I see myself as someone who is doing their best to be the best coach, husband, father and more on any given day; I don’t feel like I go home ‘winning’ on a daily basis,” Gelderloos said.

“There is always something that I can do better on any given day. I will say that I am annoyingly consistent. I don’t like to miss a workout, miss church or be late; I eat almost the same thing for breakfast every day. Maybe that has something to do with it. [But] more importantly, maybe it’s because I love what I’m doing.”