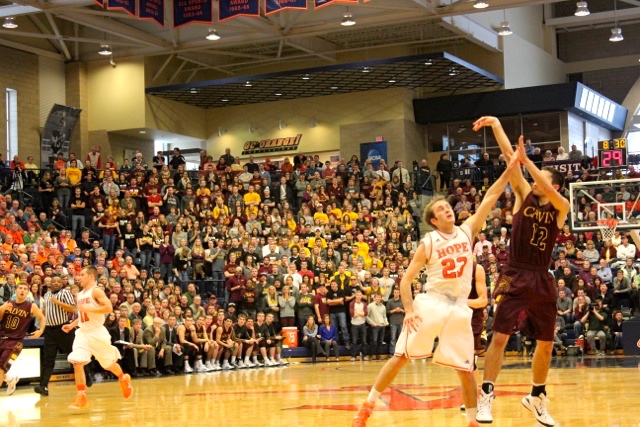 In their fourth highest-scoring game of the season, the Knights defeated rival Hope College by a score of 88-64. While only scoring two points in the first five minutes, Calvin came out strong after a timeout and overcame an early deficit.

This particular event caught the eye of New York Times reporter Scott Cacciola as he was “chronicling [his] sabbatical from covering the woeful Knicks as he checks out some of the good basketball around the country.” Cacciola gave a detailed overview of the history and nature of the rivalry between Calvin and Hope.

Senior guard Jordan Brink tied a career high with 29 points and scored five of the nine points in Calvin’s first offensive run of the game. Calvin ended the first half ahead and never allowed Hope to regain a lead.

Calvin’s offense shot 48.3 percent from the field but head coach Kevin VandeStreek was impressed with the team’s defense as well. The Knights forced 14 turnovers, 10 of which were steals.

“[Brink] is going to get a lot of accolades for scoring points, but I thought he did a fabulous job on Alex Eidson today who is a very good player,” he said. “[Eidson] had some shots he didn’t make but we also made him take some tough ones.”

After being down nine points only having scored two points, the Knights were able to take the lead 21-20 on a lay-up by junior guard Austin Parks. They finished the half with a 34-26 lead.

Hope was able to tie the game twice at 46 and 48 points but then the Calvin offense caught fire.

“I thought our reaction was great,” Brink said of how his team handled Hope battling back. “We stopped them right there and turned the game our way again.”

Brink gave the Knights four points before Hope scored two, then sunk a three with just under 10 minutes left. Junior guard Jordan Daley followed up 30 seconds later with another three giving the Knights a 58-50 advantage.

Once the Knights passed the 60-point mark, they never saw their lead fall below double digits. Aside from Brink, leading scorers were senior center Daniel Stout and Daley with 10 followed by Parks with eight.

This game was another chance for the teams to get experience playing together according to VandeStreek. Citing new roles and new players as pieces that need to fit in VandeStreek said, “I thought if we [were aggressive and determined] we would have a chance to be in the game, and we certainly did that.”

The Knights will take the court again next Wednesday at 7:30 p.m. at Adrian College.

This article has been updated to incorporate interviews with the players and the coach.