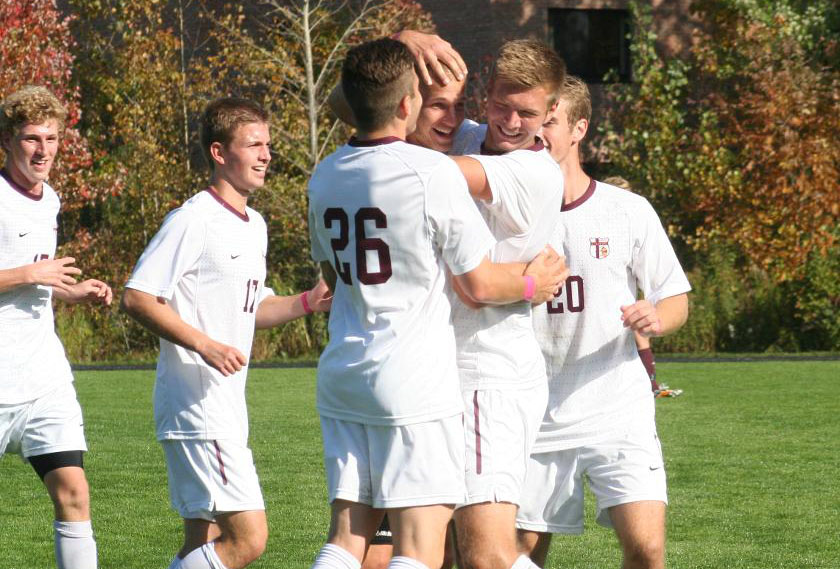 Calvin’s men’s soccer team won the MIAA Championship against Kalamazoo College 8-7 after nine rounds of penalty kicks, making this the second year that penalties decided the champion. In volleyball, the Knights took Hope to five sets at the DeVos arena and came out victorious. With these victories, Calvin secured automatic bids to the NCAA tournament.

In soccer, junior goalie Nike Giantsopoulos made two saves in the shootout to propel the Knights to victory.

“To be honest I was disappointed at how I wasn’t saving as much in the first five, but I tried to get myself back into it, and stay focused,” said Giantsopoulos. After saving Kalamazoo’s last shot, he said, “It paid off.”

Both teams put up a fight throughout the game, scoring one goal apiece in the first half and putting up double-digit shot totals, but Calvin had more opportunities with eight shots on goal compared to Kalamazoo’s two.

Sophomore midfielder Isky VanDoorne gave the Knights the lead in the 34th minute after senior Travis Vegter sent a through ball to the right side of the 18 line. VanDoorne took a touch to get away from defenders and sent his shot into the far netting.

Kalamazoo equalized minutes later on a corner kick. In the 37th minute, a header from a Kalamazoo player found its way into the corner of the goal.

Coach Ryan Souders praised his team for being committed throughout the game, but also spoke well of the opposition: “They’re a tournament-worthy team. They’re coached well, [and] they’re committed to their cause.”

After the win he added: “I’m going to sleep a whole lot better tonight and tomorrow night now that our name will be somewhere in the bracket.”

Junior outside hitter Maggie Kamp played big roles on the offensive and defensive side of the net collecting 22 kills and 16 digs for the Knights. Kamp hit .404 on the night. Sophomore middle blocker Laura Danhoff added 14 kills and blocked hits three times with the help of a teammate.

Despite a strong outing, the Knights were close to losing their MIAA title in the fourth set. Down two sets to one and with the score locked at four points apiece, a kill from Danhoff gave the Knights a lead that they would build on. Hope took a one-point lead two times early in the fifth set but was unable to go on a sufficient run to match Calvin, which secured the match with a seven-point difference.

With over 2,200 fans in the arena, the atmosphere was thick with the energy that goes along with most rivalry games. In a postgame press conference, coach Amber Warners reflected,

“The atmosphere is awesome and the support in the community is incredible.”

With the victories, both teams advance to the NCAA tournament. The volleyball team will defend their title on the road, while the soccer team will start their quest for a national title at home.