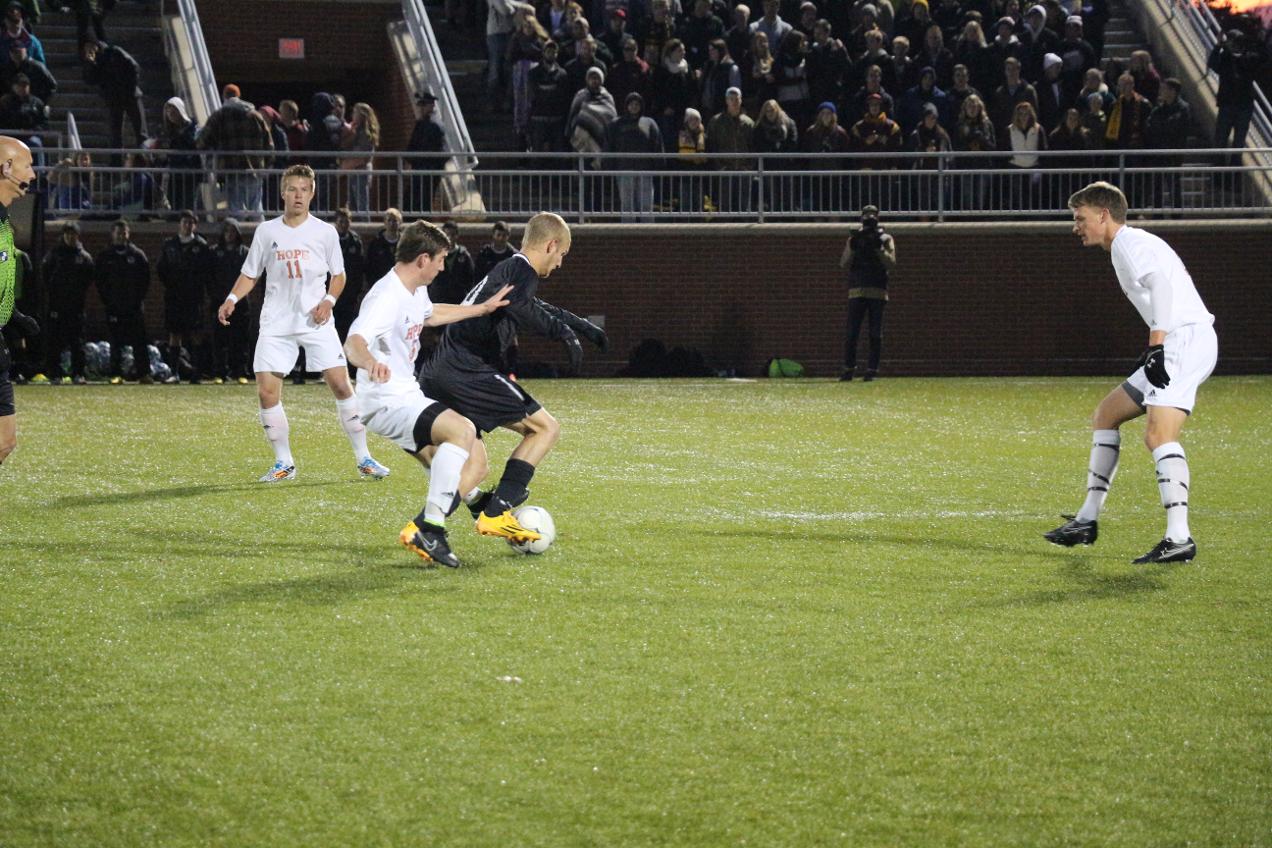 After shutting out Adrian and rival Hope, Calvin men’s soccer clinched their fourth consecutive outright MIAA championship. They have had at least a share of the title each of the past eight seasons.

Ranked seventh in the nation, the Knights went to Holland last Saturday to take on the Flying Dutchmen of Hope College. Two second-half goals by senior Travis Vegter and sophomore Isky VanDoorne as well as a tight defense secured the win. Offensively, the Knights looked more potent the whole game, putting nine shots on goal compared to one for the hosting Dutchmen.

In their next match, the Knights had an opportunity to clinch a guaranteed share of the MIAA conference title. Combine that with a Hope loss and they would be the outright champions.

That is precisely what happened. Sophomore Stephan Hooker led an assault on the Adrian goal with a hat trick as the Knights defeated Adrian six nil and Albion conquered Hope in overtime 3-2.  Senior Sean Broekhuizen and Vegter added goals in the Adrian game and junior goalkeeper Niko Giantsopoulos collected another clean sheet needing to make only one save.

Under the leadership of Coach Souders the past three years, the Knights have not wavered in their dominance of the MIAA. His overall record is 44-11-2 and the teams had a goal differential of 111 over the three seasons.

With three games remaining, the Knights will have some room to work out any kinks before they compete in the MIAA Tournament with a chance to earn the automatic qualifier for the NCAA tournament.

“I’m really excited about the conference title,” said Souders. “The MIAA is a really difficult conference and to win a championship is always a huge deal. We set goals at the beginning of the season and we still want to achieve those. Part of that means finishing these last three games well.”

The last three games of the season are against Trine, Albion, and Olivet with the latter two games at home. Olivet has the best overall record at 8-8-0 and is the last scheduled game for the Knights in the regular season. They were able to score 12 goals in the first matchup against these teams and only conceded one to Olivet.

Calvin has a diverse selection of attacking options with Broekhuizen, Vegter and a few others who have collected 10 or more offensive points and may look to expand their options as the move the ball down the field. They have scored 53 goals on the season.

Defensively, they will look to continue perfecting a defense that has only allowed eight goals the whole season. They have given up multiple goals in only one game against Wheaton who is still ranked at 13 in the nation. That game was televised, so the team may continue to use their mistakes as a building block.

Souders added he was very proud of what the team has accomplished this far but added, “we don’t want to be done yet. We want to continue to build and move forward.”