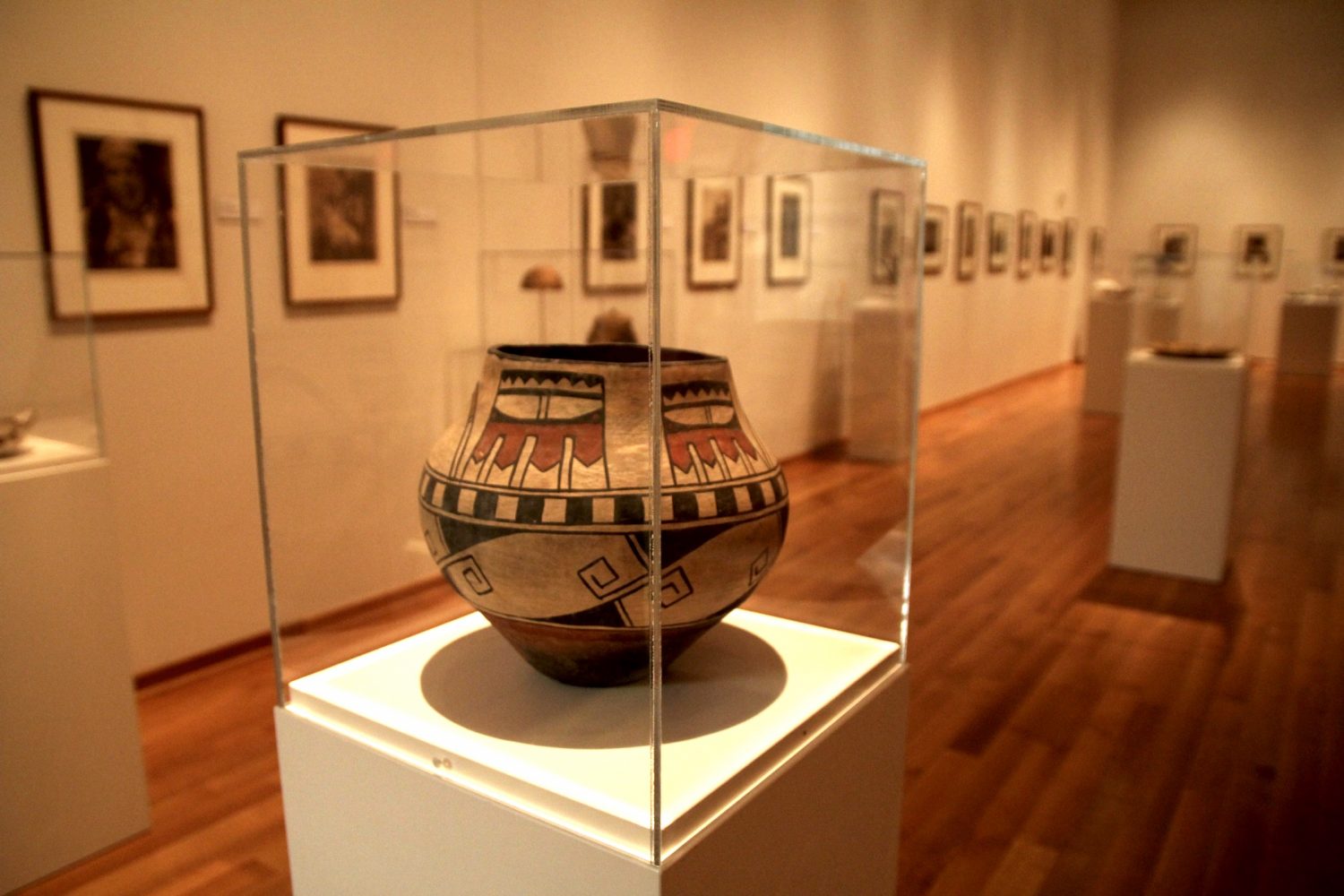 In honor of Native American History Month, Calvin’s Center Art Gallery is showcasing “Tracing the Past: Edward Curtis and The North American Indian,” an exhibition that brings together Native American historical artifacts and the work of early twentieth century photographer and amateur anthropologist Edward Curtis.

From Oct. 30 to Dec. 20, the gallery will display 40 of Curtis’s original photographs from his collection “The North American Indian” alongside 24 Native American artifacts similar to those represented in the pictures. The exhibition is sponsored by the Mellema Program in Western American Studies.

The artifacts, which are on loan from the Grand Rapids Public Museum, range from spoons to hats and snow goggles — all from the same time period as the photos that accompany them.

“When you look at a hat [in the exhibition], you’re looking at the same kind of hat from the same time period as the hat the person in the picture next to it is wearing,” said Joel Zwart, director of exhibitions for the gallery. “I wanted there to be that connectivity in the exhibition.”

Although the exhibition only features 40 of them, between 1906 and 1936, Curtis took more than 800 photogravures of Native Americans in the western United States. He released the photos in a series of bound books to subscribers, one of which happened to be the Muskegon Public Library. The set is now housed at the Muskegon Museum of Art, which lent Calvin the photos for the exhibition.

The expansive series was Curtis’s attempt at documenting what he saw as a dying way of life.

“Curtis believed Native American ways of life could not transition into the modern world and were fated to disappear,” explained Calvin history professor William Katerberg. “He admired their way of life and began this project because he wanted to document it before it disappeared.”

“There is skepticism because a lot of [Curtis’s work] was in some ways contrived. If Curtis did a portrait of a native, he wanted them to be in their Native American clothing, and he was going to pose them in certain ways to fit into his idea of what a Native American should be,” Zwart said.

However, Zwart emphasizes that Curtis was a product of his time:

“He was working in the confines of his time period. His intentions were good, even though what he presents is an image he wanted to portray of Natives, not the reality.”

Katerberg adds that some Native Americans actually helped Curtis with the project:

“[We shouldn’t] ignore the role of the Native Americans involved in his project. Curtis depended on Native assistants, who visited local communities before he arrived, helping him establish a relationship with local people. And local native people often had their own reasons for allowing Curtis to photograph them.”

In conjunction with the exhibition, Katerberg and Calvin art professor Lisa Van Arragon will discuss the historical context and documentary accuracy of Curtis’s work in a lecture at 7 p.m. on Nov. 7 in the Recital Hall.

“Curtis is part of a long history of painters that did portraits and paintings of Native Americans, who romanticized Native Americans as noble savages, seeing them as naturally uncorrupted and living harmoniously with land, in contrast to civilized people no longer living naturally,” said Katerberg. “In the lecture, I’m putting Curtis’s work in that context.”

The lecture is one of four programs planned in conjunction with the exhibition. William Wilson, who grew up in the Navajo Nation, will be speaking in the Recital Hall on Nov. 21 at 7 p.m. about his attempts to continue Curtis’s documentary efforts. There will also be showings of the films “Reel Injun” and “More Than Frybread.”

“Thinking about the ways Curtis’s work led to more well-being among Native Americans and the ways it contributed to their challenges is a great way to open up conversation about Native American identity today,” she said.

Haney knows from personal experience how valuable that dialogue can be. Before she came to Calvin, Haney ministered in a predominantly Native American community, where she was one of just two non-Native American pastors in her class. She is also married to a Native American and is active in the Native community of the Grand Rapids area.

“I have been able to have rich, generative, meaningful conversations with people who have experienced a different reality than me,” she reflected. “That’s allowed me to see more of how God is working in the world, and to see the sources of injustice in our societal structures. I’ve also seen the ways I contribute to that through denial and what I might do differently.”