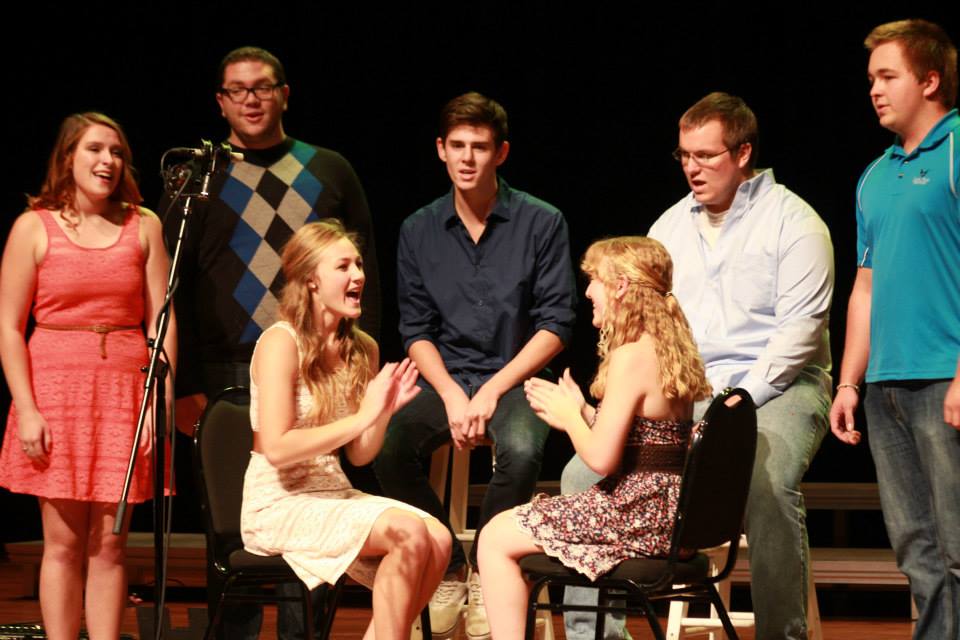 Once a year, Calvin’s Capella choir participates in an event called Late Night. Here the choir changes up their classical style and delivers a performance of popular songs. This year, they wowed the sold-out CFAC auditorium with their own arrangements of hits ranging from Neighbourhood’s “Sweater Weather” to Lana del Rey’s “Young and Beautiful” to Coldplay’s “A Sky Full of Stars.” They performed 18 numbers, some of which were duets, while others were trios or solos. Throughout the show, audience members cheered for and catcalled their favorites.

“The audience really makes the show,” said senior choir member Jenny LaJoye. “It’s loud, it’s rowdy and it’s a blast. It’s not normal for us as a choir to have that kind of audience. This is the only event we get where people are rooting and hollering when we walk on stage. It feels like relief; it feels like excitement. It’s worth it.”

director involved. They schedule their own rehearsals on top of the four usual choir practices per week.

“We all spend a ton of energy putting this together. It’s a collaborative effort and a huge bonding experience,” said LaJoye.

“It’s great,” said junior Kelvyn Koning. “It’s one of my favorite parts of the week. Coming in [to practice] just makes me really happy. It’s definitely a community, and everyone meshes really well together.”

The night was tied together by comedic hosts Michael Ribbens and Jared Haverdink, who constantly had the audience erupting in laughter.

“It was worth my five dollars; that’s for sure,” said first-year student Chase Rohrer.

This year’s concert brought in a spark of new musical style. Since a very high percentage of last year’s choir has since graduated from Calvin, this year has brought a hefty addition of first-year students.

“It’s a really young group this year, which is exciting. There’s a lot of fresh ideas and fresh energy going into the show,” said LaJoye.

“To see them take numbers, arrange them and take the creativity into their own hands makes me super proud. It’s just a blast. I’m beaming with joy and pride for all of them,” said LaJoye.

It seems that not only can Capella can work hard to pull off a stellar performance, but they have fun doing it too.

“Talking together, singing together, laughing together, it’s just really great,” said Koning. “It’s definitely one of my favorite parts about being at Calvin.”

The money for the tickets is put into a fund for the international tour that takes place every four years. They are preparing for their next trip in the upcoming school year.

“It’s for those bigger international tours that require more money that require students to pay for part of it,” explained Hoerr.

This pop show might be the end of a huge work from Capella, but when it comes to stage performance, they are just getting started for the year.

“This is a really great show,” said Hoerr, “but know that this isn’t all Capella does. I would love to see more students at some of our more classical concerts.”