Discussion about Sabbath extends beyond issue of library hours 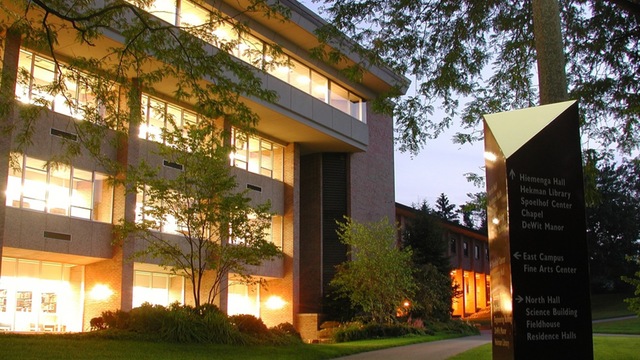 Despite recent discussions about opening Calvin’s library on Sunday afternoons, there are no immediate plans to implement Sunday hours, pending further discussion.

This past spring, the Hekman Library Committee gave its approval to a trial period of Sunday hours. However, at the end of this past school year, the decision had not been approved by Calvin administration.

According to Glenn Remelts, the dean of the library, there have been no conversations or developments since then on this issue.

“It will be discussed again, I think it’s a serious issue. We just need some more time to talk about it,” said Le Roy.

“We want to be wise about this,” said Pastor Mary, who has been involved in ongoing discussions about Sunday library hours in the larger context of keeping the Sabbath. “Wisdom is rarely found when we rush. It’s found in community, and when people go to Scripture together and pay attention to what God wants us to pay attention to.”

The importance of Sabbath is not an unfamiliar or unwelcome topic to Calvin students.

“I’m definitely an advocate for observing the Sabbath, and I don’t want to make anyone work extra on the Sabbath,” said sophomore Mackenzie Geels.

Several students highlighted the fact that many people do use Sunday as a day to finish work, regardless of whether the library is open or not.

“The library provides a quiet place of study, academic resources and a place for people to accomplish work on a day in which, frankly, a lot of schoolwork is being done already,” pointed out junior Kylee Rosette, a student employee at the library:

“Opening the library for even just a few hours will enable students to be more efficient and productive, potentially allowing them to take time off the rest of the day.”

Sophomore Kelsey Powers discussed the challenges of finding a place to do computer-related homework on Sunday.

“I don’t have a computer, so if I have homework on the computer on Sundays, I go to the [residence hall] basement and see if any computers are open … Because of this, it would be nice to have the library open on Sunday for a couple hours.”

For Pastor Mary, the issue at hand is not primarily about Sunday library hours but about how Calvin College as an institution approaches the discussion of Sabbath:

“We want to listen well to what our students, professors and staff members are saying. But how do we as a college shape a culture in which rest and saying no are seen as values? Because what’s seen as value is ‘I’m so busy.’ How do we undo that? God didn’t design us to be frantic.”

Some students acknowledge that, regardless of their opinion on the topic, they wouldn’t use the library on Sunday even if it were open.

“The issue of the library being open or closed on Sunday seems to be one where people are more passionate about the fact that the library shouldn’t be closed, and they aren’t necessarily interested in using the library on a Sunday,” said sophomore Landon Sterk. “The fact that it isn’t an option is a bigger deal than whether I would use it or not.”

As a way of engaging student questions and concerns about work-life-rest balance, Pastor Mary says campus ministries is working on a study for the first six weeks of next semester that focuses on these topics.

“We want to be responsive to students and give them every resource for developing a life that reflects the values that God wants for his people. Whether or not the library is open on Sundays is only a small piece of this discussion.”