45 Years of Chaos Day: The Making of Calvin’s Coveted Competition 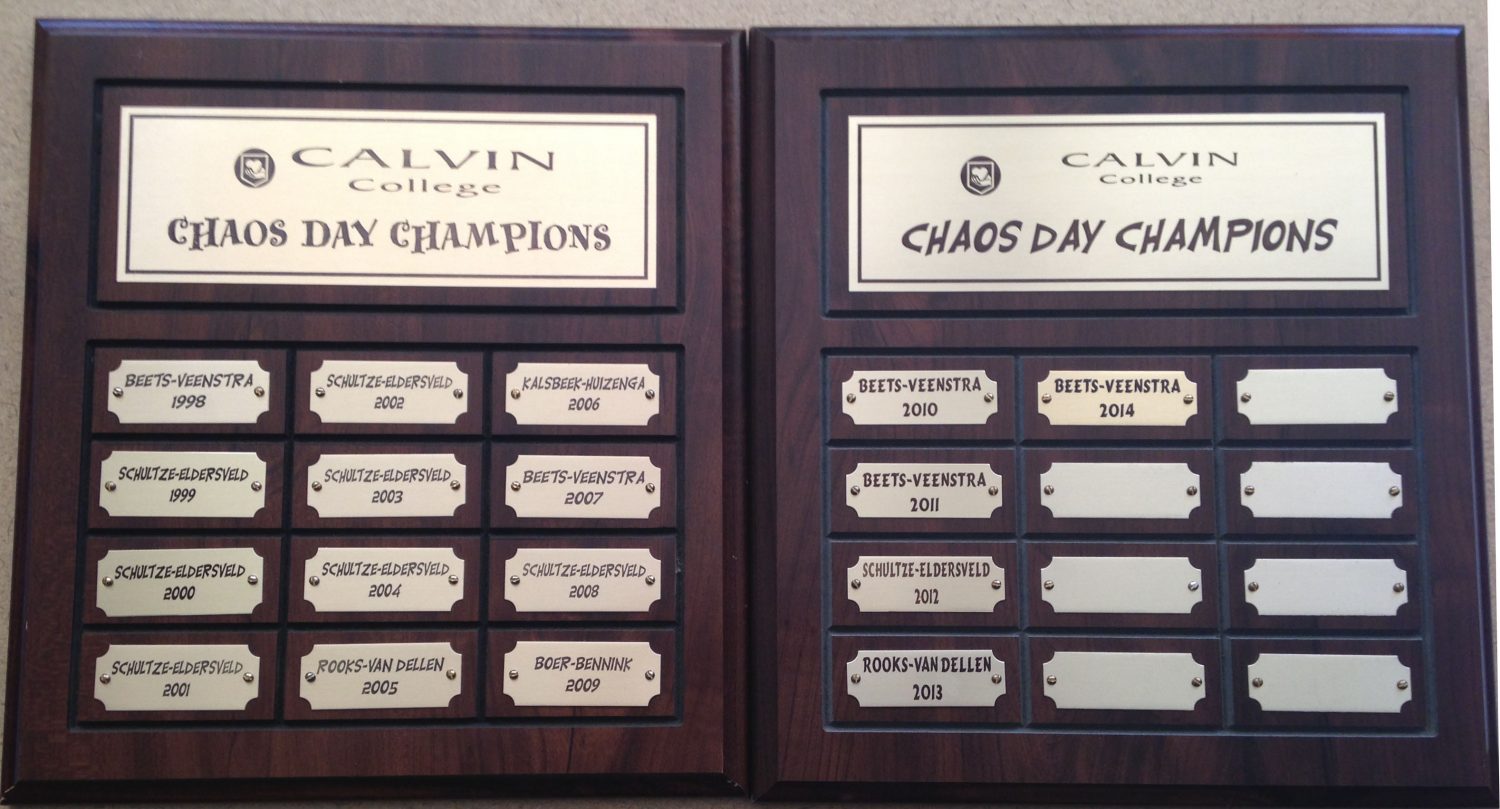 During a pivotal scene in the film “Dead Poets Society,” a teacher takes his English class to the school’s trophy room and asks them to look at the photos of their previous classmates, making the point that no matter how old the photos are, they all show young men full of hope, potential and dreams — not that different from the boys themselves. “Carpe diem,” he says, pretending to be the voices of the faces in the photographs, “Seize the day boys; make your lives extraordinary.”

Looking through old Chaos Day articles in the Chimes archives, the situation isn’t that much different. Current Calvin students may stay away from feathered bangs, mullets and scrunchies, but the looks of triumph captured on film are timeless.

Chaos Day originated in 1969 after a meeting of staff advisors and the dean of men.  Calvin alum Andy De Jong (‘61) was a student staff advisor in Noordewier-VanderWerp (when Noordewier was still a men’s dorm).  De Jong explains that Chaos Day came about not from a need for “any more chaos given the social & political upheavals that marked the 60s,” but rather as a source of college comradery.

“It was determined,” he said, “that having some friendly competition among the dorms playing classic games such as three-legged gunny-sack racing, running while carrying an egg on a spoon in one’s mouth and, of course, the proverbial tug-of-war rope completion would help build dorm community.”

Chaos Day at its inception looked significantly different than it does today. Instead of trophies, the winning dorm was “awarded special ice cream treats,” according to De Jong. Universal themes and pageantry didn’t enter the equation either during that first year.

“It was not until the second and subsequent years that dorms began to generate themes and special [t-shirts] and team songs [and] cheers and did the dress-up stuff,” recalled De Jong, “I do remember a few guys doing some body paint.”

The name “Chaos Day” was initially intended as a temporary title for the games, but it stuck.

“Maybe it reflected the general mood of the broader society,” reflected De Jong, “but [it] also described the ethos of incoming freshmen who felt life had suddenly become a bit chaotic over against the more routine and predictable days of high school.  Given its long legacy, it appears that Chaos Day continues to generate some excitement and dorm-spirit, especially among freshmen.”

Indeed, Chaos Day is now one of the most celebrated traditions shared by the Calvin student body, though it has undergone some significant changes throughout the years.  John Witte, dean of residence life, related how “the games used to be announced ahead of time and the dorms were able to practice. But then it became high pressure and unless you were athletic you really couldn’t participate.”  So they began to add random events.

“It went so well that in two or three years, no one knew what games would be played, except for the tug of war,” Witte said.

In fact, tug-of-war is the only event on which students can depend any given Chaos Day.  When asked about this, Witte laughed and responded: “We paid a lot of money for the rope. It also gives good breaks in between events. It gives time to set up and tally points. It’s a tradition within a tradition.”

Many of the changes made to Chaos Day come from trial and error.  Witte reflected fondly on the many escapades and injuries inherent in the enthusiasm of several hundred 18-20-year-olds in one place.  “I’ve seen plenty of injuries,” said Witte, “from blisters to concussions. One year we played a game where we drew a big circle and 25 students from every hall stood around it and had an area where they had to get to. Seven times 25 equals mass collisions, especially when some halls decided, ‘let’s tackle other teams so they can’t get across.’ It turned out badly, and we didn’t do it again.”

In 2004, student Miram Maring questioned in a Chimes article:  “Who came up with the idea to stick four people in an inner tube and make them run down the field with a volleyball between them?”  We haven’t seen that game in a couple years.

While the events of Chaos Day differ from year to year, the attitude of dorm pride is always as strong as the cheers that rung out over the din last Friday night.

“Ultimately, the fun for Chaos Day is the love for your hall that drowns out everything else. It’s the only time students feel that proud about the name of their hall (and see everyone else as the enemy),” Witte joked.

The winning dorm the first year was Noordewier-VanderWerp.

“One year,” Witte added, “the president of RVD, Ben Ardec, arrived by helicopter.  Their theme was ‘the A team.’  It was very dramatic.”  After that, it almost didn’t matter who won.

But beyond dorm pride, Chaos Day has been the springboard for connections that last far beyond September and even beyond graduation.

“I could lengthen my list of relationships that still exist because of dorm camaraderie,” said alum Rachel Aupperlee, ’92. “[Chaos Day] certainly started that sticking process.”

Aupperlee didn’t remember the exact events she competed in, but after trooping across the soccer fields to the land now occupied by the Prince Conference Center and nature preserve, it was all fun and excitement.

“We screamed until we were hoarse and came back around lunch time completely exhausted,” she reminisced. “The first weeks at Calvin were the most exhilarating [at] that point in my life.”

While alumni and current students alike can attest to the excitement and thrill of competing in Chaos Day, one might think back to that thought-provoking scene from “The Dead Poets Society.” Perhaps, at the bottom of it all, behind the cheers, the games, the fun- something larger is at work.  Something grander. Chaos Day is more than a tradition; it unites us as a Calvin Community. it’s an event linking the generations together in an unlikely way. For the last 45 years, students have been declaring dorm pride — students who come from all sorts of backgrounds, nationalities and skill sets. But, they all had one thing in common. Dreams. Goals. Aspirations.