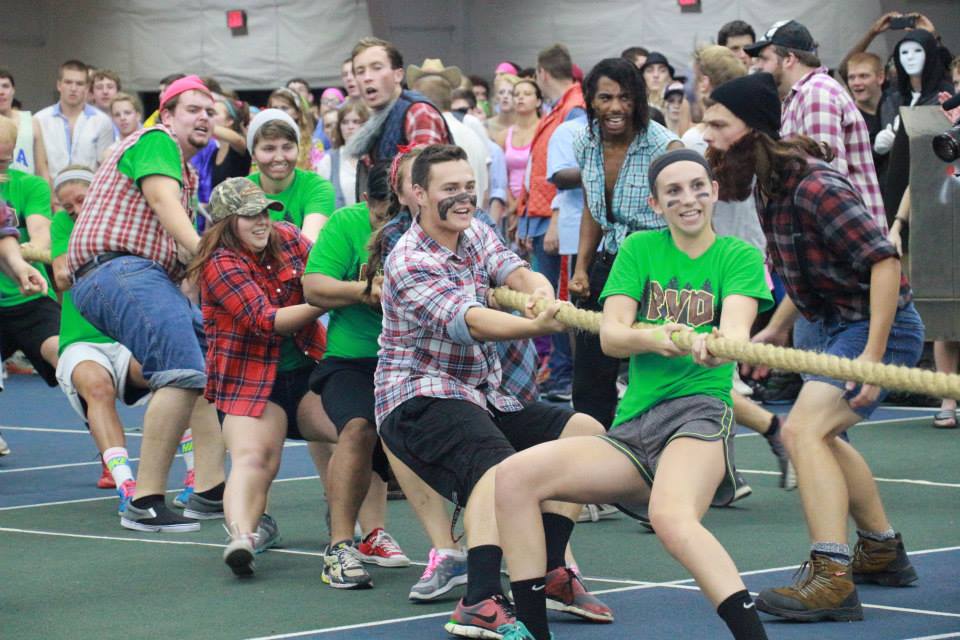 In a major comeback after coming in sixth at last year’s Chaos Day, Beets-Veenstra (BV) emerged victorious in this year’s event. Trailing behind the Harry Potter-themed dorm was last year’s victor, Rooks-VanDellen (RVD), and Schultze-Eldersveld (SE).

The winner of the cup of participation this year was Boer-Bennink (BB) with 82 percent of the dorm present.

A new trophy named “the cup of decorations” was awarded to the best costumes and best dorm window decorations. This year’s winner was Kalsbeek-Huizenga-van Reken (KHvR), which had a Mario Kart theme.

Last-place winner Noordewier-VanderWerp (NVW) was the recipient of this year’s cup of perspective.

“It was beyond amazing to bring home a victory for BV this year. It helped to have the unbeatable theme of Harry Potter, which allowed our RD to summon victory using the ‘accio’ spell,” said Hulst. “I couldn’t be more proud of my dorm, and even if the cold I have came from screaming my head off on Chaos Night, I’d do it again without hesitation.”

As part of the 45th annual celebration, this year’s Chaos Day was held at night, earning it the nickname “Chaos Night” among underclassmen.

The change in schedule emerged after Grand Rapids’ annual Celebration on the Grand was moved to the Fourth of July weekend. As a result, weekend programming approached residence life to fill the then-vacant Friday night activity slot for the first week of classes.

“It’s always a risk to change tradition,” said John Witte, dean of residence life. “We had talked about having a Friday night Chaos Day in the past, and the precedent of the last two years was indoors because the weather was sketchy, so we said, ‘Let’s try it!’”

The new date and time also aimed to get more students to participate.

“It’s a good option for students who had conflicts Saturday morning with work, or just didn’t want to get up early. We can always change it back if needed,” said Witte.

However, one downside of the change, to the dismay of freeloading upperclassmen, was the elimination of the annual Chaos Day cookout.

“Each hall went back to do its own social event [instead],” said Witte.

For sophomore Caroline Ray, some unique aspects of holding Chaos Day in the morning were missing.

“I liked last year when they woke us up; it was chaotic,” said Ray.

The new time yielded some changes to the structure of the games itself. For instance, events now featured glow-in-the-dark objects as part of the competition with all the lights in the venue turned off.

In the end, Witte believed the event to be a success.

“The energy was great, and each hall had the right perspective on the fun and frivolity of the event,” said Witte.  “There’s not a whole lot of deeper meaning to Chaos Day, but as a way to bring together our community in a fun tradition, it was fantastic.”

The Calvin Moses also failed to make an entrance in this year’s Chaos Day following an altercation with students. Prior to the event, Moses reached out to the Chimes Facebook page citing Exodus 3:4, indicating it was planning to arrive.

JD Rocha, a junior who was among those involved in the pursuit explained that several upperclassmen had been awaiting the arrival of the statue of Moses.

“We gathered four of our trusted friends and headed out, in two cars, to the gym parking lot,” said Rocha. “While waiting for the van that Moses was in, we devised our plan to trap it in the middle of the road. But that plan did not come to fruition as Moses was inside the van instead of above it.”

According to Rocha, the van was successfully trapped for 10 minutes with both students and vehicles after the van backed up to the loading bay area and opened its trunk.

“All this time we were trying to pry open their hood to cut off their power and hopefully unlock their doors,” explained Rocha.

However the attempt proved futile as Campus Safety intervened, telling Moses’s vehicle to leave. A response from the Calvin Moses twitter page quoted Exodus 18:13 “…and the people stood about Moses from the morning until the evening.”

The official results for the event are as follows: