Daniel Herrick chosen as Professor of the Year by graduating class 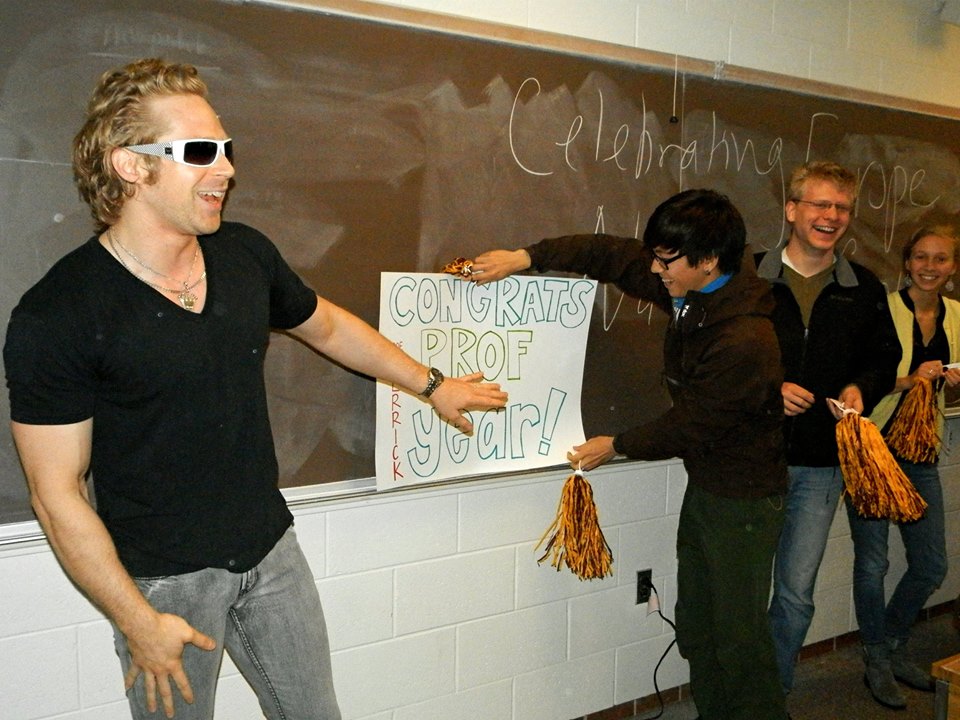 The professor of the year award for 2014 was awarded to philosophy professor Daniel Herrick. The award from the outgoing senior class was presented in the traditional fashion Wednesday by surprising him during one of his classes.

“Of all the professors I’ve had, Herrick is probably one of the most enthusiastic about his students,” said Steven Barre, a junior philosophy major.

A crowd of 20 or so students, as well as a few professors and Herrick’s wife and parents, showed up to surprise Herrick.

“I didn’t think it was possible for my class to be more bizarre or emotional,” Herrick said after the cheering students had filed into his classroom. “This just blew my mind.”

Herrick joined Calvin in 2010 directly from graduate studies at Princeton University and has spent his time at Calvin focusing primarily on teaching.

His students especially appreciate Herrick’s personal concern for them.

“He reached out to me one-on-one this year,” said Barre. “That meant a lot to me, that a professor would reach out to me and say, ‘Hey, let’s talk about your life.’”

Herrick has also appreciated the students that he’s gotten to know.

“My favorite thing about Calvin is the students,” he said. “Calvin really has the best students I’ve ever seen or worked with. They’re so kind and encouraging and just good people.”

He’s also well-known for his engaging teaching style. When the students crashed his class, he was in the middle of Euro Day.

In a similarly light-hearted fashion, other students discuss Herrick’s strengths.

“He’s been informally awarded the best-dressed professor at Calvin,” said senior philosophy major Fellipe Do Vale, adding, “He can do more push-ups than any other professor.”

Do Vale’s admiration of Herrick’s physique, however, is not strictly accurate.

“In the spring of 2011, Kevin Corcoran beat me hands-down in a pushup contest,” Herrick admitted with a laugh. “And the story became myth and the myth became legend. Some say he has the strength of 10 men.”

Although Herrick has enjoyed his time at Calvin, he is planning on leaving after this year.

“I really feel like God’s calling me away from the academy, whether that’s for a short sabbatical or something longer, I don’t know,” said Herrick.

He doesn’t have any long-term plans for what he will be doing in the future.

“I really feel that I have to be intentional about setting this aside as a time of rest, although I do have a number of writing projects I’m working on.”

Because of this, Herrick is especially connected to the graduating class of seniors this year.