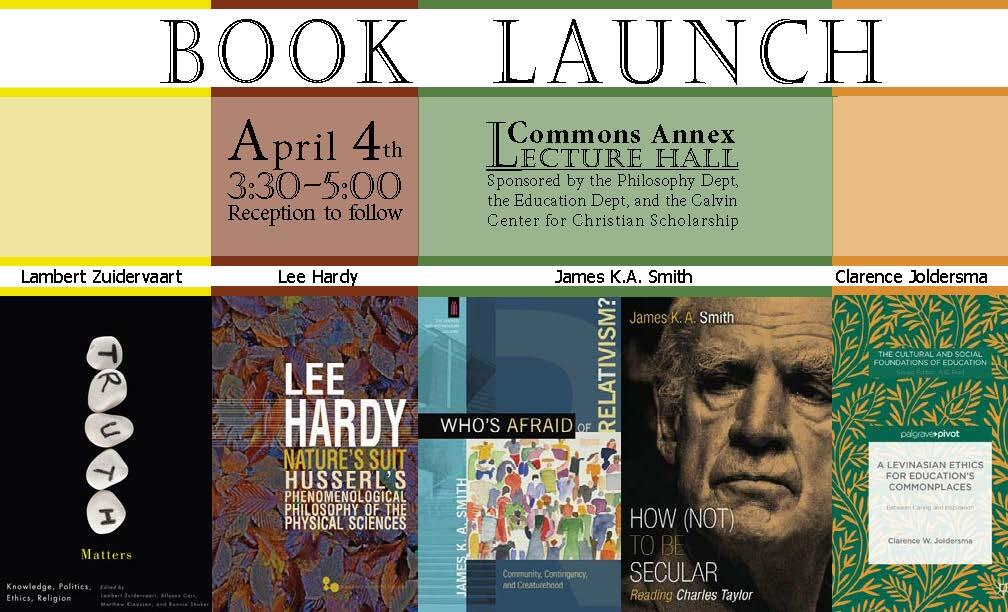 On Friday, in the Commons Annex Lecture Hall, Calvin’s philosophy and education departments hosted a book launch, featuring five works by current or former Calvin professors. In conjunction with the Calvin Center for Christian Scholarship, the launch officially released the following books to the public:

– “A Levinasian Ethics for Education’s Commonplaces: Between Calling and Inspiration” by education professor Clarence Joldersma;

– “How (Not) To Be Secular: Reading Charles Taylor” and “Who’s Afraid of Relativism?: Community, Contingency, and Creaturehood” by philosophy professor James Smith.

The gathering got underway mid-afternoon to a moderately attended room, filled with students, faculty and family members alike. All throughout the launch, a table in the room sold the featured books for a 20 percent discount.

After some brief introductory remarks, the four authors all addressed the audience, each speaking on their work and its inspiration. They also were sure to thank those who had helped on their projects.

Zuidervaart, now a professor at the University of Toronto, spoke first on “Truth Matters.” He explained that the attempt to define truth is a cornerstone of philosophy. He added a biblical connection, mentioning Pontius Pilate’s retort of “What is truth?” to Jesus when the latter, while on trial, claimed that “Everyone who is of the truth hears my voice” (John 18:37b). McGill-Queen’s University Press describes the book as a “pioneering study of why truth is important in philosophy, public culture and everyday life.” Zuidervaart echoed this and added that the book “takes a different perspective in getting at truth — it doesn’t try to give answers [as to what truth is].”

Professor Hardy opened his discussion of “Nature’s Suit” with some self-deprecating humor. Mentioning that his book was a cheaper price than Zuidervaart’s, he quipped, “I guess the old saying ‘You get the quality you pay for’ is true.” He also commended James Smith for publishing two books on his sabbatical, while mentioning that he himself had published one in two sabbaticals. As for his book, Hardy asserted that he holds a “minority opinion” in his study of Edmund Husserl, the founder of the phenomenological movement (a branch of philosophy that studies structures of experience and consciousness). While most who study Husserl see him as a metaphysical idealist and an instrumentalist, Hardy believes that “neither view is entirely accurate” of Husserl’s work. Hardy concluded by arguing, “This law of instrumentalism is not uncommon in our understanding of the physical senses.”

Professor Smith then mentioned that both of his featured books grew out of his sabbatical as well as his teaching. He first explained “Who’s Afraid Of Relativism?” as a sort of sequel to his earlier work, “Who’s Afraid Of Postmodernism?” Where the prior book focused on theories rooted in postmodern thought, Smith’s more recent work explores the concept of relativism, which holds that point of view has only relative or subjective value, not absolute truth. Said Smith, “We are sloppy with the way we throw around the term [relativism].”

Smith’s other book, “How (Not) To Be Secular”, grew out of a senior seminar he taught one year, which he called “one of the best teaching experiences of [his] life.” He and his students had used Charles Taylor’s “A Secular Age” as their textbook, but many readers find Taylor’s work overly written and unnecessarily complex. Thus, Smith’s goal was to publish a “compression and translation of, as well as a commentary on, Taylor.” Smith also included what he called “cultural hooks.” For instance, instead of using Taylor’s quotations of Penny Lee (“I still don’t know who that is,” said the professor), he quoted lyrics from the band Death Cab For Cutie.

Finally, Professor Joldersma talked about his work in “Between Calling and Inspiration,” which he said “grew out of a series of lectures.” Joldersma had twice previously attempted to publish this, but found no takers, as it is “not an article, but is not a long book,” according to the professor. Happily, he recently found an outlet through a friend’s publishing company. As for the book itself, Joldersma examines the state of learning in our society, by drawing a distinction between education and schooling. The two are not mutually exclusive, but “less and less actual education is happening in our schools,” he said.

The book launch was well-received, and the works by Profs. Zuidervaart, Hardy, Smith and Joldersma will undoubtedly continue to be a source of pride for the Calvin community. As of yesterday, all five works are officially published and are available to the general public for purchase.