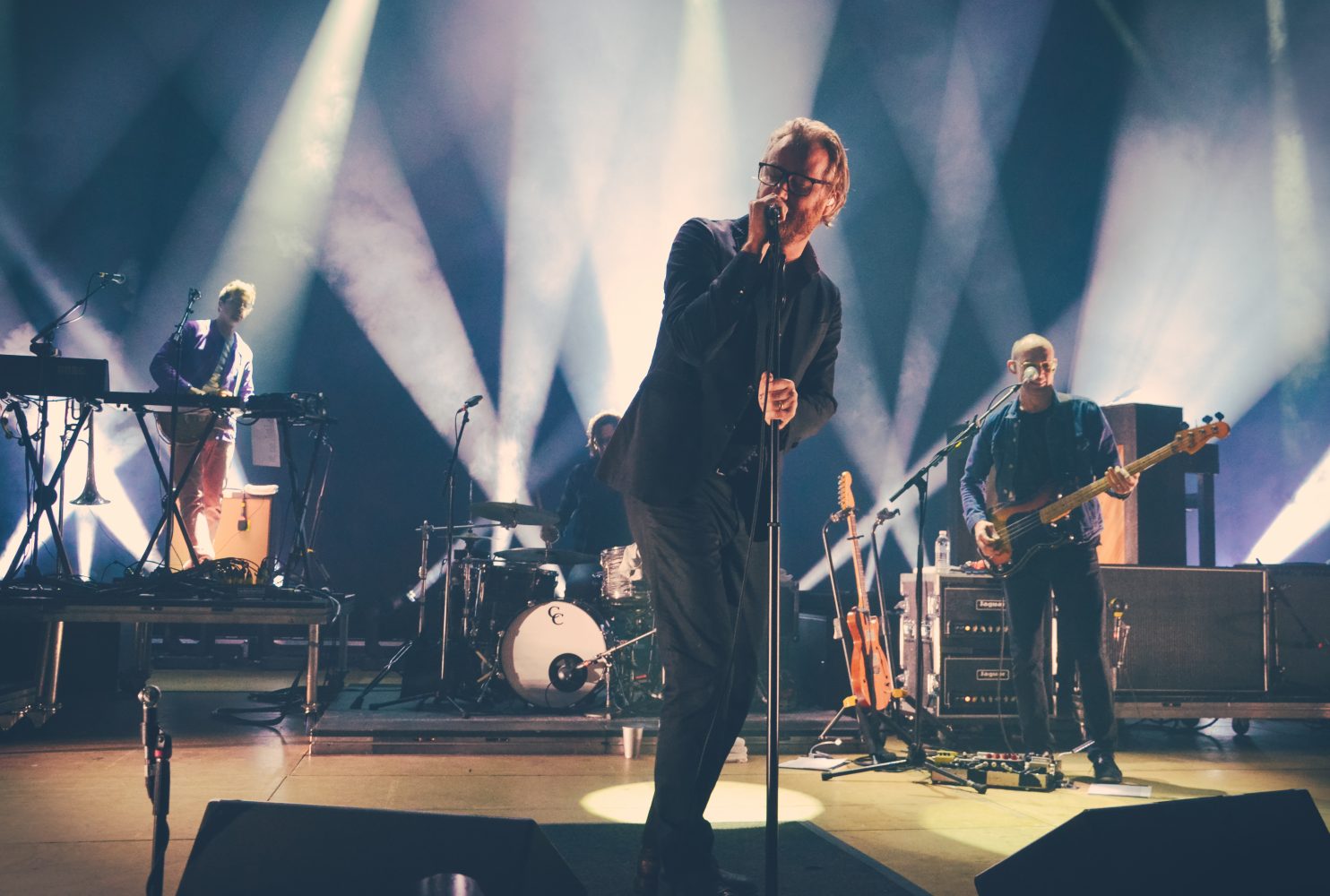 With lights aflutter, a wandering lead singer and enough electric guitar reverb to kill a small mouse, The National put on a booming show this past Saturday night in the Van Noord arena, having performed on Saturday Night Live (SNL) only a month before.

“Of the bands Calvin has had, The National is of higher acclaim with a bigger reputation,” said senior Trent Heille. “Having them perform at Calvin shows that we can get bands of that caliber and not just the rising bands.”

The last band of this caliber to play at Calvin was Fun., who had also performed on SNL before the show.

Formed in Cincinnati, Ohio, The National has since moved to Brooklyn, New York to focus on their music. Recently, their hit song “Lean” was featured in the latest Hunger Games soundtrack.

“After the release of their fourth album, ‘Boxer,’ their popularity really took off,” said Heille. Another of their songs, “Fake Empire,” was featured in Barack Obama’s 2008 campaign video.

Through their six albums, The National have explored issues of loneliness and self-loathing. In their newest album, “Trouble Will Find Me,” they have touched issues of faith.

“They’re spiritual without being exclusively religious,” said Heille. “No one seems to affirm their faith, but you can definitely see them struggling through it. There is a lot of doubt in their lyrics.”

Audience member Bridget Waldron said she found Matt Berninger, the lead singer of The National, to be an interesting character, especially when he voyaged out into the audience, trailing his microphone cord over the crowd.

“He’s such a weird guy,” Waldron said. “Very twitchy. I wasn’t sure if he was going to do the microphone thing. I saw him in Detroit last summer, and he did it. But he did it here and visited every corner in the auditorium.”

Kai Koopman, a Calvin senior, said Berninger has a distinct style, both musically and in his personality.

“I’ve come to know the band through various friends,” Koopman said. “So I was a little familiar before buying a ticket. It’s a band that takes a little while to get into. They come on more slowly. The leader’s voice — that’s the most dominant feature. The baritone drives home the melancholy trombone.”

The band, My Brightest Diamond, opened the show with an enthusiastic and powerful vocal performance, but lead singer, Shara Worden, didn’t finish her show there. Worden returned to the stage twice, wrapping up the show with The National in an acoustic encore.

“It was really cool that Berninger came out with the other performer,” Devon Early said. “The times when he was up there solo, he looked uncomfortable, but when My Brightest Diamond came out he looked genuinely happy and more comfortable. The acoustic set at the end with her was killer.”

Nevertheless, the band, Berninger in particular, resonated with audience members.

“I love that guy,” senior Nate Hansen said. “I want him to tuck me into bed and sing me to sleep. And pump me up the next morning.”