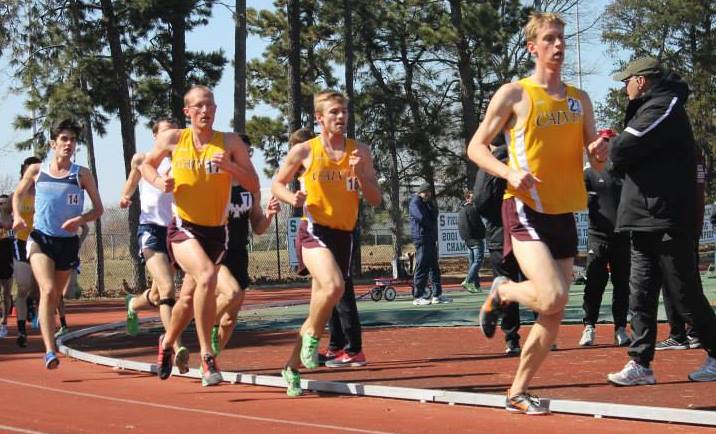 The Calvin College track team saw some impressive performances in the distance events on Saturday at the Michigan State University Spartan Invitational, which saw numerous runners set new personal bests in the 1500 and 5000 meters despite windy conditions.

On the women’s side, senior Nicole Michmerhuizen raced for the first time since her double All-American performance at the national championship meet, placing second (first among college athletes) in the 5000 with a time of 17:06.66. Calvin had three more runners under 18 minutes, with juniors Sarah Danner, Kimby Penning and Kate Ardinger running 17:51.79, 17:53.25 and 17:59.79, respectively. Another junior, Paige McGahan, just missed giving them a fifth with her time of 18:02.13.

Highlighting the men’s performance was sophomore Ethan Anderson placing seventh in the 5000 with a time of 15:04.00, a personal best by more than 15 seconds. Junior Steven Haagsma was ninth in 15:09.40. Calvin had four additional runners (Philip Spitzer, Josh Ferguson, Jeff Meitler and Bret Habura) run under 15:45. In the shorter distances, junior Stephen Tubergen took the win in his heat of the 1500, clocking a personal-best of 4:06.73 while sophomore Andre Otte also had a career best of 4:09.79.

Additionally, senior Hilary Banning was named MIAA Field Athlete of the week after winning the long jump (16 feet 6 inches) and triple jump (34 feet 10 inches) in an 86-68 dual meet win over Hope. This is the second time that Banning has earned this honor in her career.

The Knights’ next contest is at Alma College to partake in the MIAA Jamboree this weekend. In past years, the Jamboree was worth a portion of the MIAA title. However, this year the meet has no bearing on the title race.