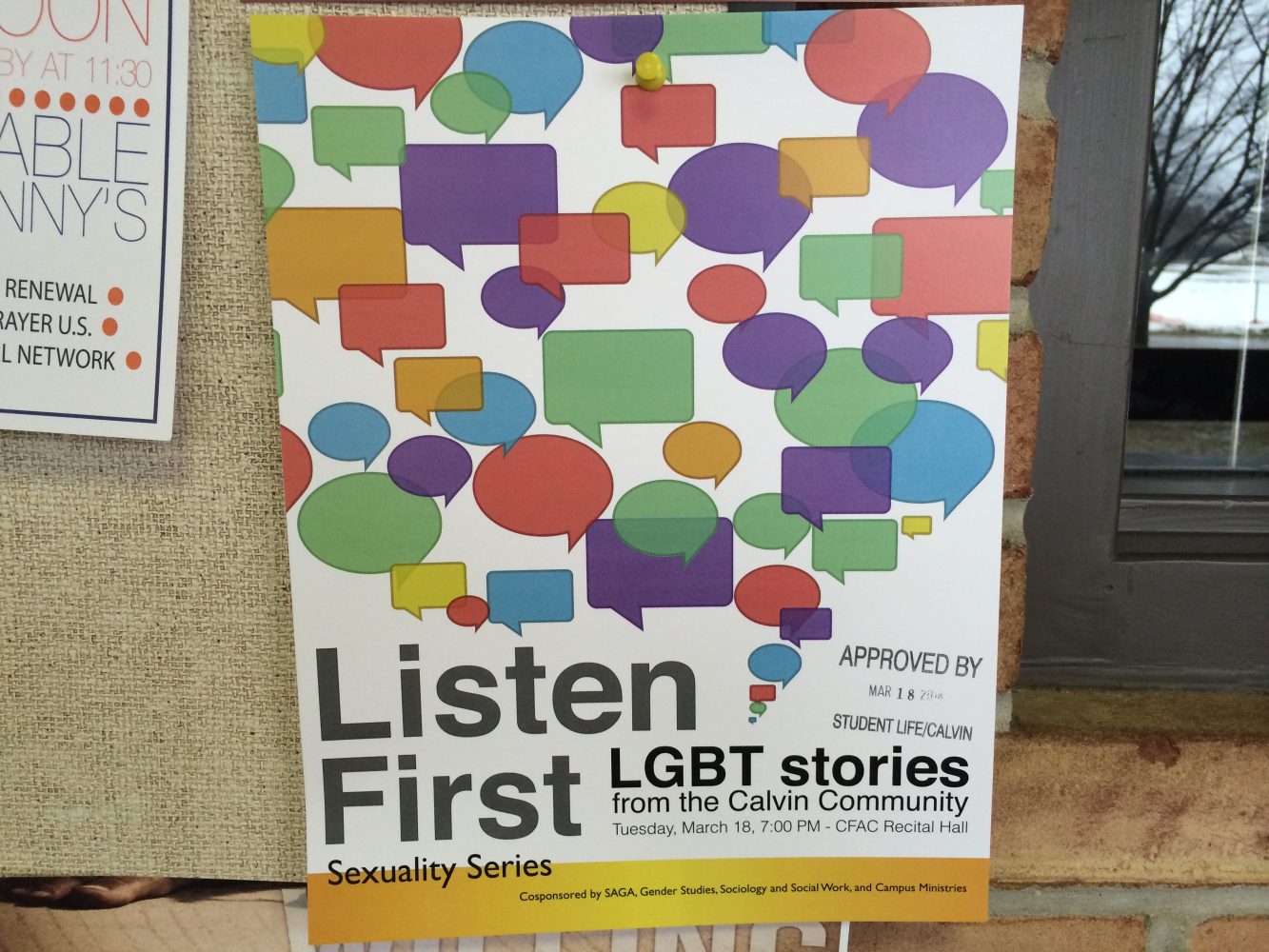 On Tuesday, members of Sexuality And Gender Awareness (SAGA) held their annual LGBT panel in the Recital Hall of the Covenant Fine Arts Center. According to Julia Smith, project coordinator of Student Life, they have had the panel every year since Rev. Jim Lucas started it 20 years ago. The panelists included Lucas, two current Calvin students and a parent of a current Calvin student. Rachel Venema, professor of social work at Calvin, moderated the discussion.

“Calvin cares about the well-being of our students — socially, academically and spiritually,” Smith said. “We hope that, by listening to what these panelists have to say, we can become more like a Christ-like community here on campus. We want to be the kind of listening people, not quick to make judgments. That’s why we call it ‘listen first.’”

At the beginning of the discussion, when the panelists shared their experiences, Lucas commented that the world’s view of LGBT “has changed dramatically” since his time as a student at Calvin.

“Now there’s a lot of affirmation and discussion about this topic,” Lucas commented. “Back when I was a student, nobody talked about this. I became the first Christian Reformed pastor to admit that I was gay.”

The discussion went in a variety of directions, and the panelists answered many questions throughout the evening. Some of these questions included, “What are your thoughts on being celibate,” “what are the common misconceptions of LGBT” and “what advice would you give to someone thinking about coming out?”

At one point in the evening, someone asked if it was possible for an LGBT person to change his or her sexual orientation, claiming that others had been able to do so in the past. Maryanne Zasadil, parent of a current Calvin student, pointed out in response that “being LGBT is not a choice.”

“People who are heterosexual,” Zasadil said to the audience, “did you choose that lifestyle, or is that according to your feelings?”

Lucas also remained skeptical about the claim this question raised about being able to change sexual orientation.

“It’s important that everybody’s part of the conversation,” Lucas said. “If there are stories of people changing orientation, I’d like to hear them.”

For anyone considering coming out, the panelists all agreed that it was important to “find people who you can trust,” listing sources such as SAGA and Pastor Mary.

Lucas remains hopeful that the community will continue to be more accepting of the LGBT community, saying he is “delighted to take part in a refreshing new time in history.”

“There are many churches who welcome gay couples,” Lucas said. “We have over 40 churches in West Michigan who want to be on the list because they want to be known as welcoming. … We are moving at breakneck speed in the way we view this issue. It’s like the issue of slavery — yes, some Christians did approve of slavery — and I think we’re heading in that direction.”