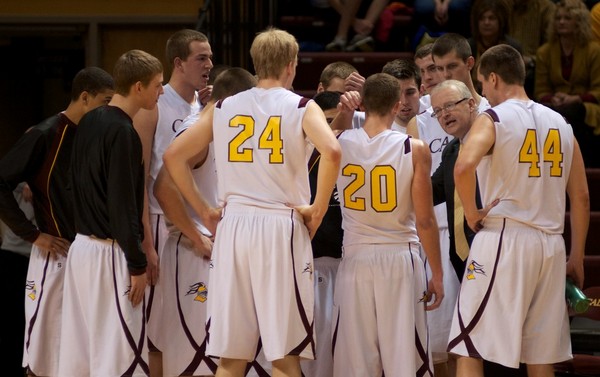 The Calvin College men’s basketball team advanced to the NCAA DIII Sweet 16 sectional last week with wins over Wittenberg and No. 2 Washington University. They will take on Illinois Wesleyan at 8:30 p.m. (EDT) on Friday in Bloomington, Ill.

Last week Thursday, Calvin won their inaugural tournament game handily, 66-51 over 23rd-ranked Wittenberg. Calvin opened up an early lead, going up 37-25 at the half behind Tyler Kruis’ 13 points in the first half of the game. Kruis finished with 19 points and Jordan Brink added 10 as the Knights were able to hold off any comeback attempt from Wittenberg.

Calvin was extremely efficient from the field, shooting 56 percent and holding their opponents under 35 percent. They also forced 18 turnovers.

The Knights followed up this strong performance with an even more impressive one, taking down Washington University in St. Louis, the No. 2 ranked team in the nation, 83-75 on Friday. They were led by a great performance from their backcourt, as Brink, Jordan Daley and Austin Parks combined to score 57 points, with Brink adding 11 rebounds and Parks making four out of his five three-point attempts. Calvin consistently lead by five to nine points over the course of the game.

Calvin forced Washington to play catch-up for the majority of the game and the Bears attempted 30 three-pointers in their near-comeback. Their senior guard Alan Aboona helped them close the gap down to four points with less than a minute left by scoring 26 points, but Calvin finished them off regardless.