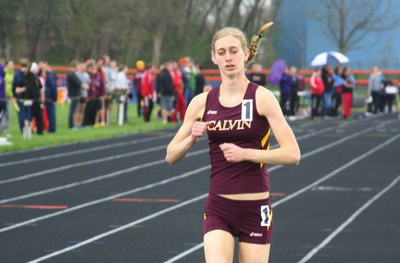 The Calvin College track and field teams are set to host the Calvin Championships on Saturday, Feb. 28. Field events will begin at 9:30 a.m. with running events set to start at noon. Admission is free.

The meet, although not officially an MIAA Championship, is aimed to be as competitive as possible among the schools in the conference. Several of Calvin’s conference rivals, including Hope, are making the trip to compete.

Different incarnations of this meet have been around for the past few years, ever since the league decided not to do an official indoor championship meet. Last year, the event took place at Trine, but coach Bret Otte and the Calvin staff have stepped up to the plate and brought the meet home to the Knights.

The meet will have team scoring, which is a unique thing for a meet this size during an indoor track season. Junior Josh Ferguson said that this is a big motivating factor for the team. “This is our first real opportunity to compete as a team, so it’s definitely exciting.”

For most of the team, this will be their final contest before the spring break trip and outdoor season. The meet serves as a way to gauge how well the team is doing and what they must improve on if they want to defend the men’s and women’s outdoor championship titles from last year.

Calvin does have a couple athletes with a significant chance of competing at the Division III National Championships in two weeks. Senior Nicole Michmerhuizen is seeded fourth in the 3000 meters and sixth in the 5000 meters at the time of press. Senior David VandeBunte is currently 31st on the list in the 3000 meters, and will likely look to qualify in the event next week at a “last chance” meet, likely at either North Central College or Wisconsin-Oshkosh.