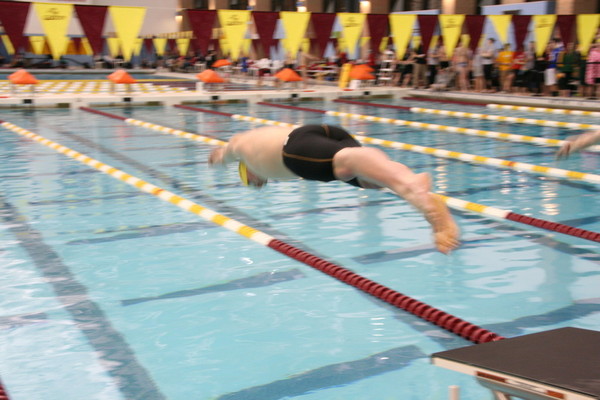 In what was unquestionably the greatest day in Calvin College swimming history, both the men’s and women’s teams took home conference championships on Saturday, culminating a four-day meet.

It was the women’s 10th consecutive title and also held special significance for the men as it was the first championship in school history. The men won with a score of 795, besting second-place Hope’s score of 669; the women registered 895 points, beating Hope by 37.

The Calvin women were led with a dominating performance by sophomore Michaela Rookus, who won the 200 individual medley (IM), 100 breaststroke, 100 freestyle and was a part of two winning relays and two runner-up relays. Rookus was named the MIAA’s most valuable swimmer for her efforts, only the sixth time in school history a Calvin athlete has taken that award home.

The Calvin men had some big performances too, highlighted by four new school records.  Johnson Cochran broke his own school records in the 100 and 200 breaststroke on his way to championships in both events, Aaron Venema set a new mark in his 500 freestyle win and Caleb Meindertsma broke his own record in the 1650 freestyle. Venema also finished second to Meindertsma, and Meindertsma second to Venema, in both their school record-breaking swims. The team also took home three relay titles.

Several athletes from Calvin’s team have achieved “B” standards for qualification for the NCAA Division III Championships. Over the next couple weeks, as final qualifying times are determined, we will see if any Calvin swimmers have advanced to the next level. If not, they will have to live with just a conference championship.