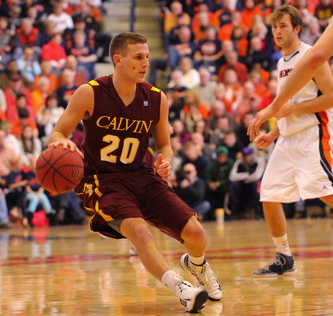 Bryan Powell, an alumnus of the Calvin basketball team, has played against former Hope College basketball players Ty Tanis and Will Bowser many times before. But when the Grand Rapids Cyclones, a new professional team, plays its first game against the Lake Michigan Admirals at the DeltaPlex on Feb. 25, the former rivals will be playing on the same side.

Although he admits to feeling a little competitive with his Hope rivals, Powell is ready to bury the hatchet.

“We’re playing for Grand Rapids now. It’s a bigger purpose [than our rivalry],” he said.

In fact, it was the chance to give something back to Grand Rapids that drew Powell to the Cyclones.

“Instead of going to play [basketball] overseas, it was my dream to be able to play professionally in my own town. Grand Rapids has given me a lot and Calvin has give me a lot, and I want to give something back,” Powell reflected.

Adam Chrisco, the founder and CEO of the Grand Rapids Cyclones, hopes this idea of giving something back to the community will set this team apart.

“We want players who have an interest in helping those in the community. We want them to be big brothers and mentors, so we’re partnering with lots of different for-profit and nonprofit companies that help serve people,” Chrisco said.

Powell is already getting involved with the community. He recently spoke to students at Vanguard Elementary school about the Cyclones.

“I basically told the kids whatever passion there is, go for it. Mine is basketball which is why I chose do this,” Powell said.

Chrisco adds that the players and staff for the Cyclones are making a sacrifice just by joining the team.

“Part of building our program is having players and staff receive less compensation, so they’re here for passion. We’re making our bread and earning our name through action without typical award,” he explained.

Many of the players still work full and part-time jobs, which can make finding time for practice difficult, though Chrisco says they make the most of what time they do have to practice.

“We only get six hours a week to practice usually, so that all has to be efficient, well-used time. That means it’s important to find guys with high character,” he said.

Powell, who majored in media production at Calvin, works for WoodTV8, in addition to playing for the Cyclones. He says he didn’t consider playing basketball professionally much at all until his senior year of college.

“During senior year, reality started to tap on my shoulder,” Powell recalled. “I said to myself, ‘hey, you’re young.’ I thought maybe I’d play professionally for a year or two at least. And it’s the best way, at least now, that I can reach people. With four years at Calvin, my faith had really developed, and I wanted to push that to the youth.”

Chrisco notes that the Cyclones, which are a part of the Premier Basketball League, already have the financial support of the community behind them, even though they have yet to play a game.

“We have 15 sponsors, ranging from some of the biggest companies in the area, like Spectrum Health, to small, local businesses, such as 20/20 Printing,” Chrisco noted.

Chrisco hopes that local basketball fans will be just as supportive as the business community.

“Eventually, we want the Cyclones name to be synonymous with Grand Rapids. [In five years], we hope for a packed house with happy sponsors and a community of people who believe in us,” he said.

While they expect about 1,500 people to come to the first game, Chrisco says they “still need a push from everyone.”

Each area college will have its own cheering section, so Powell particularly encourages Calvin students to come.

“Being a Calvin student for four years and playing on the basketball team, I really need the Calvin support. I’ll never live it down if there’s more Hope representation in the crowd,” he said.

Student tickets to the game cost $5. Those who show up early have the chance to get involved with the games during the halftime show.