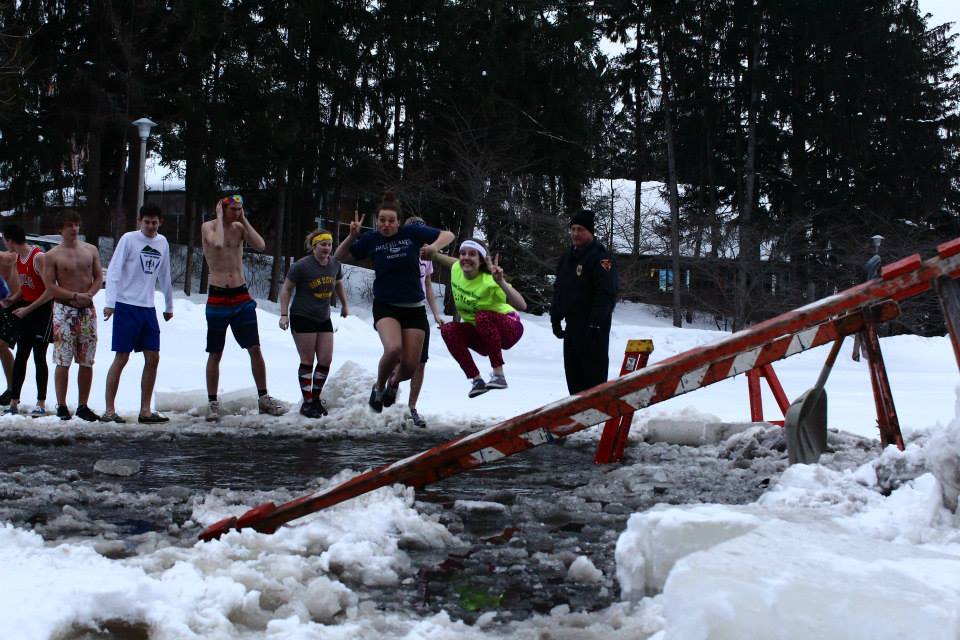 This year, on the 16th anniversary of the Cold Knight plunge, roughly 650 students jumped into the frozen seminary pond, breaking the 2011 record by at least 57.

Senior Corrie Baker, who earned a golden towel for her fourth jump, expressed that she was proud to have jumped all four years. “But honestly,” she said, “I can say I’m glad that I’m never doing that again.”

Among the trembling post-jump bodies scrambling around for clothing, screams of “Never again!” could be heard throughout the front lobby of the seminary.  But this did not deter the freshmen still in line.

Among those waiting to jump were wheelchair-bound Garrett Bazany and his friend, sophomore Nolan Coallier.  Both were there, Coallier said, because “You never feel more alive than when you jump into a freezing pool of water.”

Ultimately, Bazany was unable to jump because prolonged exposure to the cold affected his legs, but he hopes to jump on the make-up day.

The cold this year nearly caused the event to be postponed as a whole.

“The question this year,” said Susan Buist, alumni programs coordinator, “was how cold is too cold.  If you can get frostbite in 15 minutes, we would postpone it.”

She explained that normally a block was cut out of the ice and then pushed underneath to make a hole.  This year over half the depth of the water was frozen, which made carving the hole difficult, but the outside temperature that afternoon remained high enough to allow the jump to continue.

The deep ice caused several scrapes and bruises as students climbed out of the hole. One student dislocated her shoulder and campus safety immediately responded by calling an ambulance.

For most though, the threat of injury was no deterrent.

Sophomore Lydia Koning braved the jump with her floor.  “We’re all really excited and freaking out.  It’s really cool and weird at the same time, but you just have to embrace Michigan weather.”

Senior J’nee John was jumping for the first time for such reasons.

“Freshman year,” said John, “I was like  ‘What!  No way I’m doing that!’  But now it doesn’t seem so crazy because now I’m graduating and it’s my last chance.  I feel like it’s a big part of being a Calvin student.  You have to do it at least once.”

Still others do not feel the reward of the golden towel is worth it.  “I did it once to say I could do it,” said senior Paola Fuentes, “but then I was cured.”

Some take issue with the cold, others with the smell.  “Freshman year I had to shower five times,” said senior Cassie Westrate.

“Now if it was golden robes at the end,” Fuentes chimed in, “I would be all over it.” But otherwise it’s not worth it.

Nevertheless, it’s a tradition that everyone seems to appreciate.

“It’s a neat tradition,” said senior Shannon DeJong, “and I respect the people who do it, but it’s not for me.”