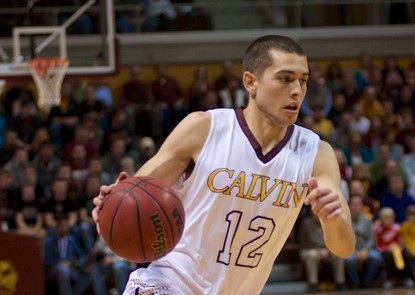 The Calvin College men’s basketball team had a full week, dropping their second consecutive rivalry matchup to Hope 83-65 last Wednesday before rebounding with a 68-55 win over the Adrian Bulldogs on Saturday.

The split week moves the Knights’ record to 16-5 overall and 8-2 in MIAA play, good for second place in the conference.

The Knights traveled to Holland with the hopes of gaining sole possession of the top spot of the MIAA standings, but ended up with a more lopsided loss than their 71-63 defeat at home earlier this year.

Calvin struggled from the start in this matchup, falling behind 35-19 at the half and trailing by as much as 30 in the second half.

The team was again plagued by a poor shooting performance, only shooting 23 percent in the first half and 38 percent overall on the day.

As in the last game, the Dutchmen were able to contrast the Knights’ struggles with an uncharacteristically great day from the field. Hope shot 55 percent on the game and 62 percent from 3-point range in the second half.

Senior Tyler Kruis led Calvin with 21 points, the most of all scorers. Alex Eidson had 17 points and Nate VanArendonk had a double-double with 13 points and 10 rebounds for Hope.

This did not deter the Knights from delivering a strong performance three days later against the Bulldogs of Adrian College. The game was close halfway through, as Calvin only led 34-33 at halftime before pulling away late. They used their size to overwhelm the Bulldogs down low, with a 33-23 rebounding advantage.

Calvin will be back home against Kalamazoo on Feb. 12 before hitting the road to play Trine on Feb. 15. A two-game home stand with games against Olivet and Albion follows the next week.