Begbie on Post-Protestant Stress Disorder: recovering a sense of mystery in worship 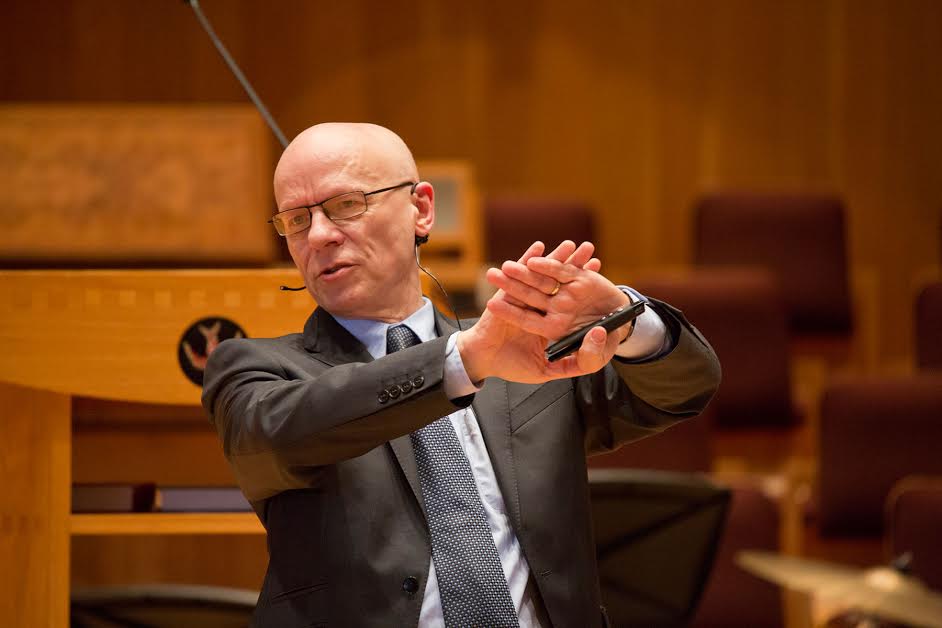 Have you heard of PPSD (Post-Protestant Stress Disorder)? Do you struggle with it? Symptoms might include, but are not limited to, a frustration with long Powerpoint-driven sermons, a belief that the Bible is nearly incomprehensible and an overwhelming sense of despair in the pursuit of truth.

Jeremy Begbie, in a plenary address at this past weekend’s Worship Symposium, (jokingly) introduced the term and used it to account for the church’s reborn fixation on mystery.

Begbie said that many Christians connected to or borrowing from the Protestant tradition (much of western Christianity) have grown frustrated with overly didactic Christian teachings that have left no room for wonder about the fullness of God’s character or about paradox in the Bible.

For example, Begbie said, worship services have often included “the first five minutes of compulsory jolly,” a time where worshippers feign happiness, even if they are struggling with doubt, grief, pain or confusion.

The result of this kind of worship and teaching, Begbie noted, is often a misdirected interest in mystery, a swing from believing that God and God’s word are easily explained in a 20-minute sermon to believing that “God is completely unknowable,” or Scripture is something we cannot “know or speak about.”

“The [new] trend is a love of mystery for its own sake,” Begbie said.

Begbie notes that the message of the gospel, the embodied Jesus Christ, is certainly a mystery in that it is too profound for human discovery or understanding.

Yet, Begbie reminded listeners that the mystery has been revealed by “the saving plan of God, shown and effected in Christ.”

He referenced Colossians 2:2 in saying that Christ is the fulfillment of this mystery. Therefore, Begbie called listeners to center the focus of mystery on its fulfillment in Christ. Having said this, he also called the church to reclaim a healthy sense of mystery.

“[Worship should] make mystery sound interesting rather than a lukewarm bath,” Begbie said.

Begbie said worship, while affirming the truth of Christ, could remind us also of our inability to grasp God, the reality that our best descriptions of God fall short of who God is.

“Words can never imprison the realities we speak about,” Begbie said. “In worship, we must recognize the weirdness of the gospel.”

Yet he countered, “Just because something isn’t adequate doesn’t mean it’s not true.”

One listener raised his hand and asked, “What can leaders in church do differently?” — The ‘so what’ question.

Begbie, a professionally trained musician, talked about the role of music in worship to create a sense of healthy mystery.

“How can the arts make the gospel stranger, odder and yet … deeply attractive?” Begbie asked.

He gave a few small examples: adding musical dissonances that overlap with melodic tones, a song introduction that hovers between two keys, like Downton Abbey’s theme (go ahead, look it up) or incorporating music that dwells in a minor key. He gave listeners a challenge:

“Get one item in a worship service that makes you a bit uncomfortable,” Begbie said.

Begbie said this opens up new ways, beyond simply speaking about mystery, to recover a healthy sense of the profundity and the mystery embodied in Jesus Christ.