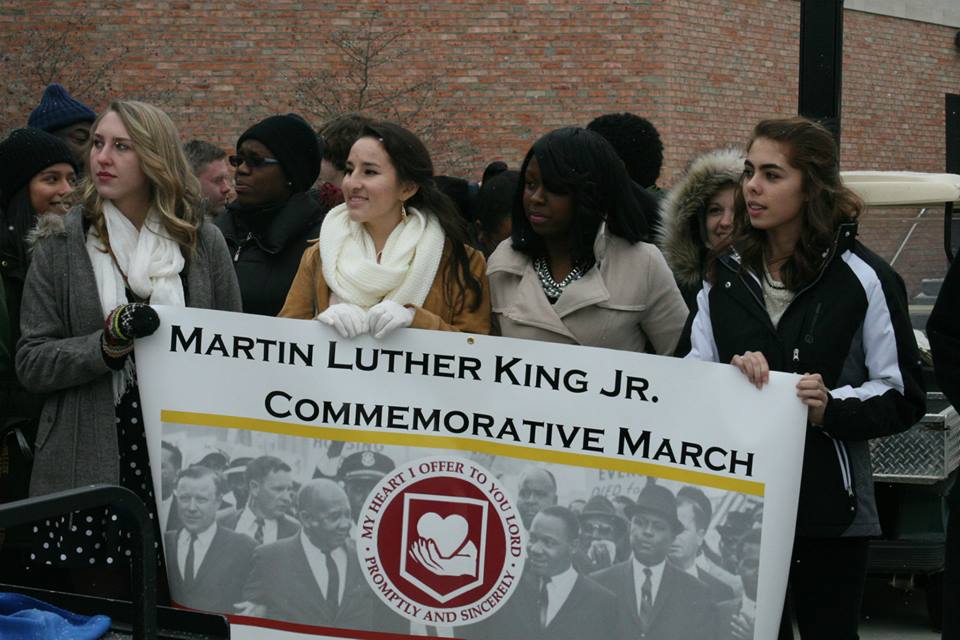 In honor of Martin Luther King Jr. Day, John M. Perkins, one of the foremost evangelicals involved in the civil rights movement and the president of the John M. Perkins Foundation for Reconciliation and Development, gave a talk to the January Series entitled, “Love is the Final Fight: The Life and Legacy of John M. Perkins.”

After the talk, Perkins led a march on Calvin’s campus in which marchers, including President Michael Le Roy and Mayor George Heartwell, meditated on the legacy and teachings of Martin Luther King Jr.

Perkins shared a compelling story of segregation and reconciliation. He left his home in Mississippi at the age of 17 after a marshal killed his brother, only to return 13 years later to evangelize and promote community development in Mississippi. He became closely involved in the civil rights movement in the 1960s, melding his faith with the struggle for civil rights.

After playing a song by alternative-rock band Switchfoot which directly mentions Perkins, Perkins began his talk by explicitly referencing Martin Luther King Jr. He referenced Dr. King’s famous vision for American society periodically, tying King’s vision to “the greatest statement in the history of the world:” the Declaration of Independence’s claim that all humans are created equal.

Perkins balanced an optimistic vision of “the first post-racist group of people that began to come up on the scene in America” with a sense of urgency, arguing that America is at a tipping point.

Between the talk and the march, Living Legends and Rising Pillars — Grand Rapids residents who were involved in the civil rights movement and/or worked for community development in Grand Rapids — were available for conversation.

Jeff Bouman, director of Calvin’s service-learning center, said in a press release that “Dr. Perkins represents well the branch of the civil rights movement that has maintained an integral connection to the church, and for those of us who march along with him on Monday, we remain inspired by the biblical vision of ‘beloved community,’ of anti-racism and of reconciliation.”