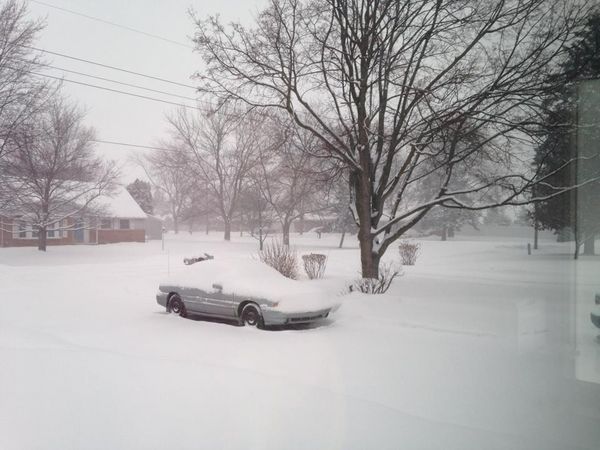 Some call it a polar vortex. Some call it snowpocalypse. Some even call it the revenge of the snow. Whatever you call it, we can agree that the snow and frigid weather made mincemeat of America’s travel plans.

Throughout the country, 3,000 flights were canceled and 9,000 were delayed. Calvin College decided to delay school for a day to give students extra time to get to campus.

Stories of woe and traveling shenanigans are not hard to find. Senior Lauren Cremean is from Buffalo, N.Y., and was stuck there for half a week longer than expected because of travel bans around the city.

Originally, she planned to get to Calvin early, but decided to wait. Eventually, she decided to go through Canada, where the weather was better.

“We checked the maps,” Cremean said. “The weird thing was that all along Lake Erie was this band of snow that we would have had to drive through. So we went through Canada. There was a minimal wait on the border and the roads were fine.”

Cremean made it on time to school.

Junior Steven Mulder was traveling from Bakersfield, Calif. to Grand Rapids, Mich. by way of Denver.

“I went to the airport to talk to the teller,” Mulder said. “And there wasn’t a flight until Friday. That’s a five-day delay. I checked LAX (Los Angeles International Airport), San Francisco, Fresno, all of the airports. There were no flights that were able to get me from California to Michigan.”

However, Mulder wasn’t too flustered over the delay.

“It wasn’t too bad,” Mulder said. “It just extended my vacation. California was seventy degrees all break and I was in shorts. At least I didn’t get stuck in an airport.”

Senior Leah Jonker was in a wedding in North Carolina and had to fly through Baltimore to get to Grand Rapids.

“I ended up sitting in the airport for about six and a half hours,” Jonker said. “It was chaotic. There were people running around, people hollering on their phones. A lady started bawling on the phone in front of me.”

However, when she got to Baltimore, her flight to Grand Rapids was on its way.

“My mom texted me and said, ‘your flight already left,’” Jonker said. “I ran to my gate, and the lady at the gate said they just closed the doors. If I had been there five minutes earlier, I could have made it. I was able to get the next flight to Grand Rapids, which was the next day. It was the last seat, so I was pretty fortunate.”

Even her drive from the Grand Rapids airport was fraught with peril.

“The ride that I had scheduled couldn’t make it,” Jonker said. “So I had to call another friend to pick me up. We were driving to her house and we almost spun out of control and hit a snow bank. But we made it, and I’m alive.”