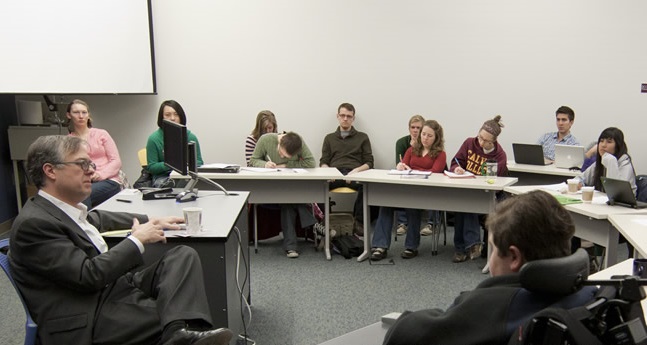 Calvin College is mulling over the addition of master’s programs to urban studies and to business in order to attract new students and bring in additional revenue.

However, the push for master’s programs would not come without controversy.

Although an early draft of the strategic plan stated that Calvin would have two master’s programs by 2017, a revised draft removed that time frame. Beversluis said that Calvin was not going to rush into anything.

“I think there’s a sense that these things need to be high quality, and that we’re not going to rush into them. And they also have to fit with our mission … There has to be something that a Christian perspective offers. Why would you want to study this from the lens of a Reformed perspective? You really have to have a good answer for that.”

Beversluis said one of the main purposes of adding master’s programs would be to appeal to a new student audience.

“Calvin does well and puts a lot of stock into the traditionally-aged college student,” Beversluis said. “But are there ways we could diversify our student audience and diversify what we offer to the world at large?”

Beversluis said that, along with thoughts about graduate programs in business and urban studies, Calvin is having conversations with Calvin Theological Seminary to combine resources for graduate programs.

She said another area of interest would be an expansion to TESOL (Teachers of English to Speakers of Other Languages). But she said there are many opportunities.

“People get a little bit of a bug about it and say, ‘oh we could do that.’” Beversluis said. “You could think of a lot of different possibilities.”

However, increased revenue is also a part of the conversation.

“We would not start something just for revenue,” Beversluis said. “But we wouldn’t start it without the potential of bringing in something to the college.”

“What makes speech pathology so successful is that it’s very high-quality,” Beversluis said. “It fits with the mission [of Calvin] and it leads to a fairly assured career path. Those three things are essential to the kind of master’s programs we would have here.”

Beversluis said that a graduate program would be the next step for Calvin because it would help Calvin continue to be a leader in academia.

Calvin’s traditional stance has been to provide an undergraduate education and then send students to other institutions to get their master’s degree (except for speech pathology and education).

However, Beversluis said that the job market is changing.

“But as master’s degrees are more necessary for a lot of jobs, the kinds of professional master’s degrees have exploded. We ask sometimes, ‘Are we doing all we can to prepare the traditional students and a potential new group of students for the kind of activist lives that we want for them?’”