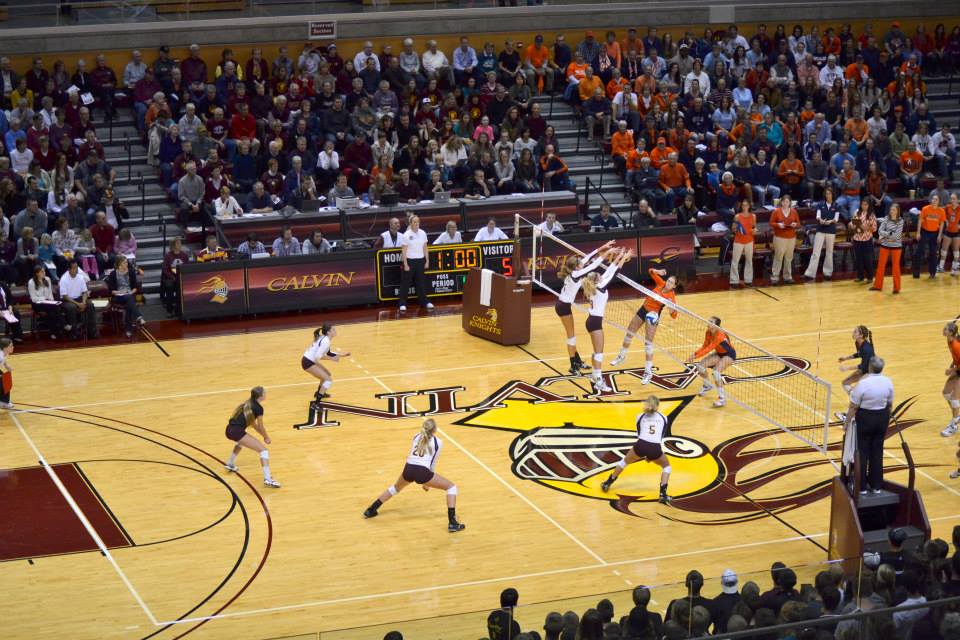 With the win, Calvin clinches an automatic spot in the NCAA tournament. Hope is expected to gain an at-large bid for the tournament.

The first set was close, as neither team had more than a three-point lead until the closing points.  Hope was up 5-2 early; Calvin fought back to go up 10-7, but was unable to sustain much momentum and didn’t register a block for the entire set.

Hope pulled away and won the set 25-20. The Dutch were unable to close out the second set, though, despite winning five points in a row early in the set to go up 9-6. Calvin tied the set at 17 and fought off a push by Hope to take the set 25-22.

Hope’s block proved to be too much for the Knights to handle in the third set, as they hit only .176, their worst percentage of the match.  They were up early, taking a 12-8 lead that forced a Hope timeout, but the Dutch went on a 17-8 run after that and took the third 25-20 as well.

But with their backs against the wall, the Knights dominated the fourth set from the start, at one point going up 17-6 and forcing Hope to use its last timeout.  The Dutch looked like they may have gained some momentum back after a close call went their way, but Calvin held them off 25-15.

The deciding set did not disappoint in terms of excitement. Hope charged out of the gates with a block and two aces to go up 3-0, and Calvin took a timeout with Hope up 5-1.  Calvin broke the run to make it 7-2, and then proceeded to score 7 points in a row with sophomore Maggie Kamp serving.

The Dutch did finally break the serve, but the disadvantage proved to be too much.  Calvin sealed it with an ace by freshman Laura Danhoff and a kill by Kamp.

Hope had some stat-sheet stars too: sophomore Lauren Hazekamp had a sterling 46 assists and 17 digs, and junior Jenna Grasmeyer tallied 25 kills.

After the match, Calvin swept the three major MIAA awards, as Rietema was named most valuable player, Zietse defensive player of the year and Danhoff freshman of the year.

“It’s a big honor, but individual honors don’t really matter in comparison to the team winning. It’s humbling, but we’d rather have the wins,” said Rietema about being named MVP.

Coach Amber Warners was proud of her players’ effort when they were down.

“I’m proud of their fight,” she said.  “We gave up a run and came back even though we’re still relatively inexperienced with that.  I could see it in their eyes that they weren’t done.”

“It was a really tough match, but we never thought we were gonna lose, not even in the fifth set,” Kamp added.

Calvin has a decent chance to host the tournament now that they will presumably be the No. 1 seed.

“It could be very helpful to host, but we can’t control who we’re going to face, so we have to just play our game and take it a match at a time.  If not, we could be the ones going home,” Kamp said.