Catholics at Calvin have not noticed growth in numbers 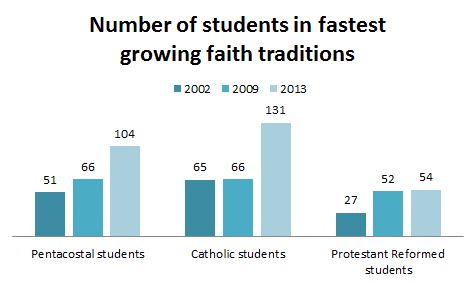 Sophomore Peter Cahill, known to his friends as “Sunshine,” grew up going to Catholic mass in Guatemala. He was attracted to Calvin because of family ties to the school and the art program, not necessarily for the Christian Reformed faith, so he is glad to have found a tiny Catholic community here.

“I happened to find another Catholic through Spanish conversation group,” said Cahill. “Now there are about four or five of us who go to mass every week. We joke about being the only ones here.”

Senior Cate Dreska and sophomore Roni Schultz, who also came to Calvin for reasons unrelated to their Catholic faith, agree that their perception of the number of Catholics at Calvin is small.

“I’ve met a few [Catholic] people in classes,” Schultz said. She explained, however, that she attends Encounter Church because that is where her friends go.

“CRC [students] go to church together on Sunday, but I never found that [with Catholics],” said Dreska, who goes to mass with her brother. “It would be great if [someone] could get us all together.”

Neither Cahill nor Dreska think the rise in Catholics has affected non-Catholic student’s understanding of Catholicism.

“Sitting in the dining hall, a couple friends were talking about how Catholics aren’t Christians. I wanted to listen to their views, so I didn’t tell them I was Catholic. Then I asked if they consider me Christian,” Cahill explained.

He said the students then readily agreed that they perceived him as a Christian, and he explained to them that they may have a misconception of Catholics.

“When people find out you’re Catholic, it ends the conversation,” Dreska said. “They aren’t interested in actually knowing my faith. They already have their thoughts about Catholics. Conversation is more like defending yourself more than explaining. For me personally it’s not worth the arguments.”

Schultz and Dreska said their transitions freshman year into the classrooms were also not smooth.

“Everyone just assumes you’re CRC,” said Schultz. “Even in DCM [it] was hard. They talk about the CRC without describing what it was.”

“I wasn’t raised that way, so I am uninformed. It almost gave me a disadvantage,” Dreska said. “A lot of times they expect you to know the CRC tradition. I had no idea who John Calvin was.”

Yet Cahill found his background did not prevent him from smoothly transitioning, especially with the help of Prelude, now known as First Year Seminar.

“Prelude didn’t seem to assume you know CRC terminology,” Cahill said, who came with a bit of previous knowledge of the CRC. “Through Prelude I picked up the CRC jargon. I never felt at a disadvantage because of it. It helped that there were several others in my group who were not CRC either.”