How to make a half-court shot 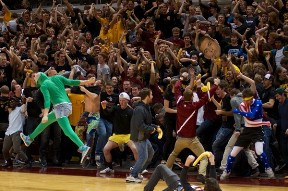 Last year, the Calvin sports community was treated to a very memorable moment when then-junior Brendan Coallier hit nothing but net on a half-court shot at MidKnight Madness, winning himself $500 and a year’s worth of free textbooks. This prize is no joke. I’m sure that, among those who sat in the bleachers and went crazy, there were a few whose cheers masked their jealousy (or maybe it was just me). A remedy is clear: learn to make a half-court shot yourself. Impress all your friends. Win stuff. By following these simple rules, you will be the one inciting the cheers and garnering the free books that you’ll never read.

Be likeable: You’re about to do something extremely likeable — don’t confuse the crowd by being unlikeable.  You must be someone people want to win the prize, otherwise sinking the shot will not be satisfying. So blow your nose, wash your hands after you use the bathroom, dress nicely in class, call your mother and get a job. If your laugh is annoying, don’t laugh. Soon enough, you’ll be the physical embodiment of everything Calvin College should be. Then, and only then, are you ready to make a half-court shot.

Get momentum going: The audience will see your shot as acceptable as long as you don’t airball it short. Do anything but that. You are a college student and should be capable of propelling a basketball 47 feet if you get enough momentum going; it is imperative that you do so. But, if this proves fruitless even after years and years in the weight room, it may be time to give up on your dream.

But don’t push the ball with two hands: Coallier nailed his shot by controlling the ball’s trajectory and keeping it from going too far to the left or right. This is done by holding the ball steady with your non-dominant hand and shooting entirely with your dominant one. There are a wide variety of distances from which you can shoot and still have the shot go in, but there is little to no room for error in terms of the shot’s sideline-to-sideline orientation. Therefore, this is the most important thing to practice. If you’re propelling the ball with both hands at once, chances are you have no idea where it’s going.

Be really lucky: Unfortunately, there’s always going to be an element of chance here, so evoke the power of karma. Fail at absolutely everything else in life, be as unlucky as possible and generally make yourself the most miserable human being on the planet. Clearly, this will cause you to be rewarded at some point, and what better time than sinking a half-court shot in front of your entire school? Get Daft Punk’s help too and stay up all night!  You’ve come too far to give up who you are!  (I’m sorry).