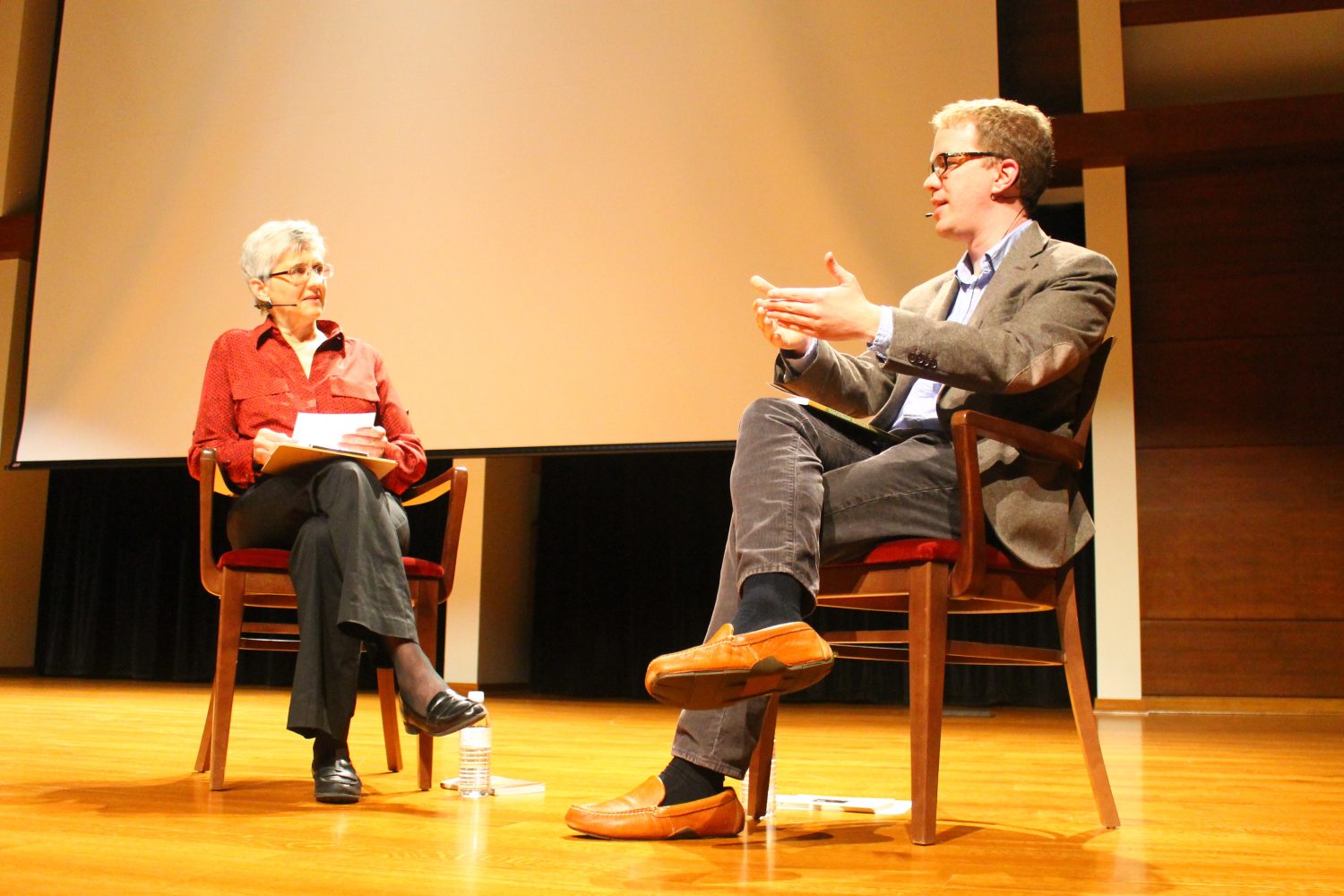 Wesley Hill’s lecture Tuesday afternoon demonstrated that the veil that has long prevented sexual minorities from engaging openly in the church has finally begun to tear. It is no longer enough for Christians to hide behind a stance on homosexuality without participating in the questions that exist as a result.

Hill, assistant professor of New Testament at the Trinity School for Ministry, spoke carefully and candidly about these questions in his lecture “Between Presumption and Despair: Practicing the Virtue of Hope as a Celibate Gay Christian” in the Covenant Fine Arts Center Recital Hall.

An openly gay and celibate Christian, Hill used personal experience and biblical evidence to explore the question of “what it looks like for Christian sexual minorities to experience the hope that the gospel offers.”

“My story doesn’t allow me to locate my hope in either of those options,” Hill said. “Instead, what I found is that the hope God was calling me to in the gospel was hope that came in the form of a positive call to love, precisely in my celibacy.”

Sponsored by Sexuality and Gender Awareness (SAGA), the Broene Counseling Center, the Gender Studies department and various other departments and student organizations, Hill’s talk was a continuation of the discussions taking place in this fall’s sexuality series.

“Calvin College has a stated position, the position of the Christian Reformed Church, which says there is no shame in being oriented toward people of the same gender, but it would see a sexual relationship as being outside of what scripture allows,” Julia Smith, director of the sexuality series, said in an interview before Hill’s presentation. “And that causes people, rightly, to say, ‘OK, how does this look? This sounds like it could mean a life of loneliness and a very depressing prospect,’ and Wesley speaks to those kinds of questions.”

After growing up in a “sheltered environment” where he had little to no exposure to homosexuality, Hill realized in college that ignoring his homosexuality was not the path toward redemption.

Smith explained how the purpose of the sexuality series is to delve into these questions of faith and to gain richer perspective on issues of sexuality so that Calvin may create a welcoming environment for all of its students.

Shirley Hoogstra, vice president of student life, agreed that these conversations are vital to creating a safe and healthy learning atmosphere.

“I think in order to love people well you need to be able to understand the context out of which people live and learn,” Hoogstra said. “So the more we can find out for our LGBT students, what their context is for living and learning, the better the environment will be.”

Hill explained that his own context has led him to a hope revolving around a vocation that encourages fellowship among Christians — the vocation of spiritual friendship.

“Identity labels can be helpful in naming the specifics of our stories and to talk about the ways in which my questions look different from your questions,” Hill explained, “but insofar as those labels divide us and prevent us from recognizing a more profound solidarity in light of the gospel, I think perhaps our call is to hold those identities loosely, and find our solidarity in the shared hope of the gospel.”

Hill views this idea of spiritual friendship not only as a call to sexual minorities, but also as a vocation for Christians in general, which allows more room for those who feel called toward celibacy.

Smith agreed that a stronger focus on this kind of friendship could help create a place of belonging for people who do not see marriage as the “end-all, be-all” of Christian living.

“Regaining a theology like Hill’s around spiritual friendship shifts the balance somewhat away from the idea that romance and sex is what you need in order to be a fulfilled person,” Smith said.

“I appreciated that as a homosexual Christian and a biblical scholar he can make these arguments about celibacy because in a lot of ways it’s an uncomfortable argument to make as a heterosexual Christian,” Van Zanen said. “He offered a way to see that as hopeful instead of just limiting, and that makes it a little bit less patronizing to hold that view and talk about it.”

Smith hopes that next week’s speaker, Justin Lee, founder and executive director of The Gay Christian Network, will allow for additional discussion surrounding these questions of homosexuality in the church.

To further engage students in this conversation regarding homosexuality, celibacy and the church, the sexuality series is sponsoring book groups that will study both Hill’s book, “Washed and Waiting: Reflections on Christian Faithfulness and Homosexuality,” and Lee’s book, “Torn: Rescuing the Gospel from the Gays-vs.-Christians Debate.”

Hoogstra said through lectures and discussion groups like these, she hopes listeners will be equipped to be better church members and improve the way in which the church responds to those with stories that are not mainstream, i.e. heterosexual and looking to be married.