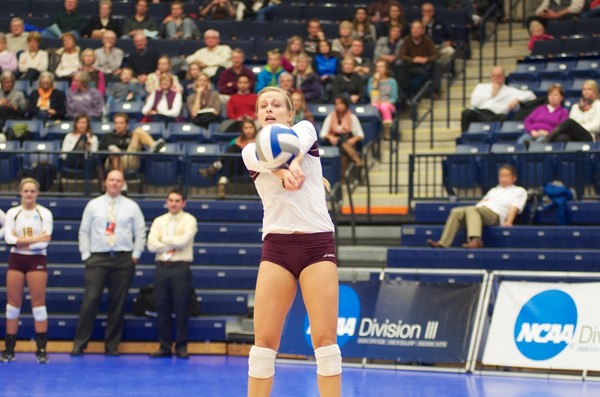 The Calvin women’s volleyball team kept its record perfect this week, surviving a down-to-the-wire four-set match against Albion on Friday and downing Alma in three sets on Saturday.

These wins improved the top-ranked Knights’ record to 18-0 with a 10-0 MIAA contest record.

The Knights were fast out of the gate against Albion, winning the first two sets easily, 25-9 and 25-13.

The next two sets proved more of a challenge, as Calvin lost their first set in an MIAA game all year, 22-25.

The Knights won the match with a close fourth set, 26-24. Sophomore Maggie Kamp was clutch for Calvin as she recorded eight kills in the deciding final set for a total of 18 on the match.

Kamp again led the Knights with 12 kills, with senior Emily Crowe right behind, recording 11 kills off a .714 hitting percentage. Rietema and Zietse again paced the Knights with their assist and dig totals of 33 and 20, respectively.

Calvin will look to extend its record MIAA winning streak with a game against Olivet on Wednesday, Oct. 9.

The team’s attention will then be turned to the Midwest Tournament they will host on Oct. 11 and 12, which will bring the University of Chicago, Wittenberg University, Elmhurst College and Mount Union College to the Spoelhof Center to square off against the No. 1 Knights.