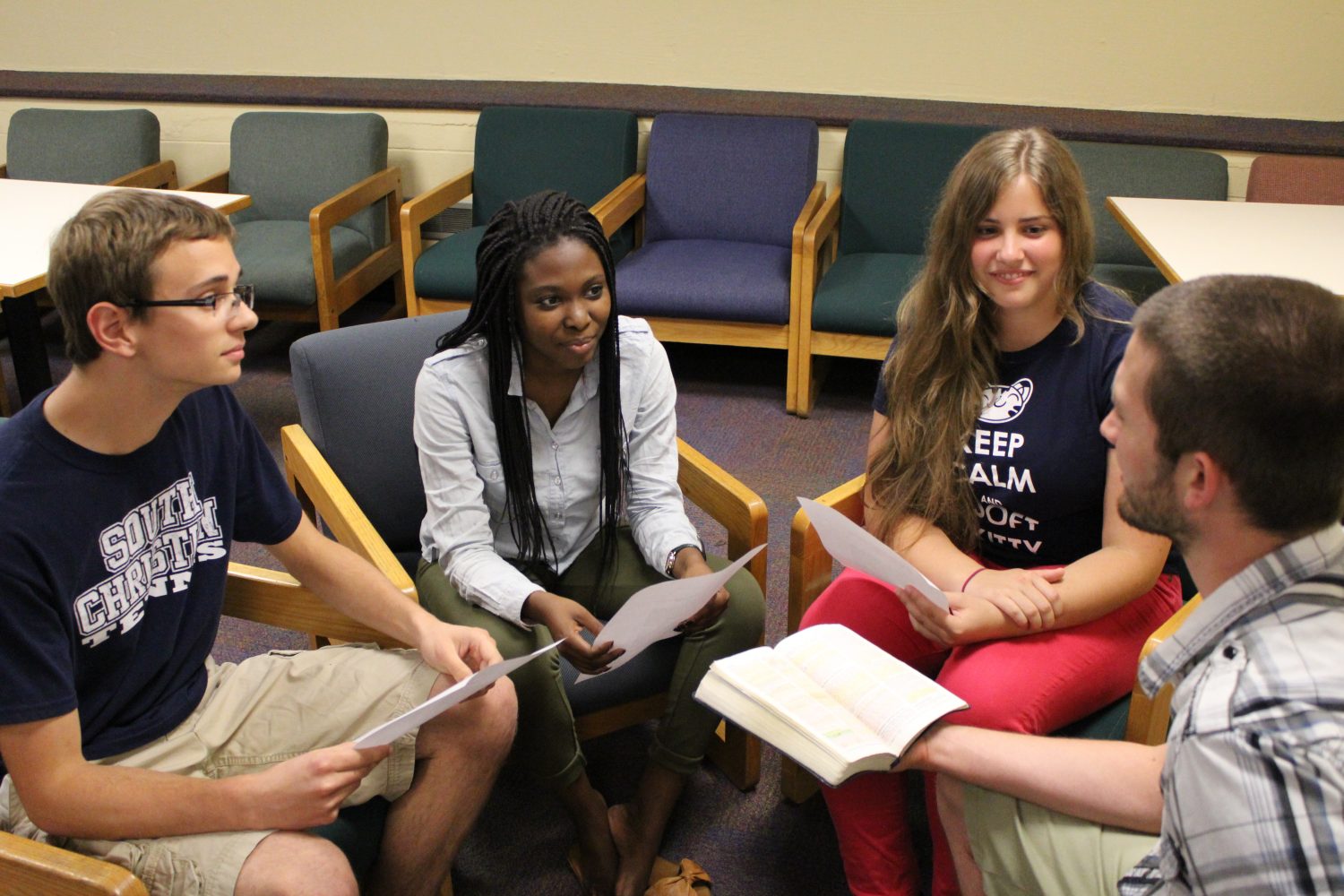 Jared Votaw, resident director (RD) at Boer-Bennink, held his first prayer session of the semester Tuesday night, a program he began to equip the prayer lives of Calvin students.

Twenty-two students attended the event, scheduled to meet Tuesdays at 8 p.m. in the Bennink basement. Votaw taught on John 15, explaining what it means to abide prayerfully in Christ. He also led students in developing a plan to carefully cultivate their prayer lives. During the session, students had the opportunity to pray with and for each other, in order to practice what they were taught.

Votaw, who has been an RD in Boer-Bennink for three years, first implemented his idea for a time of prayer and teaching in the spring semester of 2012. In past prayer sessions, Votaw has taught on praying through confession, fasting and forgiveness and students have gone on prayer walks and have prayed for spiritual healing.

Senior Kendra Kosirog, who attended most of the prayer sessions last year, talked about why she began attending.

“Every night is something interesting, rarely talked about in church,” said Kosirog.

Votaw stressed the central vision he had for the program.

“My first and foremost reason for doing this is to grow an intimate desire for Christ in students,” Votaw said. “I think that’s my heart.”

Votaw also hopes that students will be more effectively equipped to see God’s kingdom, to see when God “nudges them to reach out to someone” or to pray for a specific person. He also said part of seeing the kingdom of God is recognizing answered prayers.

Votaw stressed the need for students to develop intimacy with God.

“A lot [of students] generally don’t spend time with God or cultivate a relationship with him,” Votaw said. “And after all, prayer is simply talking with God.” The evenings of teaching and prayer help students begin to see the presence of God that is “made known when we start looking for it.”

But Votaw said that seeing the presence of God is only the byproduct of growing closer to Christ, the main focus of the meetings.

“We come to dig into the Bible,” Kosirog said.

She praised Votaw for his dedication to the teachings.

“He spends a lot of time in prayer before each meeting,” Kosirog said. “Jared is a man of integrity.”

Votaw makes sure that every voice at the prayer session matters. He welcomes different opinions at each meeting, in order to try to make the sessions a “spiritually safe place.”

Each session Votaw teaches for a half hour and then has the students break into small groups to apply the teaching through prayer.

Students say they have witnessed emotional and spiritual healing at the sessions.

Sophomore Maleah Walters said last year her shoulder was miraculously healed during one of the prayer sessions. On that night Votaw taught about healing prayer and after the teaching, Walters reluctantly allowed two students to pray over her injured shoulder.

“As they prayed the muscles in my shoulder felt like they went from warm to cold and warm to cold — it was a sensation unlike I’ve ever felt before,” Walters said.

After the prayer, she found she could move her arm in any direction without pain, impossible before.

“God had used these guys to minister to me and demonstrate his power. How cool is that?” Walters said.

Votaw said many students are surprised by the ways they begin to encounter God. He said some students find it hard to believe prayer can be enjoyable or is a practice that can be cultivated.

“I think an hour of prayer a day is possible for anyone,” Votaw said. “The kingdom of God is advanced through prayer. We see how the New Testament becomes a normal part of our lives.”

The group will meet Tuesday, Sept. 24 at 8 p.m. Votaw will be teaching on what it means to wait on God.