Soccer and volleyball to raise money for malaria nets 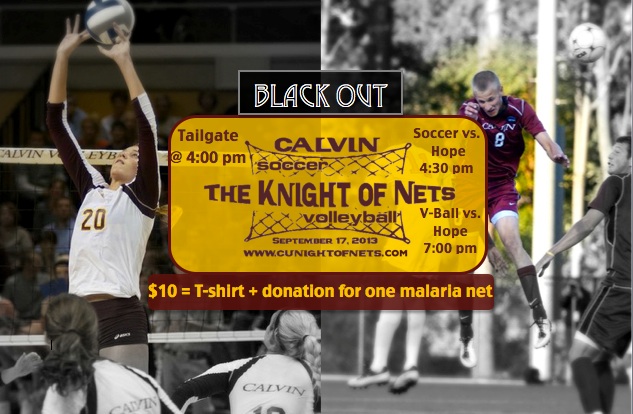 A collegiate soccer star at Wheaton College who had even spent some time playing professionally, Souders had never really needed any extra motivation to get the most out of himself on the pitch.

But when he took some time to take a trip to impoverished areas Africa with Team World Vision, an internationally-recognized committee for social justice, he began looking for ways to integrate his love for soccer and a vision for social change.

“The trip changed my life in the best and worst way possible,” commented Souders, who is now in his second year as the head men’s soccer coach at Calvin College.

After a lot of hard work by multiple people and schools, a part of this vision is coming to Calvin College today.

The event, which has been dubbed “The Knight of Nets,” has a simple yet effective concept, focusing for a game not on the nets present in sports, but on the mosquito nets that can save lives in Africa by helping prevent malaria.

Every spectator that pays $10 at the Calvin-Hope men’s soccer or women’s volleyball games today will get a T-shirt and a barbecue dinner, but more importantly, $6 of that money will buy one mosquito net to be sent over to a third-world country.

Souders saw an opportunity today, where both volleyball and soccer played Hope at home.

“I thought, ‘it would be awesome if people could see Calvin and Hope as more than just two schools that are big rivals,’” said Souders.

Thankfully both the women’s volleyball teams at Calvin and Hope were more than happy to put their efforts into The Knights of Nets.

“It will be very exciting to partner with Hope for a greater cause than a sporting event,” said volleyball coach Amber Warners.  “We just want to see how many nets we can sell.”

Souders also hopes this event is more than just a one-time thing, but his focus remains on making the inaugural run-through a success.  “This is something we want to do every year; right now we’re just working on getting the word out and getting as much initiative as possible.”

There’s still the possibility of a winter or spring sport doing a similar event, but a lot of that will depend on how successful The Knights of Nets is today.

Both Warners and Souders insist that despite the game being for a greater cause, there will be no lost competition on the field and court.  The Hope game is an extremely important one for both squads.

The Calvin men’s soccer soccer team is looking to start the MIAA season with a win after playing a rugged schedule in its first three games and losing all three.  The Hope team is again top shelf, as the Flying Dutchmen just debuted in the national rankings at No. 22.

The Calvin volleyball team is ranked No. 1 in the nation and will take on its toughest MIAA opponent, the No. 5 Flying Dutch.  The competition in both contests will be intense, and Calvin sports fans can rest assured that the games would be worth ten dollars even without the humanitarian benefits.

“We’re two teams that always seem to bring out the best in each other,” said Warners.

Souders agreed, saying “this year will be another battle. We’ve had a tough schedule and we’ll have to prove ourselves against a really tough Hope team.  But if we play well we have a chance to win.”

The soccer game starts at 4:30 p.m. at Calvin’s soccer field, with the pre-game tailgate beginning at 3:45 p.m. The tailgate will continue until 6:30 p.m. with the volleyball match slated to start at 7 p.m. inside Van Noord Arena.

There will be a competition between Calvin and Hope fans regarding who can purchase more nets, so fans are cordially invited to this great night of sports and social change.