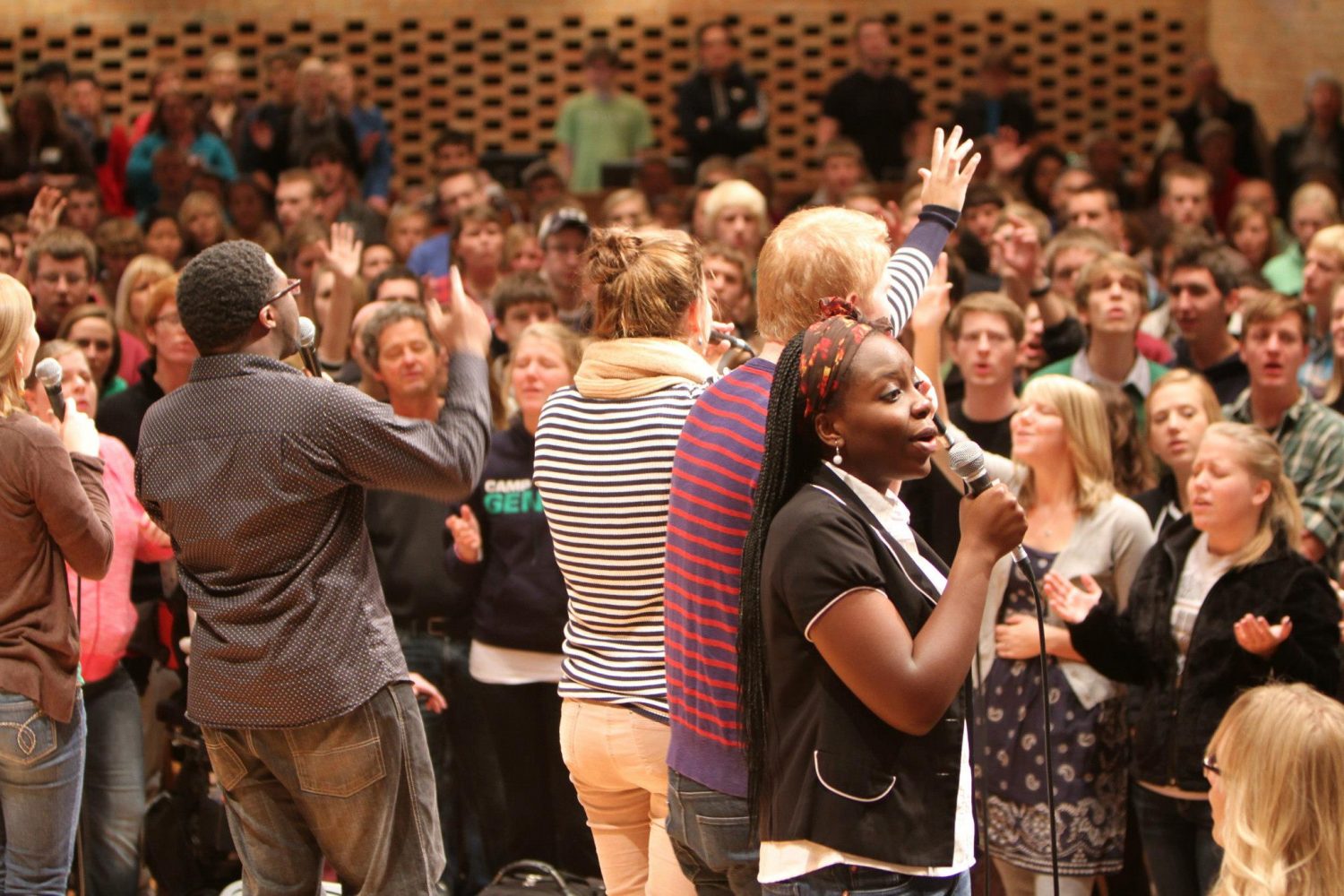 For many years, the song “My Friends, May You Grow in Grace” has ended every Living Our Faith Together (LOFT) service, but this is about to change after Paul Ryan, associate chaplain for worship, announced on Sunday night that the song tradition would be discontinued.

Ryan noted that the song “isn’t our song anymore,” since it has now spread across the country, and that some students were getting tired of it.

The song has been used for closing nearly every LOFT service for 15 years and has a deep tradition and importance among students and the Calvin worship teams alike, Ryan said.

As evident from the audible gasps in the audience when Ryan made the announcement, some students are disappointed that LOFT is getting rid of the tradition.

“I think it’s getting rid of an element of the community that was really beautiful,” said Nicole Schmidt, a senior who attends LOFT regularly.

“I’m very upset to see it go,” said Elena Buis, a LOFT attendee and former worship apprentice. “I guess if you’re from GRCHS, you might hate it, I don’t know. I’m cool with a new song, I just want the same sentiment to be there.

“What I love so much about it is that we would end worship by holding hands and singing. The best part is when we would lift our hands and the piano would drop out. This is what Calvin is about. We’re singing as a community and giving God the glory.”

Senior Katie Vogel, a regular attendee of LOFT, is confident that campus ministries will make the right decisions.

“As a senior I have seen a lot of changes through campus ministries,” Vogel said. “I have every confidence in the campus ministries staff and the Holy Spirit leading us all through this worship process.”

Though the song used to be one sung primarily at LOFT, it has gained increased popularity and is now sung at high schools, church camps and Cornerstone University. Consequently, a good deal of students were responding to “My Friends, May You Grow in Grace” in an “Oh, it’s THAT song” attitude or, as Ryan puts it, “like, that’s so high school.”

This isn’t the first time LOFT leadership has tried to switch out “My Friends.”

Ron Rienstra, Ryan’s predecessor, decided around 2001 that LOFT would try a different song, “Marching in the Light of God,” at the end of services, instead of “My Friends, May You Grow in Grace.”

Rienstra reportedly told students to “Go out into the light of God’s grace!” However, the students stood still, expecting the service to end with the traditional song. One of the students in attendance shouted, “play the song!” (referring to “My Friends, May You Grow in Grace”).

Ryan asserts that the song is still really meaningful to him and students.

Dispelling rumors that “My Friends, May You Grow in Grace” is a song originally written by a Calvin student or alumnus, Ryan said that the song was written by a composer before LOFT began using it.

However, it was a song that Gregg DeMey adapted for LOFT usage and first introduced the song in a LOFT service. DeMey was the worship leader and one of two seminary students that started LOFT in the 1990s. The then-chaplain, Dale Cooper, invited DeMey to bring the service, and the song, to campus in 1997.

Prospects for a replacement song to close LOFT services are uncertain, and Ryan is unsure if there will be just one set song. He wants to try out some new songs, maybe four or five a month, and is considering playing “My Friends, May You Grow in Grace” a couple of times next semester.

Some favorite picks to replace the traditional son include “In This Dry Land,” a Korean hymn that Ryan says is “a very beautiful and simple song” that he plans on playing again this Sunday. Another pick is the song that was played this past Sunday, a blessing song from “A Common Prayer for Ordinary Radicals,” while another option is a Chinese blessing song.

For now, Ryan says that he’ll keep experimenting and trying out new songs.

This article has been corrected.