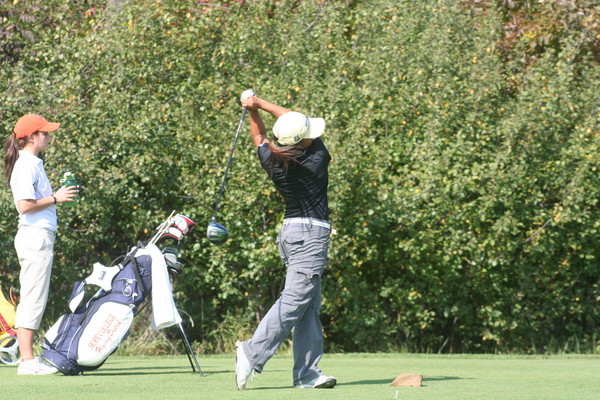 The Calvin women’s golf team placed 13th out of 18 teams at this weekend’s Olivet Invitational, behind the strong performance of senior Carlia Canto.

“We are a young team, but this score did not reflect what we are capable of,” she said. “We are a hard-working, talented group of players, and this tournament will set the tone for us to work harder and hold each other accountable.”

Canto shot a 76 over the tournament’s first day, which had her in first place as an individual going into Saturday’s action.

There were some bright spots of improvement on the second day, as Harkema lowered her score to 86 to finish with 186 for the tournament.

However, the team shot a 364 on the second day to finish in 13th place, and Canto slipped to an 87 to finish with 163 and dropped down to 12th place as an individual, a performance that left her disappointed.

“My regulation shots and putting helped me a lot on the first day, but my mental performance on the second day wasn’t as sharp as it should’ve been,” said Canto.

Next on the schedule for Canto and the Knights is the North Central College Invitational on Sept. 10. They will later take on rival Hope on Sept. 21.