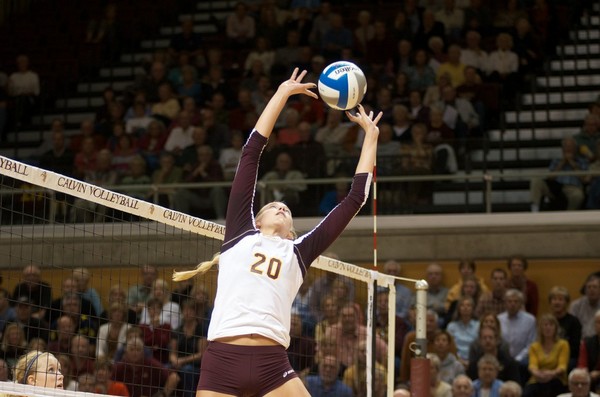 Even after having lost some key seniors from last year, the Calvin women’s volleyball team proved that they were still dominant this year, winning all four games they played, including three against nationally-ranked teams, at the Puget Sound Premier Invitational in Washington.

The first match the Knights played was Friday afternoon against No. 15 Wartburg College. After dropping the first set, Calvin won three sets in a row to finish with a 17-25, 25-11, 25-15, 25-20 victory. A balanced attack was key, senior Megan Rietema leading the way with 12 kills and 36 assists while sophomore Maggie Kamp and juniors Emily Crowe and Ellie Diepersloot contributed nine kills apiece.

Calvin finished off the Friday night matches with a hard-fought comeback against No. 21 Pacific Lutheran. The team was down early once more, losing the first two sets 25-21 and 25-23. They pulled out set three by a score of 25-23 before taking set four in convincing fashion, 25-11. Calvin jumped out to an early lead in the shorter fifth set and fought off a potential comeback by Pacific Lutheran, finishing with a 15-12 win. Rietema was again the stat-sheet star, compiling 42 assists and nine kills, while Kamp led the Knights with 18 kills. Calvin also saw several players come up big on the defensive side, as four women notched at least ten digs. Senior Kristi Zietse led the way with a career-high 29. Afterwards, Rietema was thankful for the efforts of all her teammates.

“We pulled out a close one against Pacific Lutheran, but it gave us a glimpse at the heart we have as a team this year, which is be more valuable than our talent. We couldn’t have asked for a better group.”

The action continued Saturday afternoon as the Knights played ninth-ranked tournament host Puget Sound and Whitman College. Calvin came away with three-set wins in both games, 25-17, 25-22, 25-19 against Puget Sound and 25-21, 25-15, 25-19 vs. Whitman. The win against Puget Sound gave the team three wins in two days against nationally-ranked opponents. The Kamp sisters, Maggie and Stacey, combined for 13 kills in the Puget Sound game while Crowe led the Knights with 10. The Whitman game also saw Maggie Kamp set a career high with 19 kills while hitting a blistering .562. Rietema compiled 62 assists in the three-set Saturday wins and Zietse had 32 digs over the same span.

The Knights now gear up for starting the MIAA season as they play Albion, Alma and Olivet this upcoming week. “We’re excited to get back in the gym and improve our start through conference play,” said Rietema. “It was good for us to be challenged this weekend; it just makes us more excited about what’s in store for this season.”