Bolt-Heyns-Timmer dominates Battle of the Bye, looks to Chaos Day 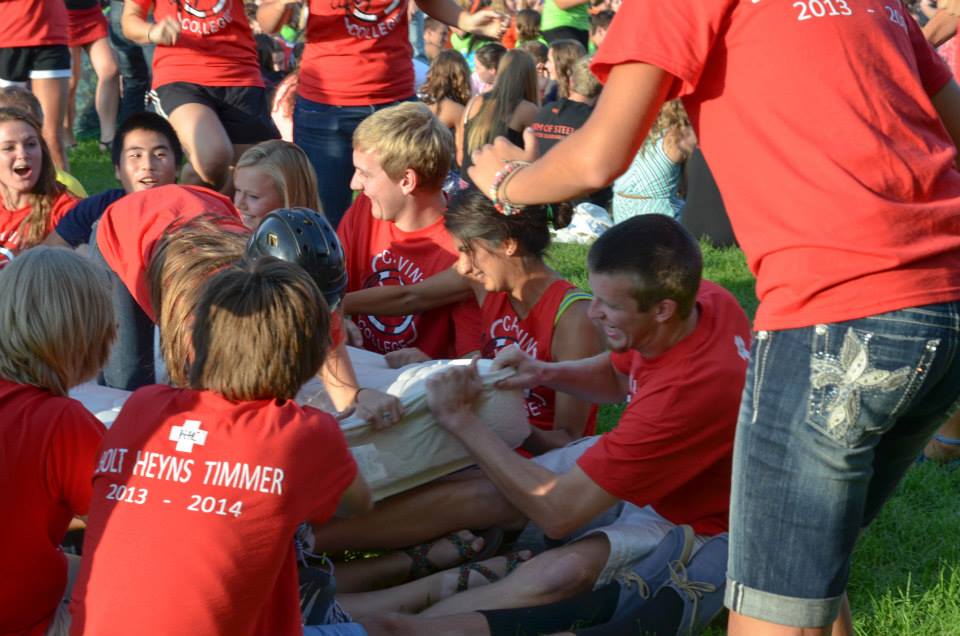 Tweet along with us tomorrow morning at @CalvinChimes! Use the hashtag #chaosday.

In a flurry of passionate red, Bolt-Heyns-Timmer (BHT) won the Battle of the Bye and is now exempt from the first round of the tug-of-war in Saturday’s Chaos Day competition.

Despite shouts of “No slack comeback!” from Beets-Veenstra (BV) and from the defending Battle of the Bye winners, Rooks-VanDellen (RVD), BHT finished the race more than two mattress lengths ahead of the next contender, RVD.

In the event, each dorm of Calvin students sits in a row and shuttle a mattress down to one end of the line and then back again.

But now, the “curse of the bye,” a legend that whichever dorm wins the Battle of the Bye never wins Chaos Day, hangs over BHT’s head.

“People that win Battle of the Bye never win Chaos Day,” said sophomore Tega Ebeye from BHT. “I think it just gets to your head.”

However, other members of BHT are holding out hope.

“I think we have a good chance,” said freshman Rachel Slottke. “We’re united. And we’re going to beat SE — that’s all we care about.”

BHT shouted its way off the mattress field with rousing cries of “BHT! BHT! BHT!” drowning out any other noise, a definite challenge to other contenders.

The Battle of the Bye was about more than just a mattress race — it was also about how much participation each dorm could muster.

“It’s not about winning … We had the most people, and we’re the smallest dorm,” said Joey Hulst from BV. “We’re not slacking: we’re comebacking.”

Tomorrow morning the dorms are set to decide who will be the true champion in 45th annual Chaos Day.

Competition will be fierce with Boer-Bennink’s (BB) green one-eyed monster staring out its challenge at contenders, RVD’s “dorm of champions” brazenly daring anyone to contend with them, and the thundering shouts of “Ra-ra-ra for Bolt-Heyns-Timmer” rising from the BHT camp.

In the face of a loss Friday night, Kalsbeek-Huizenga-van Reken (KHvR) remained optimistic.

But BHT looks to shut down the competition and break the “curse of the bye.”

Now, the students of Calvin can only wait to see how the other dorms respond: they can either lie down in front of a rising scarlet wave or fight to the top of the scrum like true champions.