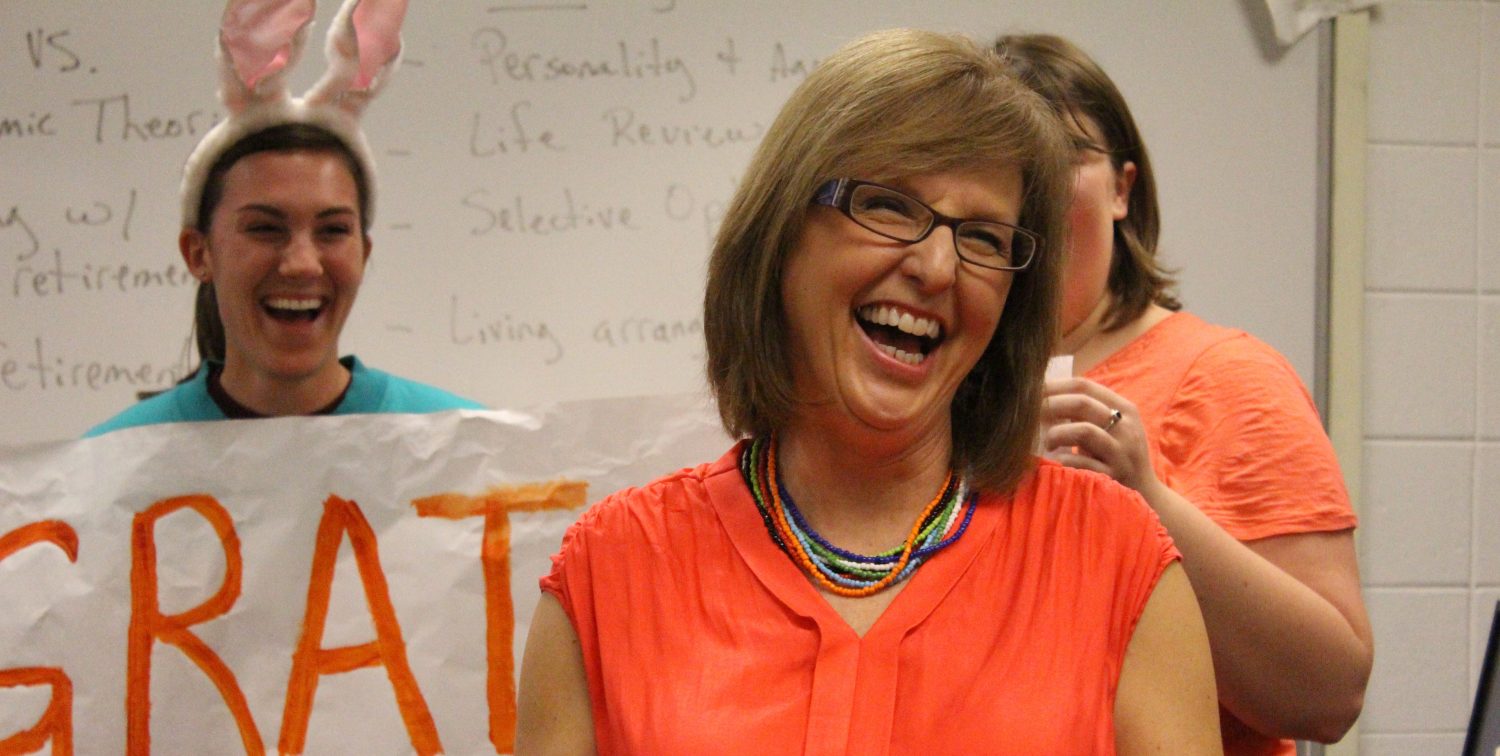 When Libby Parker’s dad passed away her freshman year, she found support in an unexpected place — her psychology professor.

“She didn’t wait for me to come to her,” explained Parker. “She emailed me my assignments and she was there for me if I needed anything.”

Throughout the rest of that academic year, assistant professor of psychology Julie Yonker took the initiative to ask Parker how she was doing, including emailing her on holidays.

“She’s just really thoughtful to take the time to remember,” said Parker. “She is really great to work with, she’s on your side and she does whatever it takes to get you through your four years.”

Parker said that this story, among several others, demonstrates the care for students that earned Julie Yonker the 2013 professor of the year award.

A group of psychology majors, professors and other seniors presented the award by surprising Yonker in her 12:05 p.m. class Tuesday with a banner and donuts.

“I’m at a loss for words,” Yonker said after the group came into the room. “And you know I talk a lot!”

“I really enjoy teaching all of you. It’s not even work: it’s the joy of being with you and with the students. It’s a true joy,” she continued.

The graduating senior class elected Yonker from a slate of professors from a range of departments. Yonker, who has been at Calvin for five years, teaches lifespan development and adolescent and adult development courses in the department.

Yonker graduated from Calvin College in 1982 with majors in biology and chemistry. She did graduate work at the University of Cincinnati and Stockholm University in Sweden before joining Calvin’s faculty as assistant professor in 2008.

She specializes in studying birth defects, cognitive function in adults and faith development in emerging adulthood.

“One class period, we put scotch tape over our eyes and cotton balls in our ears to simulate what it’s like to be old,” he said. “Then for a project, we went into a retirement community and we interviewed a person to study the life development of that person.”

He also highlighted the way Yonker integrates faith into the classroom.

“Her classes are full of great quotes and scripture,” he said. “She always starts and finishes each class with a quote or scripture verse that relates to what you’re talking about.”

Senior Rachel Whitaker got to know Yonker originally through the department and a Bible study group.

“She’s seriously the most kindhearted person you’ll ever know,” Whitaker said. “She cares so deeply for students. She’ll drop anything. She’s like my Calvin mom.”

Yonker also leads an Interim class to Europe on the European influence on psychology and religion, which Whitaker attended.

“She’s brilliant,” said Whitaker. “She’s probably one of the smartest people I know. She does really impactful research and she’s really respected for that.”

“On the trip, we had the option of going off on our own for dinner, but we always went out with her,” she continued.

“She’s also a really good baker,” laughed Whitaker. ”She bakes brownies and goodies for every meeting.”

“I think Julie has a genuine passion for her students,” she said. “She really cares about them and respects them as people. She’s really passionate about what she teaches about and I think it’s infectious.”