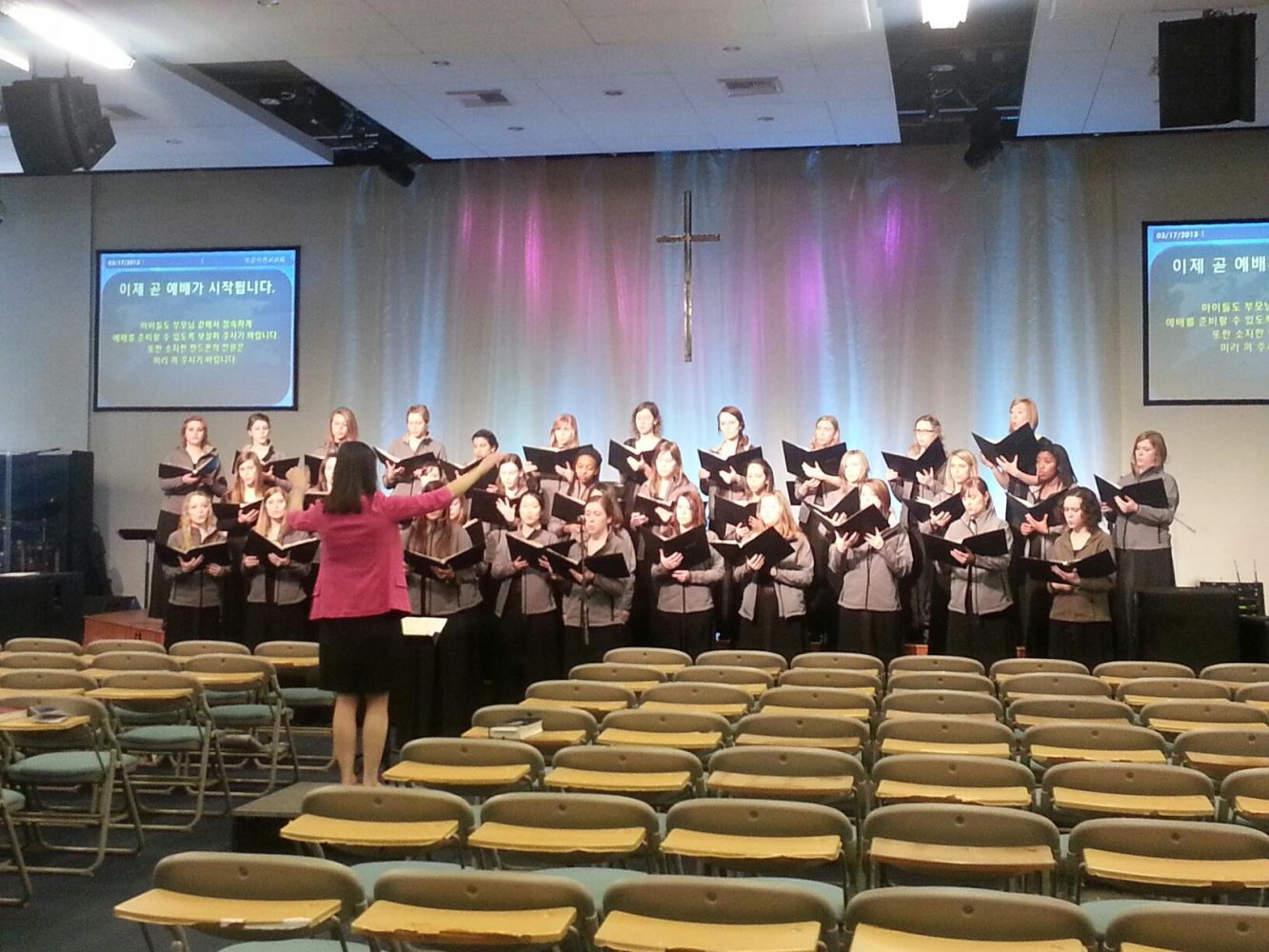 Having conducted choirs all over the world, Dr. Shangkuan, director of the Calvin College Women’s Chorale, speaks from experience when she reminds her choirs that “you never know what, when, or how people will be moved.”

That statement took on new meaning for the Calvin College Women’s Chorale on their recent spring break trip to California when they participated in the Sunday morning worship of a Korean church in the Los Angeles area.

The Monday morning following that service, one of the men from the church sat down for breakfast with President Le Roy. He was a Calvin supporter, but this was the first time he and Le Roy met.

“I want to be a witness to the work God is doing through the Women’s Chorale,” he told Le Roy.

He had been particularly moved by the choir’s rendition of the Korean folk song, “Arirang.” He explained that the song was about not abandoning those you cared about. For him, it meant not abandoning North Korea.

He explained that with most of the food from the previous year’s harvest gone and the next harvest a few months away, many people in North Korea struggle to find food during this time of year. In the past, the people of his church had worked to alleviate the hunger by sending food to the North Korean people. But because this year has been so difficult for many North Koreans, the church worried that sending their usual gift would cause more fighting and suffering, since it wouldn’t be enough to feed everyone.

They had decided not to send anything, but the man struggled with that decision. After hearing “Arirang,” he knew he couldn’t abandon the people of North Korea. He told Le Roy that, rather than giving nothing, he had decided to substantially increase his gift to the North Korean people. This way, he hoped there would be enough food for people to share.

LeRoy had already been on the road for 10 days when he met with this man. He was starting to miss his family, but he says, “hearing that was a great way to start off my time in California.”

“It’s so inspiring. Whenever I see Calvin students using their gifts to do God’s work in the world it’s inspiring,” he added.

The girls in the choir were inspired by the story as well. Junior Elena Buis shared the story with her church.

“My pastor asked a Korean member to pray for the people of North Korea. It was really profound,” she recalled.

Lyndsay DeGroot, a sophomore, thought it was cool to see how the music impacted someone.

“We don’t always know how our music affects people. I mean, we might never have known about the gift to North Korea,” she said.

Shangkuan asked about adding it, despite the secular origins, because she hoped it could be a way of connecting with their culture.

“In my many touring experiences, having my choir(s) sing a folk or traditional piece from the particular people creates an instant kind of bond. The audience or congregation appreciates a predominantly white choir taking the time and effort to learn a piece in their language,” Shangkuan said, explaining the decision.

But even she could not anticipate the impact “Arirang” would have in that church on that Sunday.

“I offered it as a gesture of friendship from the choir, with no idea of the impact it would have,” Shangkuan said. “It is a vivid reminder that God works in ways beyond our comprehension and beyond what is normally considered ‘sacred.’”

“If we create lines, [between sacred and secular] we limit our impact. We need to find God in the secular, too,” she said.

At every other church service and chapel during that tour, Shangkuan asked the same question regarding sacred and secular music. Each time, the organizers said no to the secular music.