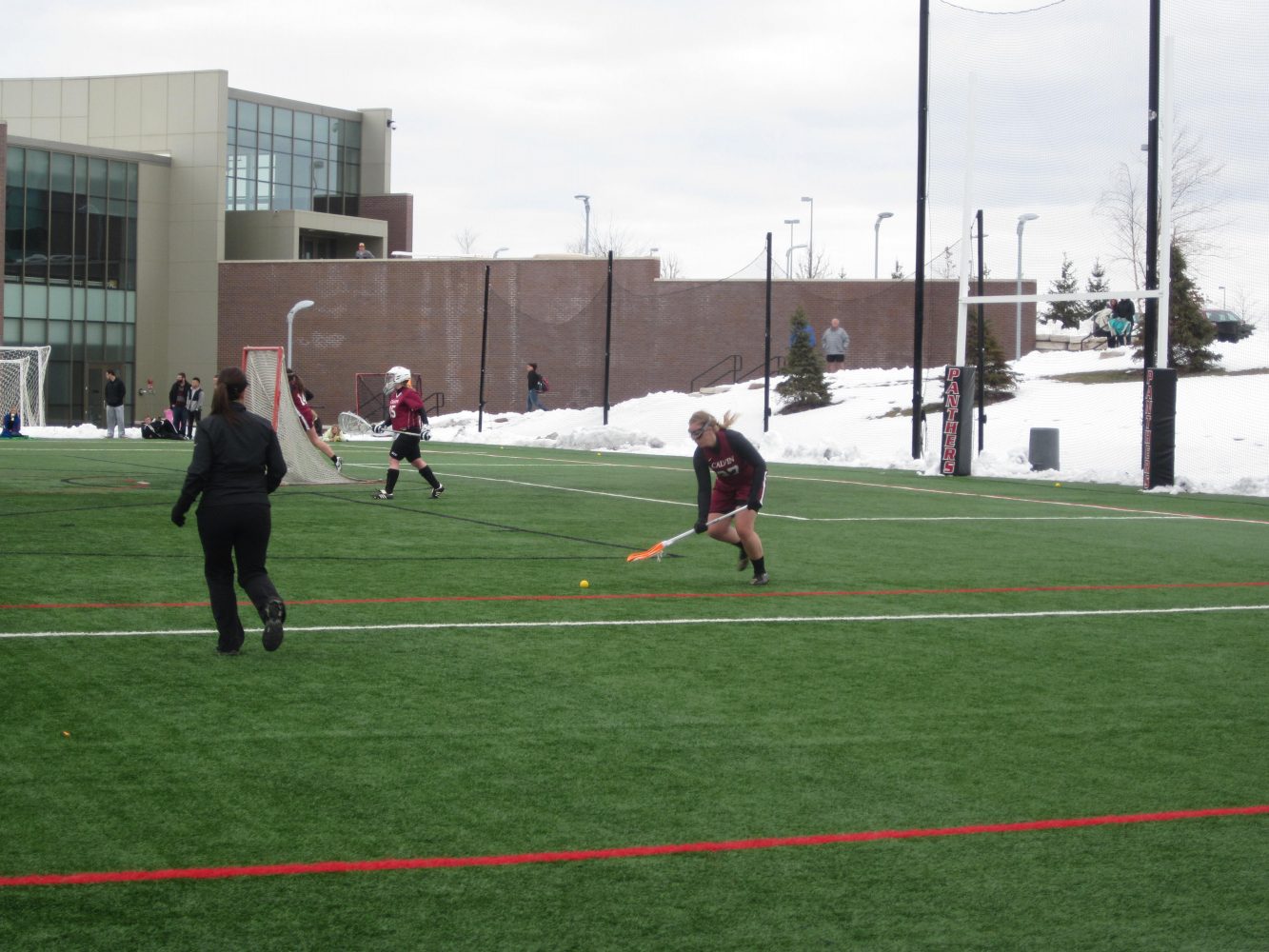 The Calvin women’s lacrosse team began their first season as a varsity sport this week, traveling to Davenport on Thursday afternoon and to College of Mount St. Joseph in Cincinnati, Ohio on Saturday.

Sadly, their first game as a varsity sport didn’t go as well as they had hoped, and the Knights fell to Davenport 16-4.

“Our game against Davenport was our first competition as a team this year, and we were all looking forward to just being out on the playing field again,” says junior Michelle Holwerda. “Davenport had just come off a successful spring break trip and came out strong against us on Thursday. They are a great team and I’m happy we got to play them this year, it gave us the opportunity to see areas where we are strong, but also areas where we need to improve.”

“I think we all were a little shell shocked on the first game coming in with a lot of players who had never played lacrosse before, including myself,” says senior Lauren Spoelstra.

The Calvin women used what they learned from their first game, however, and were able to battle back against College of Mount St. Joseph on Saturday.

“During our Davenport game, our defense fell apart a little bit and we couldn’t settle our offense, but during our game against Mount St. Joseph, we fixed a lot of our mistakes and worked better together as a team,” says Busscher. “I am very proud of every single one of my teammates and the progress we made between just those two games.”

After an intense battle, the two teams were tied at nine, sending the contest into overtime. In the second overtime, Mount St. Joseph took a 10-9 lead with 1:30 remaining. Calvin sophomore Nikita Blaauwendraat, however, answered with a game-tying goal thirty seconds later to tie the game at 10.

The two teams battled through another overtime and-a-half before the hosts netted the game-winner midway through the fourth overtime session. Pranger led the Calvin offensive end with four goals. Blaauwendraat and Holwerda chipped in with two goals apiece while Busscher and junior Christina Howell had one goal apiece. Sophomore Karissa Reed had a team-high three ground balls. Sophomore Charlsie Cole and Spoelstra split time in goal with Cole collecting one save and Spoelstra six saves.

“Our game against the College of Mount St. Joseph went a whole lot better than the one against Davenport, despite the loss,” says Pranger. “We came in with a game plan to possess the ball and be patient on offense and wait for scoring opportunities to present themselves. We executed this plan and our defense was able to play better because of that.”

The team plans to use these first games to help figure out what they need to work on and to prepare for their first conference games of the season.

“Our goals for this season are not to focus on winning game by game, but to improve all around in individual skills and playing as a team so that by the end of the season — when our record counts toward the tournament — we will be where we want to be,” says sophomore Karissa Reed. “Obviously we would have liked to come away with wins but overall we are happy with how the season has started out. We have been working hard and playing together as a team and are already improving, things are looking good for the season ahead.”

The women’s lacrosse team will host their first conference game and first home game as a varsity sport this Tuesday against Alma.