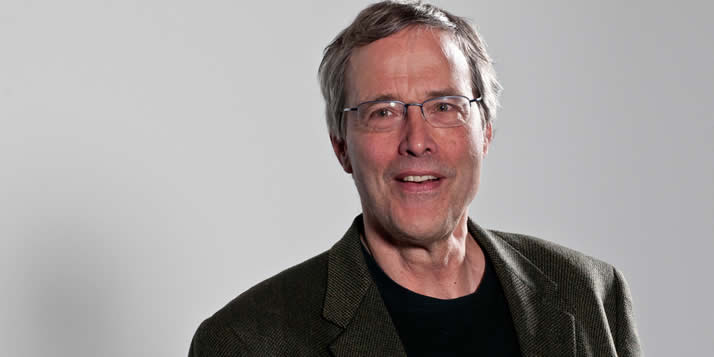 When Professor James Bratt was home sick from school as a kid, he read history textbooks.

“My dad taught history and bible. We didn’t have a TV until I was about 10 or 11, so when I would be home sick, I would just pick up old textbooks,” he recalls.

All those sick days paid off. Bratt, who has been a history professor at Calvin since 1987, recently received the Presidential Award for Exemplary Teaching from the college. It is the highest award a professor can be given. Bratt received the award at the annual Faculty Awards Dinner on Feb. 14.

Bratt primarily teaches classes in American history and the history of religion in America. His research focuses on similar areas. He specializes in Abraham Kuyper and has a biography of Kuyper coming out in a few months. He is also intrigued by religion in the quarter century leading up to the American Civil War.

“We have to study that time period without knowing the war was happening. History can go in many different ways. That generation so often gets defined in terms of the Civil War,” Bratt says.

Bratt thinks it is important to reevaluate that time period from their perspective.

“For them, the war was not the only possible outcome. The Civil War is big and important, but it doesn’t define their whole reality,” Bratt explains.

In his teaching, Bratt says he is still an “old-fashioned lecture kind of guy,” but he has come to put learning in the hands of students more often since he began teaching.

“I think I’ve learned that better learning will happen if I shut up some and just trust the students to come up with questions and trust the process. I’ve really come to see less is more,” he says.

Over his long career, Bratt has also learned to take the time to “smell the roses.” Bratt, who earned his doctorate from Yale, has accomplished a lot in his career. He has received a number of grants, published over 50 articles and written eight books. He is also a two-time Fulbright recipient. However, he says he did not slow down enough to enjoy the ride at first.

“It has been really important to me to learn patience. I always had this sense of urgency and insecurity. I’ve been blessed with a long and productive career, but I didn’t realize it until I was about halfway through it,” Bratt says.

“You do have to embrace these difficulties and injustices, but you can’t be dictated by them,” he says.

Those who have embraced those difficulties and overcome them in the past are the people we study in history class today. Their stories are the reason Bratt loves history so much.

“I always had a natural fascination with story. I’ve never felt the past is distant, or irrelevant,” he explains. “We’re part of a much older and very intriguing story, and we’re just writing the next page in a long book.”