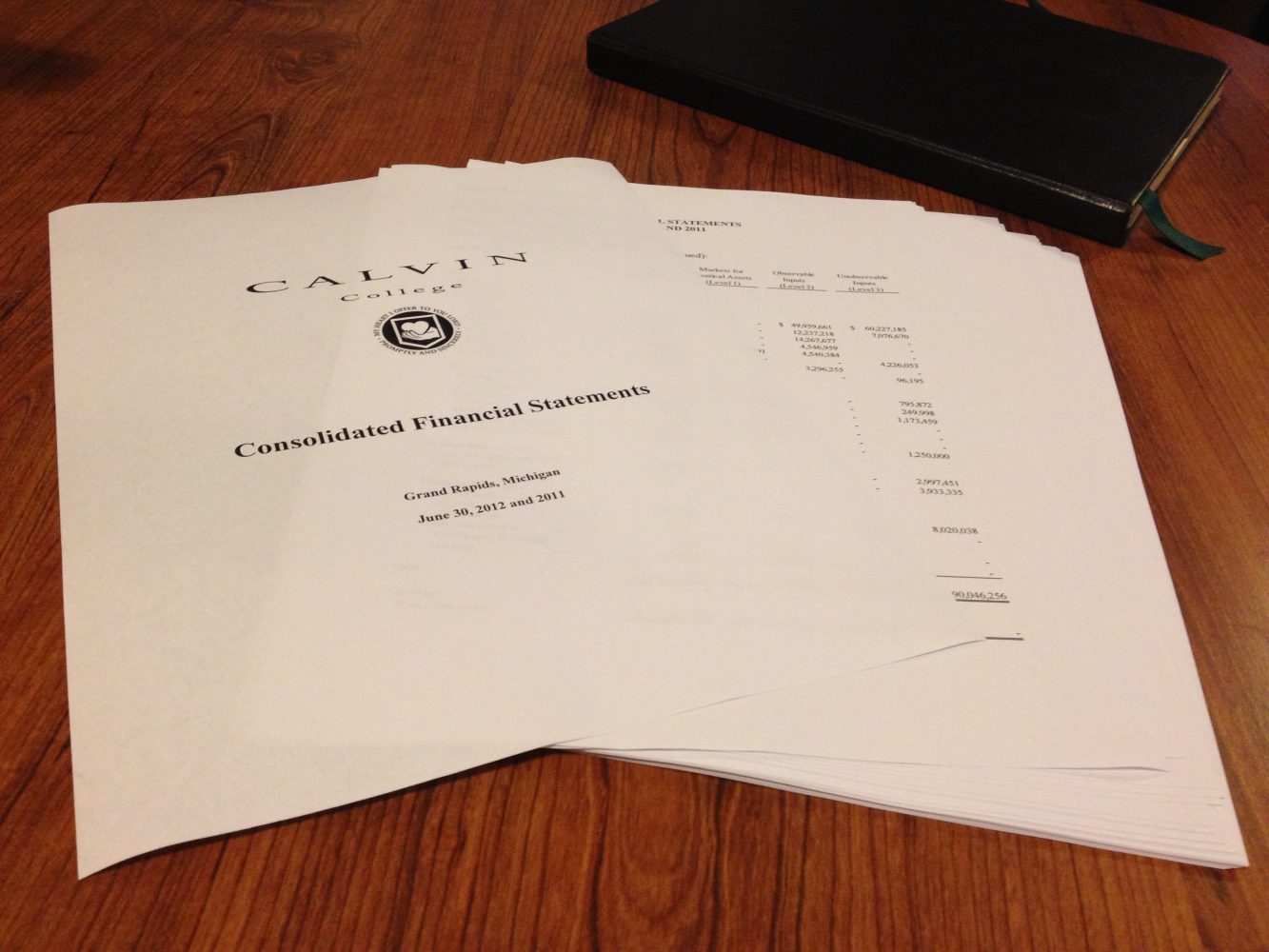 Editorial note: This article was originally published on Wednesday, Dec. 5.  It was retracted shortly after due to minor errors in terminology and a miscommunication with the administration, who later worked with Chimes to clarify the terminology and revise the story.

Calvin’s final 2012-’13 budget was approved on Nov. 15, more than five months after the start of the fiscal year.

President Michael Le Roy made the announcement to faculty senate on Monday, Dec. 3.

This year’s budget showed an unexpected cost of $1.1 million mostly due to rising healthcare costs for employees and retirees. The college covered that extra cost and helped balance the budget by taking advantage of a collection of one-time gifts.

The budget also revealed that Calvin is paying about $6.2 million annually to service its debt, a number which was not common knowledge in the past.

These payments are anticipated every year until 2017, when the amount is expected to rise.

Money from a debt service reserve account as well as outside gifts covered this year’s payment.

In spite of these recent developments, Le Roy remains optimistic.

“This is a solvable problem, but we need to be honest about ourselves,” Le Roy said in the meeting of faculty senate. “It’s going to take a while. I can’t tell you right now how long.”

Approving the budget nearly halfway into the fiscal year has been standard practice for the college for the last few years.

Calvin’s fiscal year starts on July 1. The planning and priorities committee, a group charged with the long-range planning of the college, approved the final budget at its mid-November meeting.

Lower enrollments and a difficult financial climate strained the budget, so final budget action was often delayed until those things were known with certainty.

This practice was a common college procedure under the previous administration, which included Vice President of Finance Henry DeVries and Director of Financial Services Sam Wanner, who have since left the college.

The financial services office helps the Vice President for Administration, Finance and Information Services draft the budget. The planning and priorities committee and the board of trustees must approve it.

Board members and Calvin employees would sometimes express concern over the budget timing, but no change was proposed until the change in administrations.

Le Roy plans to have a finalized budget for the 2013-’14 year in advance of the next fiscal year, which begins on July 1.

“It’s normative in higher education to have a budget presented and approved by a board in their spring board meeting, to be implemented in July,” said Le Roy.

Le Roy cited his experience with the budget process at Whitworth University, where he previously served as provost.

Since Calvin lacked a finalized budget for this fiscal year until Nov. 15, administrators did not anticipate a $2.2 million increase in the cost of health benefits for Calvin faculty, staff and retirees until October.

Although the increasing trend of healthcare costs was clear, the amount by which the costs would increase was underestimated.

In the past, Calvin would get good deals from its healthcare provider, which was motivated to supply coverage to Calvin.

Members discussed how to keep costs “within budget parameters,” according to the committee’s minutes. The committee approved the new plan design, which was presented by DeVries.

Le Roy noted that completion of the 2012-13 budget identifies a slightly larger and earlier financial pinch than previously projected, and hopes that opening up some of Calvin’s benefit coverage to competitive bidding will provide some savings.

In order to negotiate more favorable rates, Calvin asked 12 companies to bid to become the school’s intermediary between some health and retirement benefit providers. Eight have responded with an offer. Le Roy said that employees would be involved in the selection process.

Debt payment information was “not visible to most”

Le Roy also told faculty senate about a payment of $6.2 million to service Calvin’s debt, payments which were not readily displayed in prior budget presentations.

Calvin used money from a savings account to cover most of the costs, which it must pay every year until 2017.

Calvin also used two gifts of $1 million and $100,000 to partially cover the payment, but the school can’t count on those gifts in the future.

In 2017, Calvin will begin to pay off its actual debt — not only interest — which Le Roy estimates could result in payments of $9 million per year.

The debt service reserve account that Calvin used to cover its debt payment this year currently has a balance of $42 million.

Calvin is developing a plan for debt repayment after 2017 with its financial advisors.

This debt payment information was “not visible to most, not to faculty senate and not to the board [of trustees],” said Le Roy.

Despite the hardships ahead for Calvin’s finances, Le Roy and college administrators are optimistic because the college now has a better grasp on understanding the current financial situation.

“This coming budget year is going to be very daunting, but the challenges are not insurmountable,” said Le Roy.

Le Roy initiated a campus-wide prioritization process in the fall that will help the college respond to this and other financial concerns.