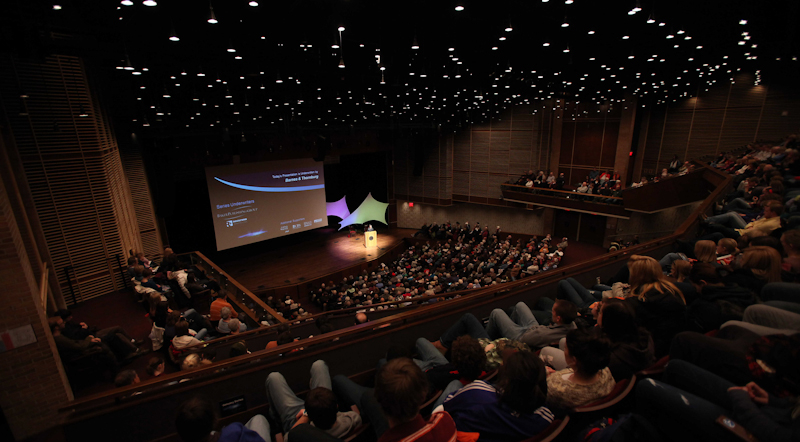 Dr. Dwight Armstrong, in his talk “Feeding the World and the Future of Farming,” highlighted the challenge of feeding the rapidly growing world population, a challenge which often receives little attention, despite the severity and broadness of the challenge, but unfortunately failed to provide an in-depth look at what the future of farming might actually look like.

He did an excellent job of hammering home the serious problem of food production, given the current population explosion. The one thing he said listeners should remember of his speech was “50, 100, 70” — the problem that in 50 years, world population will increase by 100 percent, and existing agricultural land will need to produce 70 percent more food to meet the demand.

Dr. Armstrong clearly presented the seriousness of the issue with sobering statistics on poverty, hunger and food distribution problems, in America as well as the rest of the globe. Given that the serious problem of feeding the world’s expanding population rarely gets the type of high-level attention and consideration as other issues, such as disease, natural disaster or warfare, simply raising awareness of food problems is a major success for his speech.

He also spent a large amount of his speech encouraging those who were interested in agriculture to join the National FFA Organization (formerly known as the Future Farmers of America) or pursue a career in agriculture. He joked at times about the tendency of his speech to seem like an advertisement for the National FFA Organization, of which he is the chief operating officer.

However, he failed to provide any specific solutions to the challenges facing agriculture or suggest anything that the common citizen could do to help besides pursue a career in agriculture. He noted that agriculture already looks significantly differently than it did 50 years ago, with a much smaller percentage of the population working in agriculture now than in years past, and suggested that the technological improvements that have led to these shifts are also the tools that will solve the “50, 100, 70” problem.

His ringing endorsement of technology as the prime tool for feeding the world would have been a lot more encouraging if he had discussed precisely what technologies he thought had the potential to increase food production in an environmentally sound, economically feasible and socially acceptable manner, the three factors of sustainability that he argued any solution needed to achieve.

He also took a few opportunities to criticize what he called the “food morality movement.” He scoffed at people who were worried about genetically modified organisms or milk from cows treated with synthetic hormones, and dismissive of people who were opposed to industrial agriculture or meat-eating. While some of these criticisms were legitimate — according to a study he cited there is no difference in hormones in the milk of normal cows and cows injected with synthetic hormones, and since all genetically modified organisms have to be checked with the FDA, there isn’t anything fundamentally that makes a genetically modified organism worse than all the normal organisms — he failed to address more coherent criticisms of the agricultural industry, such as some of the corporate practices of large companies such as Monsanto, the amount of fossil fuels used by the agriculture industry or the danger of creating antibiotic-resistant diseases due to the widespread use of antibiotics in the agriculture industry.

These are all issues that are wrapped up in the fundamental challenge of food production, and Dr. Armstrong is right to point to the issue of food as one of the biggest issues of our generation. However, such a broad issue, which touches on matters of economic prudence, environmental sustainability, national security, technological innovation and social justice, will require nuanced and comprehensive solutions, which Dr. Armstrong failed to present.