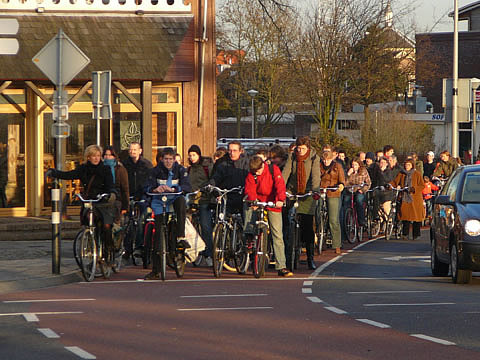 After countless papers, projects and exams, most students breathed a sigh of relief at the end of the semester. They prepared for travel home and a refreshing break from academics.

But there is one group of students that are already preparing to go back to school: Calvin’s spring of 2013 study-abroad students. For these individuals, there are still many preparations remaining for the spring semester.

Many of the students studying abroad next semester leave at the beginning of January. This leaves them only two weeks to prepare for the trip, both mentally and logistically before their departure. As a result, most of the preparation had to be done during the semester.

“We all had to apply for a passport if we had not gotten one already, which took a couple of weeks,” said Sarah Hubbel, a junior who will be studying in Honduras.

“There were a couple insurance forms to fill out, and, for our program, we filled out a questionnaire about the type of family we would prefer living with and wrote a small biography.

“I’m most nervous about moving out of the [Knollcrest] apartments. I have to make sure everything is gone by the time exams are done.”

Other students had similar loads of paperwork, although every program is different.

Junior Andrew Wade had extra forms to fill out, since his program in Oxford is not technically a Calvin study-abroad program.

“Since I’m doing a non-Calvin program, my paperwork has been doubled because I have to send forms both to Calvin and to Oxford, and my deadlines have been super early,” Wade said.

“But I had still been submitting forms to both schools up until a few weeks ago.”
Even with the substantial work to do, students said it has not negatively impacted their lives at school.

“I wouldn’t say that these preparations have gotten in the way of my school work and commitments,” said junior Kathryn Knox, “but it has monopolized my free time a little bit.”

“I think what’s been most distracting is my excitement,” Hubbel said. “I feel like a part of my heart is already there, and although I’m nervous about being away from my family and friends, I would leave today if I could.”

Hubbel’s sentiments reflect those of most of the students who will be traveling next semester. Any inconvenience it may create in the present is balanced by the benefits that students will reap from the experience.

“Thinking about the fact that I have the opportunity to study at the same university where C.S. Lewis, J.R.R. Tolkien, Martyn Lloyd-Jones and countless others have studied and taught is humbling and inspiring,” Wade said.

“I feel a strong calling to do academic theology,” Wade continued, “and the Oxford program’s emphasis on independent research will definitely give me a sense of what I could be doing for the rest of my life.”

For Knox, the program represents a chance to drastically improve her Spanish through the immersion provided in Honduras.

“I have never been able to completely overcome the language barrier that I feel when I speak Spanish,” Knox said. “I am hoping that spending nearly five months in a culture that only speaks Spanish will knock that barrier down.”

Of course, students know that not every encounter they have will be positive. Even for the most excited of students, there is always something to be nervous about.

“I am a little nervous about fitting in with my family and I’m excited to experience a new culture, but I’m anticipating a bit of culture shock,” said Hubbel, who will be living in a rural area of Honduras.

Other students expressed worry over things like financial stability, which takes on a much bigger meaning when living so far from family and friends.

“The most nerve-wracking part of this whole endeavor is the cost of living in the UK, which is apparently quite a bit higher than here in the US,” Wade said.

Despite those worries, students said hopeful anticipation outweighs any negativity.

While they welcome a break from school, their focus is already on next semester.