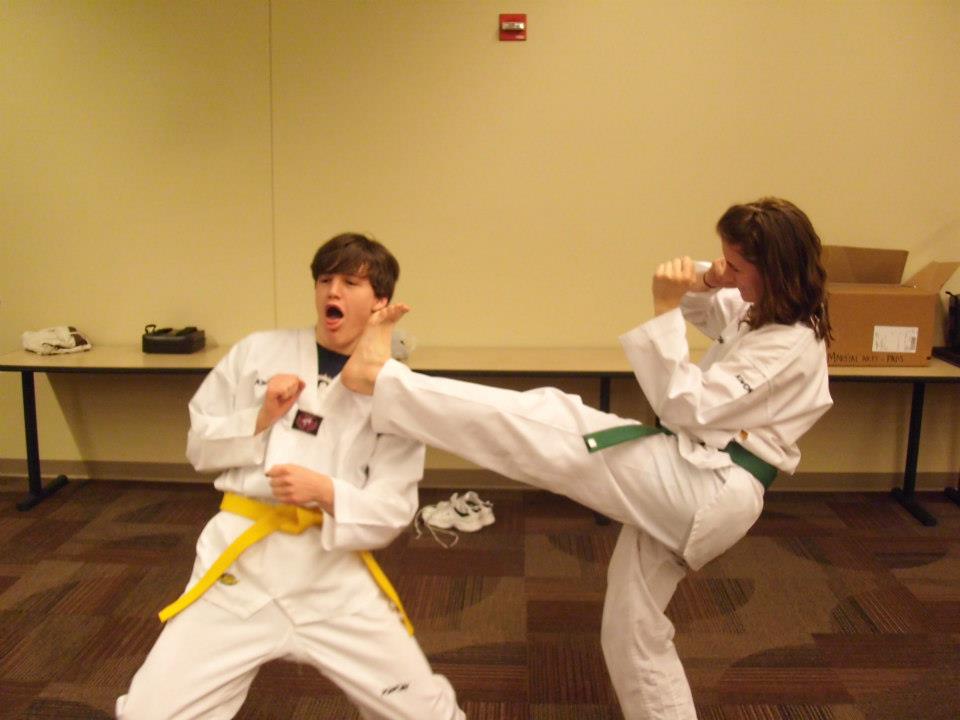 “I had always wanted to have the ability to defend myself and have an extended sense of self-discipline,” Knox said.

Knox thought she’d find that self-discipline in the National Guard, but, after applying, she began to have second thoughts. SMAC offered an alternative.

“I felt that martial arts would empower me to have self-discipline and defense without the risk of going to war. Now that I have been a part of SMAC for over a year, I also enjoy the fellowship and confidence that comes with being a part of the club,” she explained.

United by a passion for martial arts, the 15 members of SMAC gather together in room 280 of Hoogenboom twice a week to master ancient secrets of self-defense and combat.

“I have always loved the exercise, techniques and community that come with martial arts. I wanted to teach on campus because I wanted to share something that I greatly enjoyed with others,” he said.

Van Zanen has a second-degree black belt in Tang Soo Do and regularly leads the SMAC classes.

Freshman Jaclyn Kamps had always been interested in Asian culture. When she learned Calvin had a martial arts club, she was ecstatic.

“The discipline and customs that accompany martial arts appealed to me greatly. In America, we don’t have that sort of old practice that has been passed down for generations,” Kamps said.

Kamps had no background in martial arts before joining the club, but she says her experience has been positive.

“I love being able to exercise my brain as well as my body with a group of people. It is hard work, but I always feel energized and uplifted after a class,” Kamps said.

She also appreciates that despite the ceremonial, disciplined nature of martial arts, SMAC is a communal experience.

“Learning Korean and practicing the forms and patterns give the club a sort of ‘noble’ feel, yet we have a lot of fun talking, laughing and helping one another learn new steps and practice old ones,” Kamps said.

Knox enjoys the balance between friendship and challenge SMAC offers.

“We work hard together regardless of the tasks’ difficulty until we all succeed, and this provides for countless bonding opportunities!”

Van Zanen has been involved with martial arts since he was seven years old, but he still loves learning new things about martial arts, as well as sharing his knowledge with others who share his passion.

He also hopes to see more diverse martial art forms represented in the club in the future.

“We would love other instructors to contact us about teaching their styles and being involved in the club,” he said.

He hopes SMAC will become more well known among students as well.

“We want to make sure people know that we exist and that they have the option to train with us,” Van Zanen said.

Meetings normally take place on Tuesdays from 7-9 p.m. and Saturdays from 9:10-10:40 a.m. Joining SMAC is free. Members can take official belt tests for a $7 fee. According to Van Zanen, studios regularly charge $45 or more for the same tests.