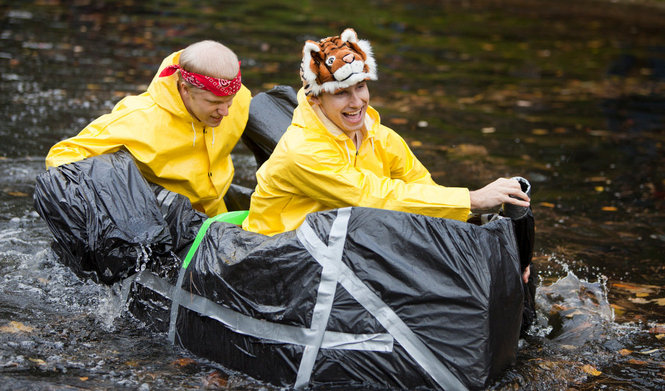 “Today is not a day you want to get wet,” said Calvin parent Rachel Kosters, looking out at the seminary pond on an overcast, 50-degree day.

Despite the cold, she and her daughter, senior Chloe Kosters, were ready to compete in Calvin’s annual Cardboard Canoe race, sponsored by Knights 4 Life and the American Society of Civil Engineers.

“Our goal for today,” said Chloe, “is mostly don’t sink.”

For the race, eight teams built canoes out of nothing but cardboard, trash bags and duct tape. They piled into their boats and raced each other around the sem pond, competing for the fastest boat, the best-looking boat and the boat that held the most people.

The eventual winner of the race, team “Shark Bait,” took an early lead, beating the Kosters’ boat in the first heat.

The members of “Shark Bait,” sophomores Steven Mulder and Joel Altena, were thrilled with their win. Mulder competed last year, and had what he called “a Titanic moment.”

“My boat broke in half,” he said. “This year I wanted to redeem myself.”

“Jess and the Johns,” a team of mostly engineers, failed to make a start with their canoe, which disintegrated almost as soon as they started paddling. “We went maybe an inch or two,” said sophomore Jessica Par.

Though “Jess and the Johns” didn’t complete the lap, the boat held up for long enough for them all to pile in, winning them the prize for most people in a boat.

The best-looking prize was snatched up again by Calvin’s Architecture Club, which has been the team to beat over the last few years.

This year’s Architecture Club felt confident about their cardboard battleship. The boat not only looked impressive with its smooth sides and duct tape guns, but it was also carefully engineered. “We had drawings, we had schematics,” said Mark Heidmann, one of the designers. “It was white-board worthy,” added senior Katie Nelessen.

The evening was filled with excitement as participants battled against disintegrating paddles and capsizing boats.

Students, families, and alumni crowded around the sem pond, cheering for their favorites, and excitement was high as the judges announced the final awards, each winning team receiving a $35 gift card to Chipotle.

“You really don’t know for sure who’s going to win,” said freshman Naomi Hansen. “I mean, it’s a cardboard boat.”

But not all cardboard boats are created equal, and “Shark Bait” was the clear winner for speed.

Mulder announced what he and Altena were doing to celebrate: “We’re going to Chipotle!” he said, holding up his prize.