Women’s golf third in MIAA, one stroke behind Hope 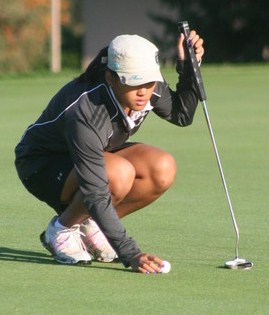 The women’s golf team competed in three competitions this past week. On Tuesday, they played in the North Central Invitational in Naperville, Ill. The Knights won this competition, shooting a collective 349, three strokes ahead of Olivet Nazarene and Carthage College.

The Knights then played Thursday in their first MIAA Jamboree of the season in Olivet. The finished tied for third with 338 strokes with Saint Mary’s College. Hope took second, two strokes ahead of Calvin.

Doezema shot a 79 to lead the Knights and took second individually. Canto shot an 83 and finished tied for sixth. Poole and Harkema shot 87 and 89 respectively and took 13th and 20th places. Whitaker again shot a 97.

Calvin’s last competition of the week was on Saturday at Alma for its second MIAA Jamboree. The Knights finished second with 335 strokes, 15 strokes behind MIAA-leader Olivet.

Canto shot an 80 for third place individually. Doezema and Poole shot 83 and 84 respectively for sixth and 11th places. Harkema shot an 88 and Whitaker shot a 90.

The Knights are currently in third place in the MIAA standing behind Hope by one stroke. They play again on Wednesday, Sept. 26, at Saint Mary’s.