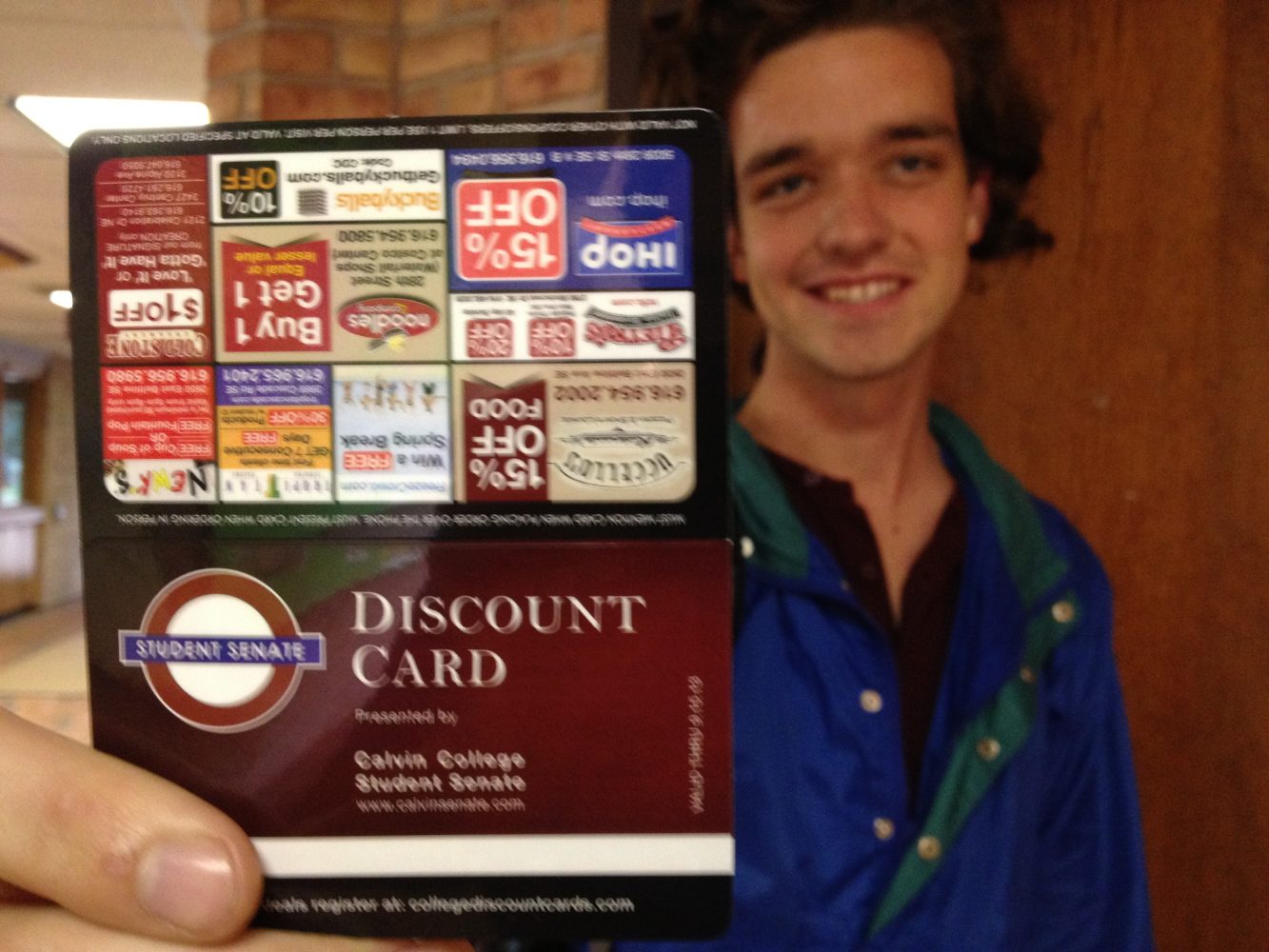 “Student senate is thrilled to provide the student body with this amazing service,” said student body president Yeaji Choi. “I am confident that many individuals and groups of our community will be blessed by this program.”

The cards cost $3 and will give students access to discounts at nearly 30 businesses.

Most of the participating locations are restaurants, but there are other types of businesses as well, such as Great Clips (offering a $9.99 hair cut), Celebration Cinema ($8.50 movies) and TCP Paintball (free rental package and air refill).

Among the list of restaurants participating, Calvin students are offered multiple types of eateries. If fast food is a frequent stop, students can get deals at Taco Bell, Domino’s Pizza or Dairy Queen.

Other students, such as junior Sarah Hubbel, love the program’s focus on supporting local businesses.
“I think the discount card is a great idea, but especially for the businesses that are specific to Grand Rapids, in order to support the community,” said Hubbel after being introduced to the program.

By partnering with such businesses, this year’s senators believe that they can encourage students to branch out from Calvin’s campus.

“Historically senate has been criticized for focusing on initiatives that serve the underclassmen,” said Choi.  “With this program, senate seeks to provide a service not only to the underclassmen, but also the upperclassmen, faculty, and staff — the whole Calvin community.”

“I would definitely use these discounts,” said junior Andy Krafft as he scanned the list of participating businesses. “Taco Bell is awesome, but free Taco Bell is even better.”

The program, which has been in progress for several years, has been finalized under this year’s executive team, with a lot of the work happening this summer.

“Senate has spent a lot of time this summer researching different available discount options, said Choi. “We think this program best meets the needs of the Calvin population.”

Under this program, students would purchase customized discount cards at a cost of $3 per person.
“After intense discussion, we decided to sell the cards at $3 because this will allow the program to pay for itself, without gaining any profit and without any spending of tuition dollars,” said Choi.

While it may seem slightly inconvenient to give up a few dollars for a plastic card, it seems that most students will still participate.

“Only three dollars?” questioned Krafft when told the specifics about the program. “I’m pretty sure that the 25 percent off a meal at Electric Cheetah pretty much takes care of that.”

Senators pointed out that the value of the card is confirmed by other deals as well. For example, getting $10 off an oil change at Firestone would quickly take the place of the initial $3 charge.

Students can pay their $3 and begin saving starting on Monday, Sept. 24.

“There is a limited supply,” said senator Colin Chesla, “so I’d encourage students to buy them sooner rather than later.”

Any current Calvin student can purchase the card from the dorm deskies from Sept. 24 until Oct. 1. The cards will be on sale until supply is gone in the senate office or the campus store (where students’ miscellaneous accounts can be used). Student senate will also have a table in Johnny’s from 10 a.m. to 2 p.m. and 8 p.m. to 10 p.m. on Sept. 24-25.