No. 2 Knights’ volleyball downs rival No. 4 Dutch in first meeting of the season 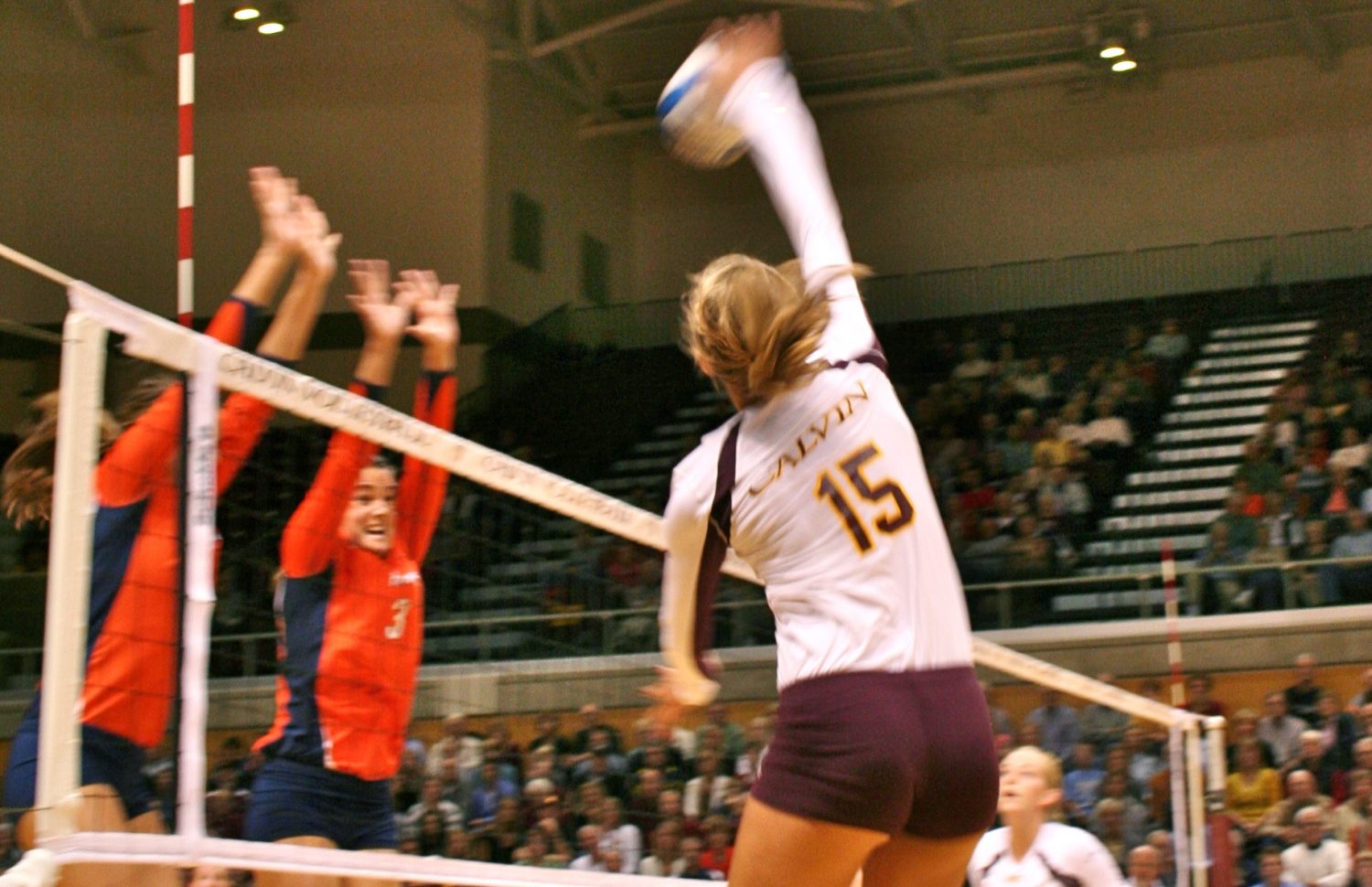 “We played as a team,” said freshman Maggie Kamp. “Everyone was really supportive and we played with confidence.”

About 2,500 Calvin students, athletes and coaches were in attendance. The student section, wearing all black, caused a ruckus for its team.

“The fans were sick,” said sophomore hitter Elise Biesboer. “We were sitting in the locker room thinking ‘we’ve never heard the fans this loud.’”

In the hotly contested first set, neither team was able to gain a significant advantage. Each team traded points for the majority of the set, and Calvin could not hold on to a brief five-point lead. Not even a crafty fake by junior setter Megan Rietema to tie it at 24-24 could save the Knights, who lost the next two points and the set.

Calvin responded to the adversity with a confident second set. A balanced attack allowed the Knights to pick apart Hope’s defense en route to a 25-15 set victory.

The Knights took that momentum into the third set and fought back a resilient Hope team. At set point it was senior Lizzie Kamp with a viscous kill down the line to book it at 25-23.

Hope jumped out to an early 6-2 lead in the fourth set, but a Calvin timeout reorganized the attack, quickly reviving the team and tying the set 6-6. Short runs by each team characterized the fourth set until the Knights could sense the win going up 17-13.

The Dutch roared back and brought the set to within one, but Calvin once again remained composed and claimed the match with a 25-21 fourth set win.

The Knights have bounced back from their first loss of the season: this was their second win in a row since the loss against top-ranked Washington University of Saint Louis last Friday.

“We served really well today,” said Amber Warners, the Knights’ head coach. She added that cutting down on their mistakes was the key to coming back from the first set loss.

Senior Julia Hilbrands also had an impressive .500 attack percentage on nine kills. Rietema, who finished with 58 assists, facilitated much of the Calvin onslaught.

That attack was certainly needed, as Hope put up 11 total team blocks. Calvin countered with 6.5 team blocks and consistent digs from seniors Kelly Gordon-Hiskes and Jen Pluymert who had 18 and 16 digs, respectively.

“Our block was a little early tonight,” said Warners about the Knights’ performance. “Our timing needs to be a bit better.”

While the Knights recognized room for improvement, the players relished in their victory Friday night.

“There isn’t a better feeling than beating your rival,” said Maggie Kamp.

Warners commended the Dutch on their resilience. “Both teams are really solid and it’s gonna be a war all year,” she said.

The Knights are undefeated against the Dutch since the Knights’ championship run of 2010.

The Knights have to remain focused after the win: they travel to Trine Saturday afternoon for a conference matchup. Trine is tied with Hope for second in the MIAA with a 5-1 record.