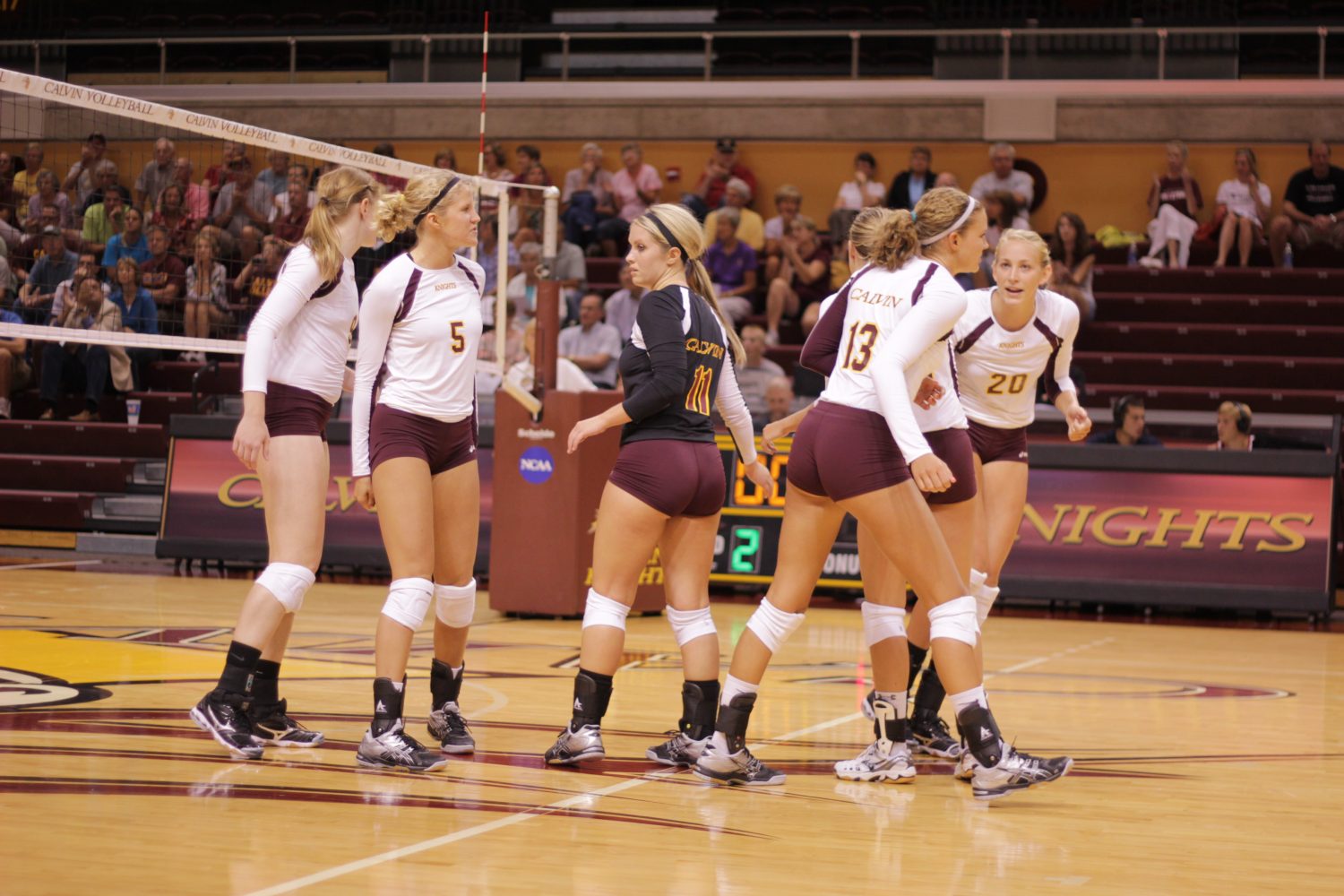 Playing against arguably its highest competition all season long, the Calvin volleyball team went 4-1 last week as it faced undefeated Alma in conference play and three top-25 schools at the Wittenberg Fall Classic.

Against Alma, the Knights jumped out to an early lead in the first set and would not slow up in route to a 25-12 win. In set number two, Alma played tough and showed Calvin it would do anything but roll over for the third-ranked team in the country by defeating the Knights 25-20. Calvin was forced into a number of uncharacteristic errors in set two. In the third set, the Knights struggled to shake the Scots early on but closed them out by scoring five of the final seven points to win 25-18. In the fourth set, Calvin showed why it is considered one of the best teams in the country as the Knights took complete control of the match, out-hitting and out-playing the Scots to a 25-8 fourth set win and a 3-1 victory.

Senior Lizzie Kamp had a career match, tallying 25 kills on an outstanding attack percentage of .523. Also contributing in the front line was senior Julia Hilbrands who had 11 kills on a .409 attack percentage. Junior setter Megan Rietema had 50 assists for the Knights while seniors Kelly Gordon and Jen Pluymert and junior Kristin Zietse all had fantastic games on the back line for Calvin, adding 15, 14 and 12 digs, respectively.

Calvin then travelled to Wittenberg University in Springfield, Ohio to face some stiff competition over the weekend at the Wittenberg Fall Classic.

Friday night, Calvin faced the top-ranked team in the country in the Washington University of Saint Louis Bears. Both teams played very well in what turned out to be a thrilling, five set match. The match would fall the Bears way as they took the meeting between top-ranked teams.

Calvin took the first set 25-20 to get a jump on the Bears. In the second set, WashU earned the hard-fought 26-24 win. In set three, Calvin received strong play up front and made a number of key blocks at the net to take the crucial third set. WashU, showing why it is considered the top team in the country, came roaring back in the fourth set with a 25-15 victory. In the fifth set, Calvin took the lead early but the Bears rallied back to take the lead late.

The Knights fought off three match points but could not retake the lead, and Washington University took set five 18-16 to win the match. Lizzie and Maggie Kamp had 18 kills each for Calvin. Gordon and Pluymert each had double-digit digs with 25 and 12, respectively.

The Knights, not able to dwell on the tough loss for long, turned around Saturday and faced No. 2 Wittenberg and No. 21 Heidelberg. Calvin opened up the day against host Wittenberg and earned an impressive three set victory over the Tigers, 25-20, 26-24, 25-21. Lizzie Kamp paced the Knights with 16 kills and seven digs on the day. Rietema dished out 27 assists while adding 15 digs and seven kills for a great all-around game while Gordon had 15 digs.

Calvin then finished out the tournament against Heidelberg. The Knights took their second match of the day, this also in three sets, 25-18, 25-23, 25-19. Lizzie and Maggie Kamp each had 10 kills while Crowe added nine and Hilbrands had seven. Gordon tallied 12 digs for the Knights.

Calvin finished the Wittenberg Fall Classic with a 3-1 record. Also finishing at 3-1 were Washington University and Hope College. Host Wittenberg finished at 2-2.

The Knights now look forward to Friday evening when they will host rival Hope at Van Noord Arena. The highly-anticipated matchup is slated to start at 6:30 p.m.