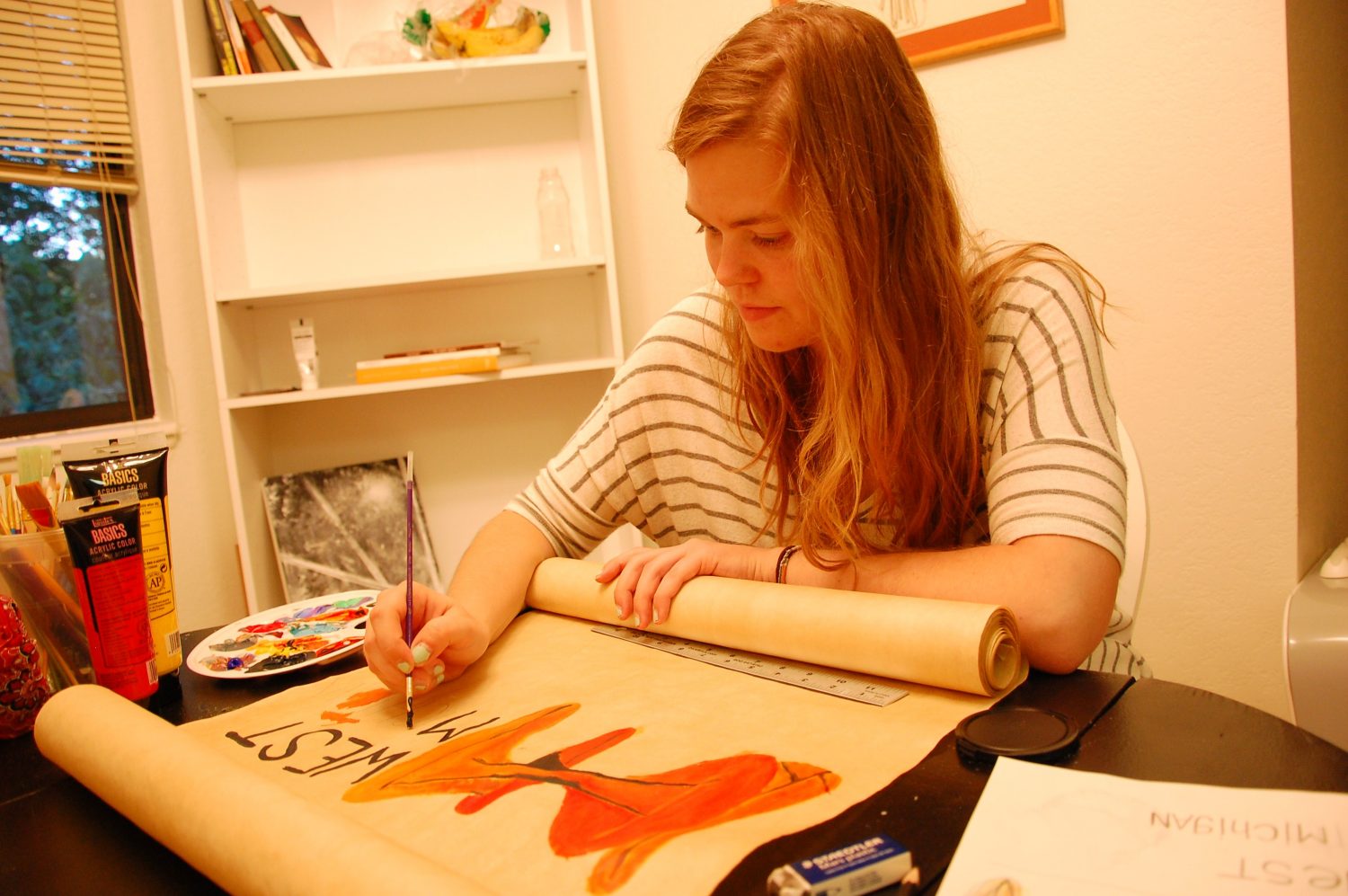 Senior Lydia Mulder created the artwork for this year's summit.

“The goal is to remind our entire community that we are all educators, and that we all play a part in improving literacy in our community,” said Lindsay McHolme, CLI’s director.

“We expect up to 300 people at the summit,” McHolme said. “We expect people from all sectors to attend the summit; it is not a conference solely for teachers and educators.”

CLI and its summit seeks to reduce that number by empowering community leaders, parents, and residents. The Community Literacy Summit will run from 8:30 a.m. to 2:45 p.m. in Grand Valley’s Eberhard Center.

George Heartwell, Grand Rapids’ mayor, and Barbara O’Brien, former lieutenant governor of Colorado, will both deliver keynote speeches the morning of the summit, as will several other literacy champions.

Anneshia Freeman, an addiction counselor in Grand Rapids, will share her own experience and passion for literacy. Freeman grew up in Detroit amid poverty and abuse, and she later slid into cocaine addiction and prostitution. She left that culture in August of 2000, earned a master’s degree in business administration and became a certified addiction counselor.

In the afternoon, summit attendees will have the opportunity to attend a selection of 17 workshops. Workshop topics will include workplace literacy, digital literacy and child literacy. Other sessions will describe the work of teaching survival English to refugees, the importance of cultural competency in reaching the Hispanic population and the operations of other literacy-improving initiatives in West Michigan.

The summit will also feature the Right to Literacy Scroll, complete with a West Michigan banner designed and painted by Calvin’s Lydia Mulder, a senior art student. The scroll began at a 2009 literacy convention in Buffalo, NY, and symbolized the convention’s goal: complete literacy through complete community engagement.

The scroll has since traveled across the country, recording signatures of those who support its cause — a number that now numbers over 35,000 and includes the signatures of Barbara Bush, Maya Angelou and Ralph Smith.

Anyone interested in signing the scroll can do so at the literacy summit. Hopeful signatories can also find the document at Sparrows Coffee, Tea and Newsstand Sept. 14 to 16, the Grand Rapids Children’s Museum Sept. 20, or a variety of other Grand Rapids locations throughout mid-September.

The Literary Center of West Michigan, of which CLI is a part, is a nonprofit that was founded in 1986. Its Adult Tutoring Program, Family Literacy Program and Customized Workplace English Program impact over 1,500 adult learners. These programs offer both free and fee-based instruction to those struggling with literacy.

The Literacy Center has an ongoing call for volunteers, a call open to Calvin students.