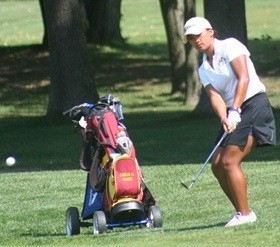 Carlia Canto led the Knights to sixth place over the weekend. Photo courtesy of calvin.edu.

The women’s golf team finished sixth in the 12-team field in the two day Olivet Tournament. They finished with a total of 712 strokes on 36 holes.

On Friday, Calvin shot a 362, which was good for seventh place on the day. Junior Carlia Canto shot a 78 to lead the Knights. Freshman Casey Harkema and senior Elise Doezema shot a 91 and 92 respectively. Senior Rachel Whitaker shot a 102 and freshman Shara Reynolds shot a 108.

On Saturday, Calvin reduced its score by 13 strokes. The Knights recorded a score of 349. Canto shot a 79 to finish in second place. Doezema shot a 85. Harkema shot an 89 for her collegiate-best round. Whitaker and Reynolds shot 96 and 110 respectively.

The Knights compete again on Sept. 18 in the North Central Invitational.